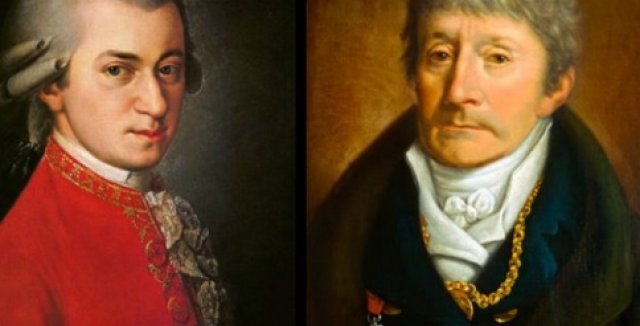 Dell’Arte Opera does a great service to the world of opera. Young talent emerging from studies get a chance to apply what they’ve learned to the demands of performance and then strut their stuff before an audience. Conductors Whitney George and Chris Whittaker captured the spirit of the music and the singing.

In Vignettes from Vienna, we enjoyed performance of selections from Mozart’s Cosi Fan Tutti and Marriage of Figaro. Salieri’s Falstaff provided additional humor. Of particular note were performances by Will Esch, who has a dramatic stage presence and an evenness of tone which as it develops will undoubtedly attract attention. Heather Bobeck, Eise Kakacek and Jay Chacon also stood out.

The highlight of the evening, however, was not Mozart’s stand-alone music. We were treated to a performance of Nikolay Rimsky-Korsakov’s Mozart and Salieri, into which the composer interwove Mozart’s music as an organic part of the story.

Rimsky-Korsakov lifted the libretto from the poem Mozart and Salieri by Alexander Pushkin almost verbatim. An English writer, Bryan Proctor,  had attracted Pushkin. Proctor created a character study designed to show the impact of envy on Salieri, and floated the never-substantiated rumor that Salieri had murdered Mozart. Pushkin adapted this version of the story.

Pushkin's attraction to both composers is evident in the opera. Salieri is a sensitive and intelligent man of considerable talent and fine musical discrimination. He acknowledges his rival’s greatness. His envy overflows as he realizes Mozart's superiority. Mozart, he knows, has something more than intelligence or even talent. He has genius.

Art for Mozart is vitally important but it is also part of the world as a whole. Mozart has time to play with his son, and report to his wife that he will not be home for dinner. Mozart is so full of joy, that Salieri sings, "Mozart, you do not deserve yourself."

Mozart enters Salieri's home, accompanied by a blind beggar who has picked up on the street and brought to perform.  The beggar muddles Mozart’s music on the violin. Salieri scoffs at the performance, which Mozart enjoys. Mozart erupts from a spontaneous acceptance of the world as it is and creates works of art which obey his own rules, not those imposed by others. Bound by convention, Salieri identifies this as a genius to which he is not privy.

To the Pushkin poem, Rimsky-Korsakov brings beautiful music, rich in a wide variety of emotional overtones. In this performance, the two young singers stand out. The lead character is Salieri, sung by Nobuki Momma with a deep appreciation for the complex role. He moves us to sympathize with a murderer, as he weaves in and out of envy and the temptation to exact revenge. As he prepares to poison Mozart, he begs him to pour notes into his soul.

Mozart interpreted by Gabriel Hernandez is joyful and almost innocent. He is not silly, but rather someone who finds life irresistible. The contrast between the two men is evident, but Mozart does not see it. Salieri is deeply effected. After all, he has worked so hard and can never achieve Mozart’s level. Listening to the Requiem, which Mozart plays in a bar and which then concludes the opera performed by a live chorus,we know that Wolfgang had a premonition that he was going to die soon. He exits feeling ill. Jason Goldberg directed the action with sensitivity and close attention to the emotional arc.

Pushkin and Rimsky-Korsakov may both have identified with Mozart, but in words and music they make Salieri a compelling and sympathetic character. Momma captures this depth fully. He is an exciting baritone and we look forward to seeing and hearing him often.

Dell'Arte captures this legend with an elegant intensity.