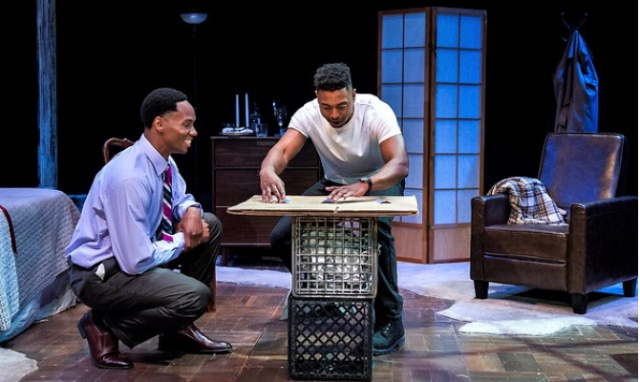 Directed by Regge Life Shakespeare & Company is presenting a riveting, superbly acted production of Topdog/Underdog by Susan-Lori Parks. It premiered in 2001 at Public Theatre in New York City. The next year it opened on Broadway, at the Ambassador Theatre, where it played for several months. In 2002, Parks received the Pulitzer Prize for Drama and the Outer Critics Circle Award for the play. It received other awards for the director and cast.

With cruel irony she named siblings Lincoln (Bryce Michael-Wood) and Booth (Deaon Griffin-Pressley). In a contemporary telling of a Biblical tale she might well have named them Cain and Abel.

They are tough street hustlers struggling to survive. Booth is a booster (shop-lifter) lacking a moral compass. Lincoln, five years older and dramatically more mature, has given up the life.

We first encounter Lincoln making an oddly spectral appearance dressed as Abraham Lincoln with signature top hat and beard. (The costumes are designed by Stella Schwartz.) He is grotesquely made up in white face. Expressing layers of repression and humiliation he is making an “honest living” at an arcade. He is coming home from a slow mid-week day. On weekends the arcade is “jumping.”

The gig, easy work as he argues, entails just sitting there. Patrons sneak up like Booth and shoot him in the back. It’s a minimum wage job but he brings home the bacon. We learn that he is about to be let go and replaced by a dummy.

It’s a far cry from the sporting life when he took home $1,000 a day as a master of a street hustle, three-card-monty. Under obscure circumstances a member of his team died. He also is haunted by memories of bilking marks out of their life savings. That entailed any and all lured into making a quick buck including an enraged welfare mom who gambled a relief check. It's primarily black on black crime that exploits the urban poor and vulnerable.

The scam entails a team. There are a couple of shills who easily win bets. A lookout warns when to fold and run. An enforcer packs heat in the event of an angry loser. Then there is a second in command to lure in passing suckers.

With remarkable legerdemain the dealer displays three cards. One is red and the other two black. He urges the mark to come close and look hard. There is a demonstration of the quick shuffle then the card is shown. It’s demonstrated a couple of times and made to seem easy. When money is down it’s anything but.

Booth wants to get in on the game. So much so that he insists that he be known henceforth as Three Card. When Linc is at work we see him practice. He feels that his deceptive skills as a booster will easily transition to three-card-monty. If only Linc will show him the tricks. It’s a big ask.

When Lincoln went off the game with resultant reduced income his marriage fell apart. That started in the bedroom and he ended on the street. As a “temporary” move he is bunking with Booth. It’s a squalid SRO (single room occupancy) with no running water or cooking facilities, and bathroom down the hall. Lincoln brings home Chinese takeout.

With an aversion to work Booth is dependent on Linc’s paycheck. There is an end of the week ritual as it is parceled out for rent, utilities, food and phone. They argue over the latter but Booth insists on it to get calls from potential dates.

Parks has many compelling metaphors for how these black men have been deprived of dignity. Booth conveys that the world owes him something. Those big department stores he rips off are greedy corporations ripping off the people. Boosting is a victimless crime. The card scam is not. You look victims in the eye and rob them blind. Lincoln has lived the life and knows the difference.

They are brothers but as conflict escalates to rage are they really? Brothers that is. It seems that their parents both had lovers. Booth describes encountering her Thursday man. He was bribed to keep his mouth shut. Their father was a drunk who named them as a joke.

When the parents split they were each given an “inheritance” of $500. Linc used it to bankroll his con and Booth saved his. The older brother sheltered the younger one and kept him out of foster care.

After the setup of the first act the second accelerates at warp speed to a stunning and tragic conclusion. It was so wrenching that the actors were still deep in character during curtain calls. It’s not something that they were able to snap out of.

Everything about this production is massively brilliant. That starts with a masterful and executively crafted script. It is indeed both contemporary as well as Biblical. Life has brought out every nuance of the writing and facilitated the very best of richly gifted players.

They are conveyed as similar, brothers, but as different in moral fiber as Cain and Able. In the most primal manner we watch the conflict of good and evil. This most ancient of conflicts is played out in utter squalor and desperation.

It is as raw and basic as the struggle for survival that turns brother against brother.

Having lost that humiliating job in the arcade, as a last resort, Linc is back on the game. When Booth gives him the boot he has the loot to split. But the younger brother, in a rage, insists that Linc throw the cards one more time and pass on tricks of the trade. Linc insists that Booth isn't ready and likely never will be.

In musings that seem taken from Magister Ludi by Herman Hesse Linc reflects on what it is to be a master of the game. It is as all consuming as the essence of life itself. The contest/ conflict with the mark, in this case his brother, is total, brutal, ruthless and humilitating. To win goes beyond picking up the pot. It means stripping the opponent of every shred of identity and dignity. The destruction is utter and absolute.

Particular kudos to the actors for mastering the skills of the game with compelling conviction. We witnessed the game with absorbing attention. Linc aptly demonstrated superior chops and subtle movement. He had the soft touch that Booth will never master.

In the end it takes more than DNA to play the game. Some have it and others don’t.

That’s one of many tough lessons to be learned from this stunning production. It’s on the short list of best performances of this Berkshire season.