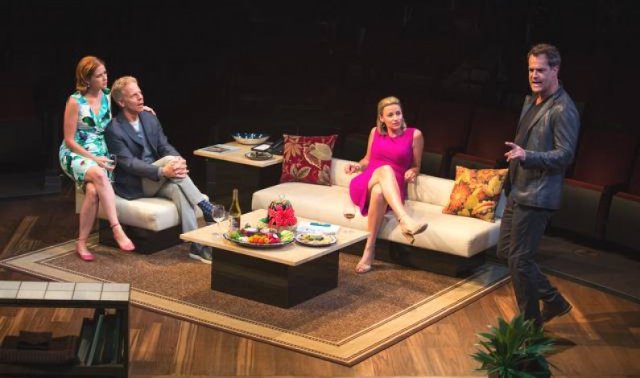 from left) Jenna Fischer appears as Corky, Greg Germann as Norm, Alexandra Henrikson as Laura, and Josh Stamberg as Gerald-Photo by Jim Cox 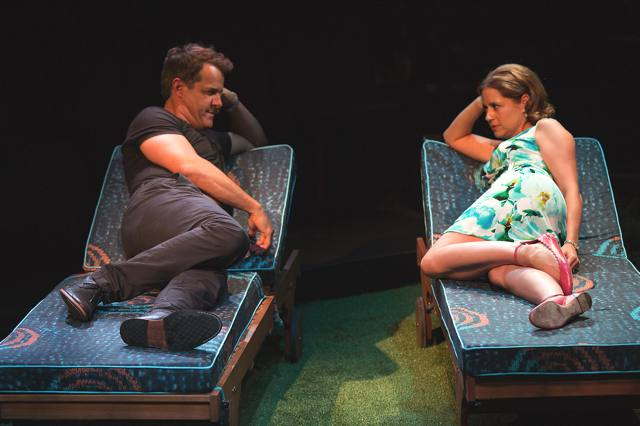 Steve Martin is a multi-talented creative artist and performer that has reached back with his new play to his 1960s counter-culture days on the Smothers Brothers TV show, where he played a wacky guy who dispensed cheeseburgers in comedy skits to the delight of his young audience.

Fifty years later those earlier audiences are now in their 70s and 80s and Martin is still drawing them into his comedy orbit; only this time he’s the playwright, not that goofy cheeseburger slinging performer.

“Meteor Shower”, his latest play, is currently wowing audiences at the Old Globe with his far-out sense of humor that deals with the social mores of 1990s California. It has already been extended twice. Martin’s cleverly crafted comedy, peppered with adult situations and dialogue, is wickedly directed by Gordon Edelstein, artistic director of the famed Long Wharf Theatre of New Haven, Connecticut.

California, some claim, is a state of mind. In the past, it has dealt with flower children, Timothy Leary and LSD, Haight-Ashbury pot, TV driven mega-churches, along with evangelism, auto-centric grid-lock traffic and a host of fads too numerous to mention. Guess what? California is still here. The life-style and the weather in the Golden State is still a dream that beckons and is worth pursuing.

“Meteor Shower” is a fresh comedy take on those wild and crazy days of the sexual revolution in the '60s. Martin sets his production in Ojai, California, a community about 90 miles east of Los Angeles. In short, the action revolves around Norm (wackily played by Greg Germann) and his suburban wife Corky (Jenna Fischer) who invite another couple Gerald (an over-the-top narcissist/stud played to the hilt by Josh Stamberg) and his predatory wife Laura (sexily played by Alexandra Henrikson) to a backyard party to watch the evening meteor shower in the night sky.

As the stars come out and the cocktails flow, tempers flare, and the sparks fly – literally, according to program notes (but no spoiler alerts at this time). The dialogue and adult situations are not out of Edward Albee’s playbook as in Who’s Afraid of Virginia Woolf?” , but are more in line with a super cool Neil Simon-like comedy spiced with touches of very sophisticated ‘naughty’. However one views it, the play is pretty damn funny, at least it was the night I attended. Judging by the laughs, I would say the females in the audience caught more of the essence of the dialogue and situations than the gentlemen by far.

When one stops trying to figure out where this story is going and just lets the surreal action unfolding on the stage wash over oneself, you will have a much more enjoyable experience.

How could one not enjoy it? Director Edelstein has gathered four talented farceurs who know their way around a farce production when they find themselves in one. Mr. Germann is a comic delight with rubbery facial expressions that speak volumes along with posture and great timing. Ms. Fischer, the epitome of reserve in Act I, is a revelation in candor in Act II; a delicious case of the worm turning.

Mr. Stamberg is the kind of preening, no-woman-can-resist-my-charm male party guest you would love to spill a tray of drinks on. Ms. Henrikson, as the predatory Laura, does her best in that svelte red sheath with ruby-red lips to match as she unnerves both Corky and Norm.

Martin’s dialogue sparkles in a surrealist way, as long as you’re on his wavelength. If you’re not, you may miss his comic thrust of situations some think they would like to find themselves in. But, be careful what you wish for…

Meteor Shower” is a highly entertaining comedy production that performs in the round on the Sheryl and Harvey White Theatre stage and will run through September 18, 2016.