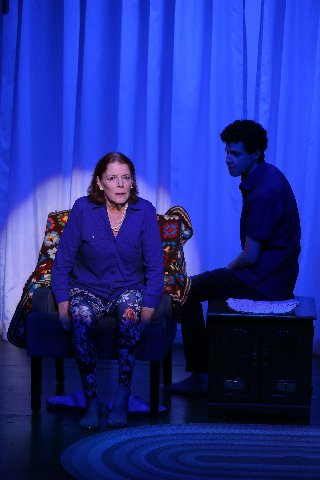 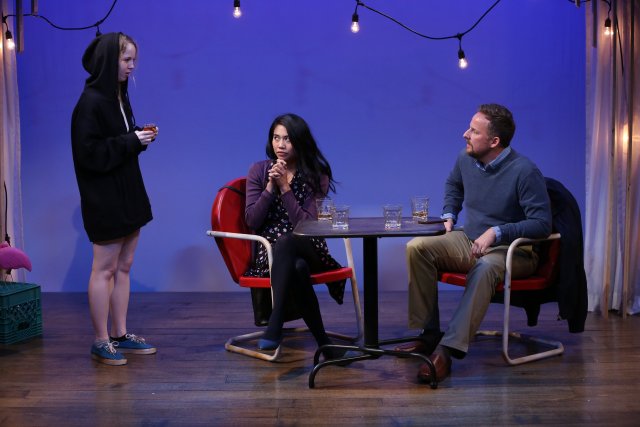 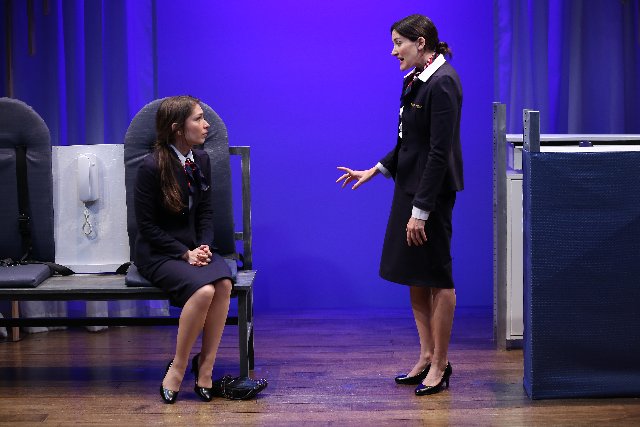 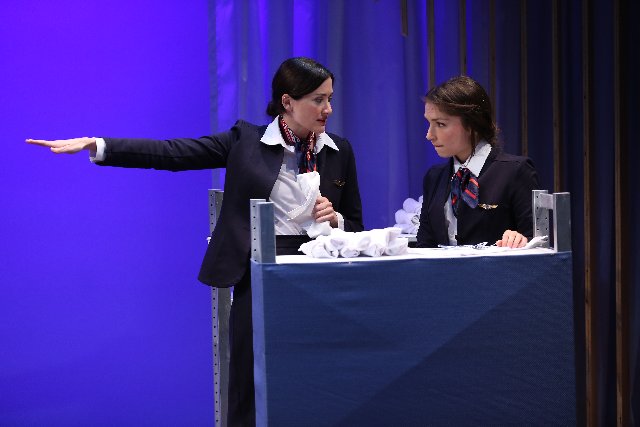 K.K. Glick and Grace Experience figure out what it looks like to fly safe. Brilliant dialogue and characterization. 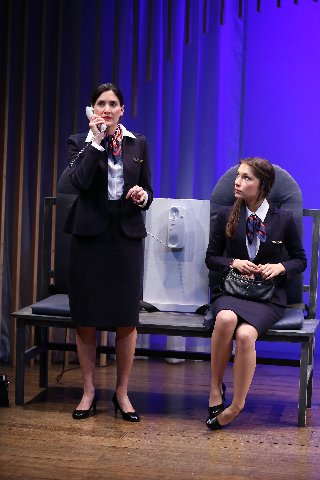 Bringing dignity to the cabin and to life situations, while you also save yourself.

We look at victims in each of three short plays offered this summer at 59 E59 Theaters, Throughline Artists producing. They are all brave in their own way, a bravery that is unexpected. Unusual situations in each play intrigue.

In fact, in the first play presented, The Living Room, we are part of the audience in a future freak house. A series of vignettes are presented by the objects in our view, the last two surviving white people. The curtain goes black between scenes. The couple are depicted naked, having sex and tending an imagined baby, strange things white people did when there were more of them. Robert O'Hara has written about  familiar fat lady shows and gorilla acts now set in a dysfunctional universe. Right now most of the world looks at our country like this freak show the playwright directs.

Kenny's Tavern by Abby Rosebrock brings us to a more usual situation. We are witness to a final tryst in a relationship (we're not sure whether it was consummated or not) between an excellent high school teacher and her married principal. Yawn. Yet we do not.

The teacher (Francesca Fernandez McKensie) is strong. From the start she knows that she has to leave town to get out of the principal’s grips. As principal, Stephen Guarino treds the line between power figure and mouse with a delicate firmness. As he exits to find his next victim, Laura engages a teenage waitress who is grappling with drug addiction and has been kicked out of school. She may well be the next target.

In Grounded by Chris Bohjalian we hit all the surprises and banter of a woman coming to consciousness about a fruitless affair with a much older, married man, which has lasted 8 years. It started when she was fifteen.

Set in the first class cabin of an international flight, two stewardesses deal with take off and fear. Emily (Grace Experience) was told to become a flight crew member by her life coach, who is also her lover and her parents' best friend.

Karen (K.K. Glick) is an older, more experienced flight attendant who has children of her own. She coaches Emily to understanding as she gets her cabin through the flight’s bumps and turbulence.

As Emily’s story unfolds, we see how very brave she is. The life coach was right: she needed to fly. What will happen when she returns to ground may not make him so happy. Her new life coach, her cabin partner, has helped Emily see that she must confront Vladimir (yes!) to go on with her life. Playwright Bohjalian is a masterful creator of dialogue and character. Both actresses delight in his lines, which offer suggestion and reversals over and over again. These torture and delight us.

The shorts at 59E59Theaters are well-mounted, with appropriate settings that enhance the scenes. All of the playwrights can be seen in film theaters, on television and, of course, on the stage. These small yet relevant and entertaining calling cards are welcome.