A Magnficent Performance of Dialogues of the Carmelites 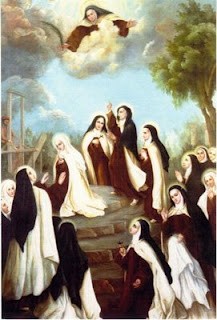 The Dell'Arte Ensemble Opera is tucked into a 13th Street Theater in New York this summer. The company presents the most compelling opera of the 20th century, Poulenc's Dialogues of the Carmelites.  Like much that Dell'Arte mounts, it is a smart choice, easily pared down to dynamic black and white, and designed as sung conversations.  The orchestra was small, but effectively performed as a unit with the singers.

Conducted by Christopher Fecteau, the bells, organ and singing violins all provided musical perfume. The clarinet was particularly beautiful.  The thickening of texture employed by the composer is matched by the emotional compacting of three great talents in creating the story of Blanche de la Force.

Gertrud von le Fort, a convert to Catholicism, found the story of Carmelite nuns during the French Revolution in archival records.  In writing her novel, she created the central character Blanche, modeled on her personal fear that she would not be able to rise to the moral challenges presented by dictators emerging across Europe.  Von le Fort was not made of the stuff of martyrdom.

As sung by Jennifer Moore, Blanche emerges from a trembling-rabbit-like girl into a woman of force as she faces death.  When she chose her name as a postulate she knew the qualifier would be "the agony of Christ."

Bernanos had lived in the shadow of death as he wrote his play.  That fear is God's daughter was abundantly on display. Bernanos wrote, fear "is not beautiful to look at, often ridiculed, at other times cursed.  Yet, make no mistake about it, she is present at every death bed.  She is God's intercessor."

If von le Fort's take was on individual responsibility in the face of Hitler's rise, Bernanos was obsessed with France's collapse to Hitler in 1940.  Poulenc's take was more personal. A man who could not live without company, he was tormented by the absence of a recent lover.  The layering of these themes makes the opera painfully moving.

The French revolutionaries try to strip the nuns of their inner life.  But as Sister Marie says, "No one can deprive us of liberty we no longer have since we have stripped it from ourselves."  Inner life is the deep point of contact with the divine from which all freedom flows and as difficult today as it has always been.

As the old Prioress, Leanne Gonzalez-Singer shone.  In the role the opera's theme is compressed. Gonzalez-Singer moved to the terror of death from her early scene as a compassionate and warm mother to her girls, particularly her newest addition, Blanche.  Gonzalez-Singer reports that a French opera expert told the ensemble to focus on diction and legato.  She was able to accomplish this mission while bringing her voice forward into a perfect emotional pitch. In death, she transfers her grace to Blanche.  Gonzalez-Singer triumphs in the role made famous by Anja Silja with whom she compares favorably.

Performances throughout were dramatic and beautifully sung.  Challenged to provide textural variety in many soprano roles, these singers were able to distinctly characterize their roles and provide great richness.   Also standing out was Blanche's brother sung by Raphael Treiner whose rich voice warmed as he fought for his sister's safety.

Safety is not what the opera is about.  Maria Alu sings Constance, young nun who befriends Blanche.  Her goodness is so integral to her character that she elicits Blanche's envy, in her her lively and lyric voice.  Laura Federici as Mother Marie is constantly in conflict. Federici turns on a dime to display her command and then her anguish. Victoria Crutchfield directed, building dramatic scenes which often ended in freeze frames.

Karen Rich describes the mission of Dell'Arte: to provide a platform for young talent who have completed conservatory studies and are launching their careers, performers "on the brink."   Would the Metropolitan Opera be well served by bringing the entire cast up to cover for their big production of Dialogues in the spring?  You bet.  Here is a small village venue they sang their heart out, not at the brink, but well beyond.