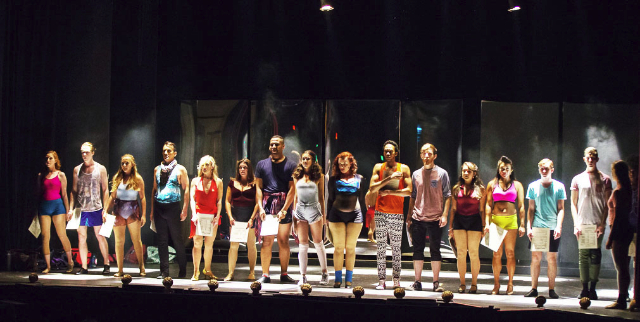 "A Chorus Line" opened the Footlight Players 85th season in Charleston. Historically this Tony Award-winning musical premiered 40 years ago and it has a timeless quality. Singers, dancers and actors audition for roles. Even the most famous celebrities confess of butterflies in their stomachs as their anxiety peaks. This is the essence of the universal appeal of this seminal musical.

It was ambitious of The Footlight Players to have this musical with its large cast to perform on a smallish stage. Yet again "smoke and mirrors techniques made it happen." The 26 performers filled the stage as linear as they could without falling off the stage. The main prop on this bare stage was the lighting because the original staging required a large mirror as the only prop. The cast was dressed in comfortable rehearsal clothes in contrast to how uneasy they felt during the audition.

Zach, the audition master was played magnificently by Cameron Christensen who spent most of his time off-stage yelling out his dance formation commands in a frantic rapid style. He kept the dancers on the move at a hectic pace. When he asked each of the dancers to tell something about themselves, the tone got gentler and he listened with compassion and respect.

The Footlight Players took savvy advantage of the talent available in Charleston. The dancers could sing and the singers could dance. And they all did well in all the acting roles.

Choreographer Megan Pue and Musical director Manny Houston worked well with director Robin Burke's expectation for "A Chorus Line" to feel fresh and relevant. Having all the performers with personal mikes made the sound audible. The audience could understand  the impressive dialogue essential to the heart of the musical. Thanks to the sound engineer Joseph Martin under the Technical Director George Perrotta who also supervised Jesse Oneil, the Lighting Designer. His illuminations took the place of mirrors.

The opening song "I Hope I Get It" set the tone for the hustling bustling dance routines Zach wanted performed for  his Broadway show. There were 26 dancers auditioning for 8 positions.

Some show-stopping production numbers are worth mentioning: Sheila (Jill Williams), Bebe (Jenna Flaherty) and Maggie (Rebecca Weatherby) sang and danced their number which were melodically pleasing with ballet moves to match. Sheila shared her life story filled with personal rejection and Bebe and Maggie contributed their own unpleasant childhood encounters. They all agreed that "everything was beautiful at the ballet" for their life's validation.

"Nothing" was really something as Diana (Tyler Brockington) belted out this song with vim, vigor and vitality. Diana also led the company in "What I Did for Love" which was amazingly passionate.

Mike (Kevin Deese) tapped his way through his solo dance routine as he told his story in "I Can Do That."

Val (Kim Hugli) strutted her newly sculptured body dancing and prancing to "Dance: Ten; Looks: Three." Val reminds us how dancers go to lengths to be noticed in a long line of dancers. It's ironic to want to stand out during the audition process then to be anonymous once you become just another dancer in the chorus line.

Cassie (Taylor Ann Spenser) was the only dancer auditioning that had become a featured dancer on Broadway. However, her fame was short-lived and she was willing to start over again in a chorus line. Her romantic past involvement with Zach made matters complicated. Her beautifully executed dance routine to "The Music and the Mirror" showed that she still has the talent to make it big again. And Zach gave her a second chance to go for it.

The trials and tribulations of all performers trying to make it on Broadway makes achieving their goals bitter sweet.

The finale brought the whole cast to center stage all dressed up in glitz and glitter dancing in unison. The musicians made "A Chorus Line" crisp and alive. Manny Houston on keyboards, Brandon Brooks on Percussion and Arnold Gottlieb on bass deserved their applause.

Bravo to a wonderful and inventive production of "A Chorus Line".