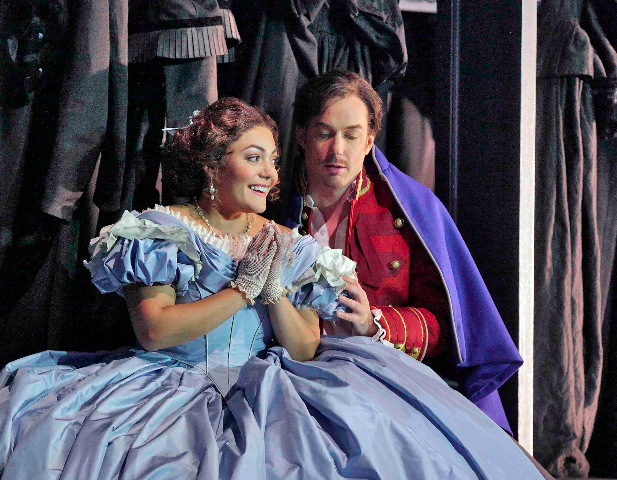 Love is the theme connecting the five productions of the Santa Fe Opera 2016 Festival. Leading off one week of the season was Don Giovanni, where an attempted rape and then a murder jumpstart the opera. The Don is a questionable subject for the discussion of love, as he mows down woman after woman in his quest for the Guinness Book of Records first place position as the world’s best, or most effective, seducer.

Mozart being Mozart, joined by his superb librettist, created a tale in which the tragic consequences of the Don’s talent in seducing women vulnerable to the treacheries of love happen in the first minutes – the murder of one victim’s father. The consequences of this death hang over the antic romps that form the core story.

In Don Giovanni, Zerlina and Masseto are like Papagena and Papageno, a bit of a romantic joke taking place in the lower class. The passion of Donna Elvira, which endures until her vengeance is consummated, is pictured in Santa Fe in the color of her gowns. She appears first in an emerald green gown topped by a forest green cape to express green-with-envy. She takes on blue for true-blue. These touches add to the pleasure of Keri Alkema’s performance in the role. Leah Crocetto gives an earnest and pure touch to Donna Anna, who first appears with breasts bared after the Don’s attempted rape. You have to take her protests seriously when you see that her gown has been dislodged during her battle with the mysterious seducer.

The purest love is between Donna Anna and Don Ottavio. Mozart also gives these singers the most lucid arias and duets. Don Ottavio’s Il mio tesoro is one of many lovely arias in the opera. Yet the overall impact is of buffa, and when played to satisfy, the buffa within the dark tragic drama has the overall impact of laughter which binds the performers and the audience. Laughter is not what we usually associate with love.

Tears are more common, and those we find abundantly in Romeo.  If the Don is about seduction at first grope, Romeo and Juliet is more operatic: love at first glance.

The perfume and lush clouds of harmony of music may give French opera the upper hand in love. In Gounod’s music, we have an altered state of consciousness. Setting eyes on each other, Romeo and Juliet are transported by Eros to another zone.

Stephen Costello fulfills all his early promise as he sings Romeo. French is the language of love, and Costello caresses notes as though they were his love objects. His phrasing is delicate and yet shaped. His voice has become seemingly larger, but he has enhanced its edge, giving it a rich texture. Dynamic control is superb; his pianissimos, magical. Gounod has of course given him the goods, but he takes full advantage of them.

Costello lost his voice during a divorce from Ailyn Perez, Juliet in this production. The two are consummate professionals and pull off the passionate love demanded by the opera. Often they do not face each other, but embrace front to back. When Perez slips in and out of the sheets covering her casket, she has nude moments. Yet, not even the Don’s bath suggests a gratuitous gesture.

The third love proposition in Santa Fe’s love quintet settles on Puccini’s Girl of the Golden West. The composer considered this his best opera, and while it has some very characteristic love arias, it is marked by dissonance, reflecting Puccini’s increased interest in Wagner and Strauss.

Patricia Racette as Minnie charges in wielding her gun like Annie Oakley. Juliet has wielded a knife, but to use against herself.

The gun shots in this opera don’t rival the eighty of Cold Mountain, produced last year in Santa Fe.  The U.S. Marshalls attending the Notorious RBG have to know in advance the exact moment at which each shot is fired. Interesting that three recent Supreme Court Justices, Ginsberg and the deceased Scalia and Rehnquist, all loved the operatic form.

Minnie is mistress of her bar, and mother and sister to the miners in the hills of California at the beginning of the Gold Rush. She has yet to bestow her first kiss. It will go to a bandit ripe for reform. Minnie and her man leave the hanging noose behind and ride off into the sunset. All we and they know is that love will bind them.

Vanessa is a wonderful opera by Samuel Barber. Its central love theme. tied to loss, memory and recapitulation, makes you squirm. This feeling is deliberately created by the composer, Barber, and his librettist, sort-of lifetime partner Gian Carlo Menotti. All the female characters may be one, as the arcs of their stories are similarly shaped.  Someone named Anatol abandoned Vanessa twenty years ago. She may have been pregnant. His son, perhaps their son, returns to captivate Vanessa's niece who may be her daughter or a future version of herself.

The young Anatol is a cad. Unable to get a commitment from the niece, who he has impregnated, he gets the older Vanessa to build a house in Paris and leave behind her castle in some anonymous northern country. They go off, not into the sunset, but into a bleak winter night, shortly after the niece has self-aborted in a ravine. Some love story. It may have mirrored Barber and Menotti's.

In the face of his difficult relationship with the Nazi regime, Richard Strauss composed Capriccio, an opera about his love of opera. The Countess seems like Strauss' wife Pauline, who kept her husband at his desk composing. Strauss’ love for his Jewish daughter-in-law and two Jewish grandchildren prompted him to consort with Goebbels.

Those of us who are passionate lovers of the opera form love music, which Strauss celebrates in Capriccio. He makes the case for its cultural and societal benefits at a very bleak time in history.