Comedy of Errors at Old Globe 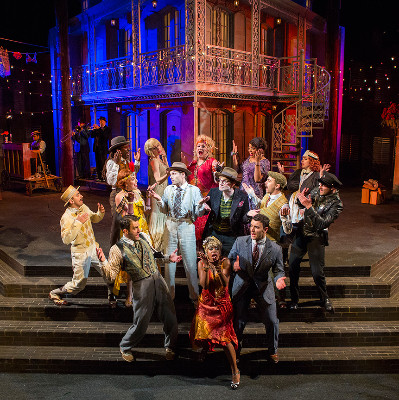 Shakespeare’s classic comedy tale of mistaken identity – long a staple arrow in the quiver of Playwrights ranging from Greeks and Romans to no less a savvy pilferer of stories and plots, than the Bard himself – is playfully, zanily, and brilliantly staged, in the Outdoor Lowell Davies Festival Theatre, by eight time-Tony Award nominee Scott Ellis, along with an inspired cast and ensemble.

The venerable Old Globe Theatre, in Balboa Park, is celebrating its 80 birthday. And what a celebration party they’ve been serving up to their many loyal patrons. The eclectic season of plays selected for the year-long 80th celebration by Artistic Director Barry Edelstein has been a series of winners for San Diego audiences and all true patrons of the

Book-ended with the traditional Old Globe Christmas production of ‘How the Grinch Stole Christmas’ to “Murder for Two”, “The Twenty-Seventh Man”, ‘The White Snake” “Buyer & Cellar”, “Arms and the Man”. “Rich Girl”, “Baskerville: A Sherlock Holmes Mystery” to the Outdoor Summer Shakespeare Festival featuring the plays: “Twelfth Night”, “Kiss Me, Kate” and “The Comedy of Errors”, in repertory, brings to a close another highly successful and entertaining season of quality theatre at the great Tony Award-winning Regional Theatre in Balboa Park.

“The Comedy of Errors” is a crafty selection, by Edelstein, to close out the ‘summer season’ at The Old Globe. Under Director Ellis’ creative staging, the masterful production, has been moved up in time from an Elizabethan setting to the jazz-age, sexy, wide-open, ‘laissez les bon temps rouler’ lifestyle of 1920’s New Orleans (NOLA).

The text, however, with its zany narrative and sharply executed shenanigans, along with Shakespearean accented speeches are still in place, but now there is an insouciance, and a cultural overlay in this production that compliments the NOLA of then as well as today. The comic farce resonates in 2015 just as effectively as did the Abbott and Costello baseball routine of mistaken identity in “Who’s on First” did back in the day.

It’s a given that when a story centers around two pairs of identical twins, in this case, boys; each a mirror image of the other – separated at birth by their parents and sent to live and be raised in different cities, that the possibilities for comedy scenarios are endless; especially when they constantly keep missing one another only to finally meet at the end. It’s a credit to this wonderfully talented cast of actors and dancers that the hilarity of mistaken identity in one of Shakespeare’s greatest comedies is so entertainingly presented with style, wit, imagination, and high-octane energy.

Portraying the very confused sets of twins are gifted actors Glenn Howerton as Antipholus of Ephesus/Antipholus of Syracuse and Tony Award nominee Rory O’Malley as Dromio of Ephesus/Dromio of Syracuse. Megan Dodds as Adriana, and Barrett Doss as Luciana, score as the love interests of the twins. Strong support also comes from Austin Durant as Duke Solinus and as Doctor Pinch, and from Garth Schilling as the Courtesan; each delivering show-stopper moments, along with San Diego favorite Deborah Taylor as Emelia, and Patrick Kerr as Egeon the father of the twin boys and the person responsible for setting all of this entertaining silliness in motion.

The Old Globe Theatre has few equals when it comes to technical disciplines. Director Ellis masterfully orchestrates the gifts that Scenic Designer Alexander Dodge provides in recreating a New Orleans we all have seen and know.

The colorful costumes for the ‘ladies of the night’ and those playing the locals, by designer Linda Cho are picture-perfect in style and period authenticity. And, thanks to a lighting design by Philip S. Rosenberg, we get to see and enjoy the impeccable timing and pacing taking place on-stage.

Ellis even manages to squeeze in a traveling group of street musicians at the proper moments which greatly enhances the on-stage action and the overall production. I was ready for a hearty, delicious-tasting, bowl of ‘gumbo’ following the 90 minute, no-intermission,show.

“The Comedy of Errors” production, now performing in the Lowell Davies Outdoor Festival Theatre is a splendid evening in the theatre that runs through September 20, 2015.