Multivalent Global Cabaret at the Colonial 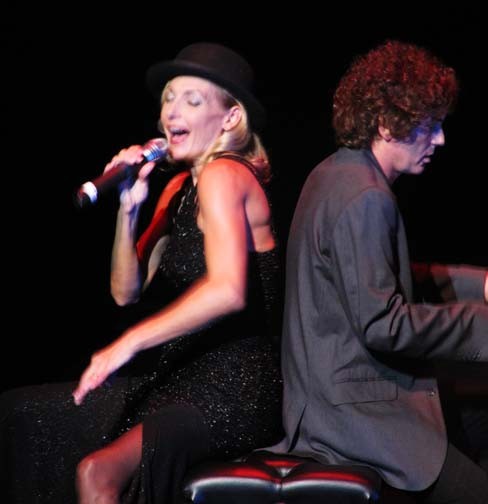 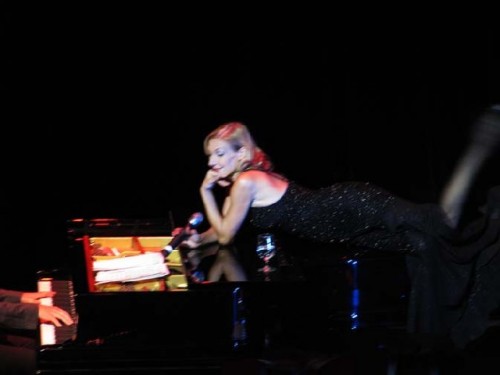 Supine on the Steinway. 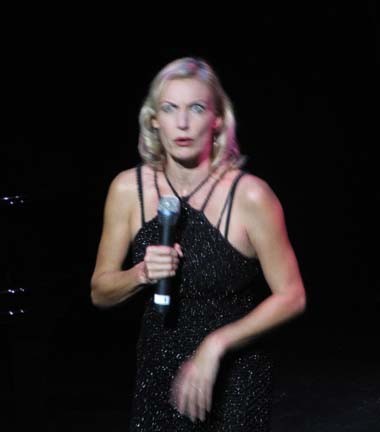 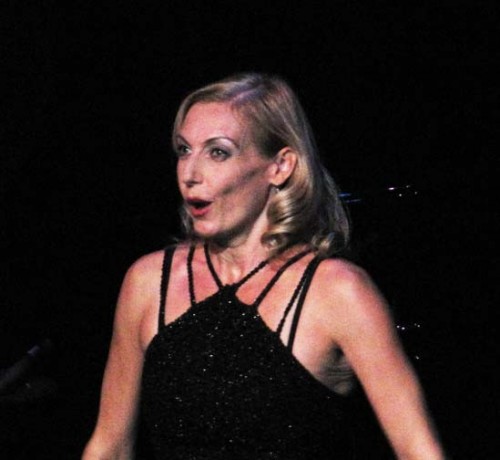 She sang in five languages. 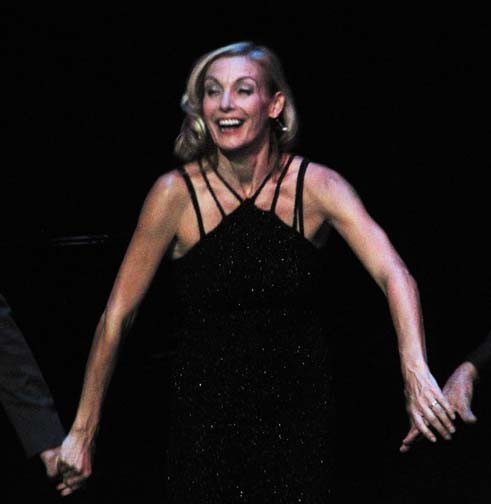 Taking a bow in Pittsfield.

In a swirling blur, twisting, turning and cavorting the international cabaret artist, Ute Lemper, slithered on stage last night. The set started with a song in German which morphed into English became recognizable as “Falling in Love Again.”

With a witty comment about charming, provincial Pittsfield, she intrigued a less than capacity audience for 90 minutes. She returned for another fifteen minutes of encores. There was the sense that we had experienced something very rare and special.

Perhaps too rare for the provinces. Her  recent four shows at Joe’s Pub in New York, where she resides, introducing new material composed to the poetry of the late lamented, total gonzo, drunk, skanky Charles Bukowski, were totally sold out.

While in New York, Berlin, Buenos Aires and around the world they clamor for her intermittent appearances, in Pittsfield, except for the chosen and anointed, most people have never heard of her. Ute who?

Jogging memory we saw her in the London production of Chicago. She won an Olivier Award for her electrifying Velma Kelly. We had front row seats and the sweat of the energetic dancers splashed us like a priest dousing the faithful with holy water during a high mass.

There was indeed that reverential mood as the vintage, impeccably restored Colonial was, at least for one evening, transformed into a temple of art for this exotic, arresting and hypnotic high priestess.

For my German born wife, Astrid, it was a particular end of season treat as the matrix of her multivalent repertoire, sung in English, German, Spanish, French and Yiddish, passes through Berlin. There was much Brecht/ Weill as to be expected as well as tributes to Edith Piaf and Jacques Brel's "Copenhagen."

It was heartwarming to hear such chestnuts as the World War I anthem “Lilli Marleen.” It was the anthem beloved on both sides of the trenches. She dispatched it early in he program. Then later the snarly, sharp, tough original German version of the Brecht/ Weill classic “Moriat Von Mecky Messer.” Even though many in the audience know not a word of German it was obvious that arch villain Mack the Knife was prowling in Pittsfield. She also sang their "Bilbao Song" and "Pirate Jenny."

Most often in reviews the shades of Marlene Dietrich and Lotte Lenya are evoked. Indeed much of her sensibility is rooted in the arts that flourished during the Weimar Republic on the cusp before the devastation of the Third Reich. She evokes the lustmord and grim apache sensibility of the smoke filled beer halls and cabarets of Berlin. As she commented it was a world captured in the mordant paintings of Otto Dix, Oskar Kokoschka (Vienna actually) and George Grosz among others.

The theme of this tour is Last Tango in Paris. She discussed how it was a favorite inspiration for Brecht and Weill. But also a global phenomenon as the musical excursion tracked it back to Argentina and around the world. It was the sense of a vagabond, gypsy culture she conveyed perpetrated and inspired by war, holocaust, economic hardship, and restless exploration. She described living in New York but keeping a suitcase in Berlin.

During the Argentine segment she sang Piazolla's "Yo Soy Maria" "Chiquillin" and "Pajaros Perdidos." During this segment we were treated to the spectacular nuances of the accordian.

There seemed to be no horizon for her global reach and vision. There is always something to visit, see, and taste just out of reach. It made a mockery of stay at home Americans and their lack of command of languages and cultures. Perhaps that explains the disappointing turn out for an evening of song in five languages. But even if you did not understand the lyrics their flavors were conveyed in ever gesture, guttural pronunciation, and frenetic energy.

Lemper was equally expressive and articulate in all of the languages at her command. The German in particular was delivered with a very exaggerated and sharp dialect. Although she grew up in Munster her style evokes Berlin.

Or Buenos Aires, Paris, and even the Belgium of Brel.

Her vocal command was stunning. There were passages that dropped into pure jazz singing with shades of Ella and Sarah. She is adept at the technique of vocalese simulating the sound of a bluesy trumpet and even trombone. She is the master of so many styles and idioms.

There is another aspect as polemical, political raconteur. Yes, there was an edge to the commentary that conflated the Holocaust set to the energy of tango. But her take on the many phases of the history of Berlin, pausing on the rise and fall of The Wall, horrors of the Stasi, grim life under Marxism in East Germany, to the energy today, was delivered with delicious insight, wit, and humor.

Never more so than in the hilarious telling of the saga of her ratty, red boa. It was treated as a relic and artifact passing through many hands. From Margaret Thatcher, who gave it to Helmut Kohl, then on to Condoleezza Rice and Hilary Clinton who cut it up and shared it with thirty other remarkable women around the world.

Accompanying her on this musical odyssey was the prefect instrumentation of grand piano, which at one point she stretched out on, and a truly wonderful Argentine accordion player. Sorry, I missed their names, and couldn’t find them on line.

Waiting for the elevator to the lobby (we had seats in the balcony) a small older woman with striking red hair evoked Lotte Lenya from Three Penny Opera. She was amusing and provoking her women friends by making comments in German and French.

They hadn’t a clue what she was saying but nervously a woman joked “I’m trying to master English.” Indeed. How America.

But at least for this evening “Life is a cabaret my friends.” Sorry Bruce and all you Jersey Boys, it was not “Born in the USA.”