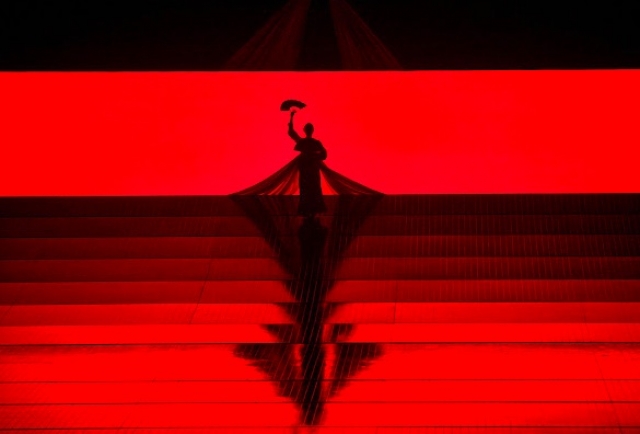 Madama Butterfly This Season at the Met

It's one of the greatest love stories of the operatic canon. It's a sharp commentary on American imperialism and the uncaring treatment of "natives" by white people. It's both. It's brilliant. It's Butterfly.

What is Madama Butterfly?

This is Puccini's sixth opera, the story of a culture clash between West and East, where different ideas about the meaning and sanctity of marriage have deadly consequences for the show's titular heroine.

An American naval lieutenant, B.F. Pinkerton, marries Cio-Cio-San (the titular "Madame Butterfly") against the wishes of her family, in the port city of Nagasaki, Japan. They spend a night of passion together and he departs. Three years later, she has had his child and awaits his return. When he finally arrives, it is with a blonde lady, his "real American bride" to collect the child. Cio-Cio San commits ritual suicide.

Puccini poured his genius into the blossoming, flowing miracle of a score that has made this opera beloved for over a century. And then after Butterfly bombed on opening night, he was forced to revise the work, honing its edge and creating a work that pleases the public ear but also holds to the highest level of artistic integrity.

Roberto Aronica is the feckless Pinkerton for most of the performances. His Butterflies are Hui He (in the fall cast) and Ermonela Jaho in the spring, when the swallows return to Lincoln Center. Maria Zifchak sings all performances in the role of her faithful maid Suzuki.

This handsome staging by director Anthony Minghella announced the start of a new era at the Met. Sliding shoji and colorful costumes are set off by a black background and bright primary colors. Interestingly, the part of Butterfly's child is played by a shadow puppet.

Why should I see it?

This is an evergreen opera that never fails to break the heart and move the listener. Plus it has the gorgeous, soaring aria "Un bel di," a challenge for any soprano.

When does it open?

Where can I get tickets?
Tickets  are available through MetOpera.Org or by calling the box office at (212) 362-6000. You can save service fees by going to the box office in person at the Met itself, located at 30 Lincoln Center Plaza. Hours: Monday to Saturday: 10am-8pm, Sunday: 12pm-6pm.

Is there a Live in HD broadcast planned?

No, but this production has been filmed and is available on DVD.

There are a number of fine Butterfly recordings, but this set is ahead of the pack, thanks to the expert conducting of Sir John Barbiriolli. The British maestro leads an authentic, Italian chorus and orchestra, with excellent results--this is passionate music-making. The young Renata Scotto is at her best as Puccini's heroine. Carlo Bergonzi is a seductive, impressive presence as Pinkerton, and almost makes you feel sympathy toward his feckless character.