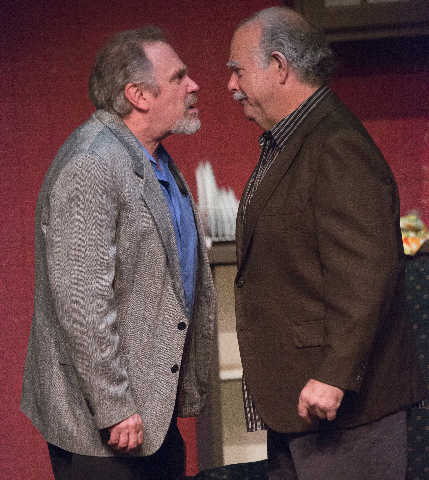 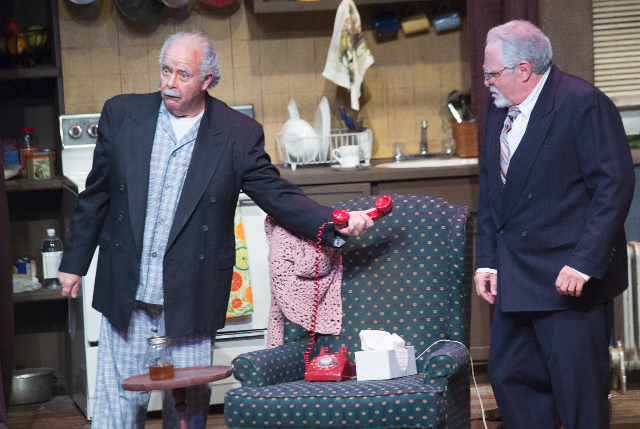 As you hear his one-liners zing from the mouth of one character to the ear of another, a sense of serenity and amusement envelops you. Suddenly, fears of nuclear attacks and terrorist plots escape us like tension from tight shoulders following a refreshing, deep-tissue massage.

A sense of wistfulness takes over as you hearken back to a time when a Broadway season without one of Neil Simon's comedies was rare. It was a time when sure, the world had problems but didn’t seem like such a dangerous place.

These days, a theater season without a play highlighting today’s horrors and uncertainties is rare. Instead of the harmless trajectory of one of Simon’s signature one-liners, we’re more likely to hear in a play about the deadly, precise, long-distance range of one of North Korean dictator Kim Jong-Un’s nuclear weapons.

The only thing taking flight, thank God, at the Broward Stage Door Theater are Simon’s zingers.

Folks, especially from the Baby Boom generation and before, might think (or hum) “Those Were the Days” after hearing those funny lines of dialogue in the 1972 Simon comedy The Sunshine Boys. It is running through Sept. 24 in a production blessed with impressive comic timing. Under Michael Leeds’ spirited and sensitive direction, this production also finds the pathos in Simon’s play.

Who better than Simon to pen a play about vaudeville -- that very American form of variety entertainment, whose heyday lasted from circa the 1800s to 1930s? After all, Simon launched his career writing for television’s “The Phil Silvers Show” and “Sid Caesar’s Your Show of Shows.”  Simon, who often composed from personal experience, writes with authority and humor about the ups and downs (mostly downs) of a fictional former famous vaudevillian duo -- Willie Clark and Al Lewis.

The play begins in the mid-70’s in Willie's apartment. It is designed to look old-fashioned with period detail and showbiz posters by set designer Michael McClain. The apartment also appears well kept, but dingy and deteriorating, mirroring the state of mind and body of the characters.

It is decades after the duo experienced their best performing years. Willie and Al might still bear the title of “The Sunshine Boys,” but they’re well past the sunset of their careers. Lewis has retired. Willie, whose countenance suggests dark clouds more than sunshine, still thinks he’s a performer. However, he can’t even remember the name of the product for a commercial in which he just appeared. The two are hardly on the best terms; the proud, close-minded Willie holds more than one grudge against his former comic partner. So you can imagine what happens when Willie’s nephew, Ben (a sincere, often exasperated and ambitious Ben Sandomir), suggests the two reunite for a television special focusing on the history of comedy.

As Willie, Michael H. Small is big in facial expressions and vocal inflections.

His Willie conveys stubbornness and a strong will without making the character unlikable. Small’s vivid facial expressions convey emotion as strongly as spoken words -- from the furrow that forms between his lowered eyebrows when Willie is suspicious or wary to his eyes that widen in intense conviction.

When Small's Willie speaks, his tone is sharp and words come rapidly. You can’t help but think you're hearing an older Nathan Lane. When Willie conveys disbelief, anger, vulnerability or hostility, Small thickens his voice, sounding like an emotional, sing-songy Walter Matthau.

If Small’s Willie is the funny man of the duo, Peter Librach’s Al Lewis is the straight and more restrained man. He projects a dignified, humble, charming yet confident but never arrogant aura. Librach’s Al only gets intense when Willie gets on his nerves. The duo often stand face to face, even nose to nose, learning forward in an aggressive stance. Both men display impressive comic timing and let the comedy rise organically from their characters by remaining true to them.

The play is funny, in part, because we recognize the characters. These two bickering, forgetful, feisty men might bring to mind your beloved but stubborn grandfather who insists on getting his way. Of course, the source of Simon’s humor also originates from his often-wry one-liners.

Ben: And if you’re waiting for a laugh, you’re not going to get one from me.

Willie: Who could live that long? Get me a job instead of a laugh.

Some parts of the show even play out like a fast-paced vaudeville routine.

Al: Oh yes. The manager from the Belasco.

Willie: That was Sol Bernstein.

Al: Not Sol Bernstein. Sol Burton was the manager from the Belasco.

The Sunshine Boys features light, comedic moments, but also contains dramatic material. It remind us of life’s fragility, how our existence is too short to hold grudges and how second chances and reconciliation are possible.

The play might not be Simon’s best, but it was a harbinger of his ability to craft more meaty material that deftly combined pathos with comedy.