A Feature of Santa Fe Opera 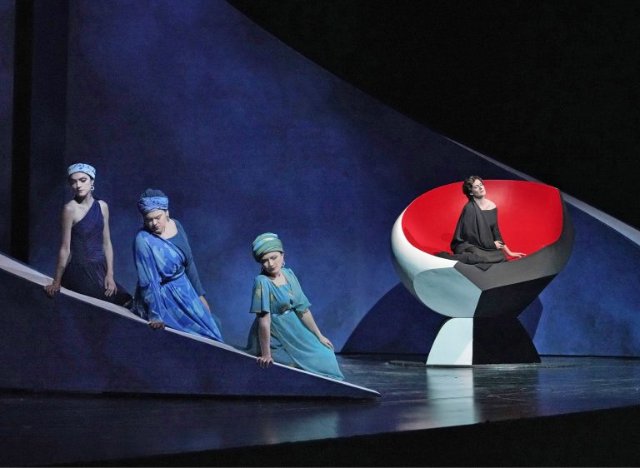 Although we are great variety seekers, we have traveled from the Bay Area to attend the Santa Fe Opera for eight years running. It is the finest summer opera company in the nation. Its largely open 2,100 seat opera house is unique in design, stunning in its beauty, and breathtaking in its setting. The overall ambiance is very special and memorable.

We attend the third week of August because of two special events on the calendar. The largest and oldest Indian Market in the U.S. occurs at that time. While the market itself is only on the ending weekend, a host of interesting and free activities fill the weekday schedule, including films with native peoples’ themes at the New Mexico History Museum; artists’ receptions with wine and snacks at many of the art galleries; and panel discussions at the IAIA Museum of Contemporary Native Arts.

On the two weekends that bookend Indian Market, Santa Fe Opera presents the always stirring and diverse Apprentice Scenes. The backstory to these entertainments is that the company has a stellar apprenticeship program each summer that extends beyond singers to include young set designers, costumers, lighters, and the whole array of behind-the-curtain magicians who enhance opera scores to make them lavish events. Of course, it is the singers who are most in evidence, and to call them apprentices is a bit of misnomer. These are fully formed artists, many of whom are capable of stepping into major performing roles. In fact, the apprentices form the choruses for each of the productions; some of them perform smaller roles in the operas; and some even understudy main roles and may be called to fill in. In fact, in 2014, we saw an apprentice perform the title role in Dr. Sun Yat-Sen and do a commendable job.

In Apprentice Scenes, excerpts from eight different operas are performed by various combinations of artists. They are fully costumed and lit, partially staged, and accompanied by piano. With a ticket price of $15, even for the best orchestra seats if you purchase early enough, we can think of no better value in live entertainment. The performers are fully professional and engaging, and if you don’t care for one piece, wait a few minutes, and another will be along.

For us, three scenes stood out this year, partly driven by the selections themselves, and in one particular case, the riveting performances as well. Our favorite was the “Una Furtiva Lagrima” sequence from Gaetano Donizetti’s L’elisir d’amore. Set in contemporary western idiom, tenor Rafael Moras wears a cowboy hat and boots, and extracts unbelievable emotion and vocal acuity from the aria sung in dirge-like time. Plus, his remarkable comic acting, well supported by soprano Sylvia D’Eramo in both voice and charm, combined to bring the house down.

We also loved the rendition of the extract from Leonard Bernstein’s bright and jazzy Trouble in Tahiti, which deserves more full productions than it seems to get (although we saw a wonderful production by San Francisco’s Opera Parallèle last year.)  Appropriately, the final scene of the evening was the finale from Charles Gounod’s Faust, with the clashing trio of the doomed Marguerite, the foolish Faust, and the scheming Méphistophélès. The music absolutely ascends to the heavens like few others in opera.

Serious opera lovers will enjoy the Apprentice Scenes for their freshness and diversity as well as to experience opera singers on the rise. We’ve seen several and keep going back. And for visitors to Santa Fe who think they don’t like opera, this is an exceptional opportunity to dabble in this glorious art form and maybe find something to like. Further, they will share in its very special vibe, not the stuffy, formal feel of the traditional opera house, but an open, relaxed feel with a touch of cowboy chic.

Incidentally, tailgating and picnicking are encouraged before any opera evening. Bring your own or order gourmet boxes in advance. There are also gourmet buffets with speakers before each performance that are pretty spectacular, expensive, and sell out early. Alternatively, free talks about the evenings’ performances are given two hours and one hour before curtain.