Wagnerism: The Superb Story of Culture Over 150 Years 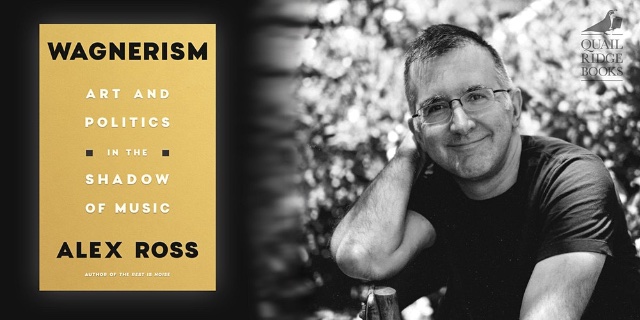 Alex Ross has written a Wagnerian book about the impact of Richard Wagner on the culture and politics of his times leading right up to our own.

In a prelude, Ross describes Wagner’s Death in Venice, hinting at his influence on Thomas Mann. The room in which Wagner died was filled with silks and laces. Wagner wore a pink robe. While it is highly unlikely that Wagner was gay, he was not fearful of expressing what have come to be regarded as homosexual tastes. The adoption of his music by gay men is detailed in the book. Proust relished the composer.

The artists who were deeply affected by Wagner’s music were affected each in their own way. Yet all of them would probably join with Wagner as he played the Rhine maidens’ lament on the piano the day before his death.  “I am fond of them, these subordinate beings of the deep, with their yearning.”

Yearning is what the music of Wagner is all about.  Hearing it you are swept in. The longing skip from B flat to G with a decoration in between characterizes "Rienzi’s prayer", an early composition by the Meister.  "Liebestod" from Tristsan and Isolde, full of insatiable desire, is an enduring part of popular culture.

Ross did not fall for Wagner immediately. As a boy he preferred composers from Bach to Brahms. He studied the piano and oboe to learn how to play them, not to perform for us from a stage. His chosen stage was composition. And surely as a writer his compositions are sublime. He is inarguably the finest writer on music today, with the exception perhaps of the novelist Richard Powers. Both men draw us into the world of music with reference to both the world’s impact on music, and, reciprocally, music’s impact on that world.

Wagner comes to our generation through the filter of Adolf Hitler and Naziism.  Ross discusses the dangers  of merging popular culture and politics.  Ave Maria will probably survive the fireworks that concluded the recent Republican National Convention, but this current administration is an example of the disastrous impact of this merger. The Third Reich was another.

Ross uses this example to show us how the attraction of a tyrant to culture can start innocently and fester into a gangrenous spread. Hitler, an aspiring artist himself, loved Wagner’s music. Everyone did. Ross points out that even if you didn’t listen to Wagner's music, you knew it was there.

Hitler collected Wagner's scores and often attended concerts. He glorified Bayreuth. There is no doubt that Hitler truly appreciated the music. He appreciated music beyond Wagner. Composer Anton Bruckner was dragged to stand with Hitler when Bruckner's bust was unveiled at Walhalla.

The metastasis into a political movement is not the fault of the composer. While Ross draws a picture of Wagner, warts and all, the portrait is of a huge man who was all too human.

Wagner was enormous.  Ross takes a stab at summing him up. “…the Sorcerer of Bayreuth, the creator of the Ring, Tristan and Isolde and Parsifal, the man who Fredrich Nietzsche described as 'a volcanic eruption of the total undivided artistic capacity of nature itself,' whom Thomas Mann called ‘probably the greatest talent in the history of art.’”

Ross’s parents were both geologists.  They took him to chamber music concerts, but not to opera. He was drawn to music from the start, but came to write about it from a rich background in literature and fine and pop art. Marcel Proust is fond of describing experience in geologic terms, discussing the layers through which we dig to find origins and meaning. Perhaps Ross inherited his taste for digging from his parents.

What he yields in Wagnerism is a textural layer in much of the great art of the past 150 years. He includes in this art the movie making of Francis Ford Coppola and Terrence Malick; the paintings of Anselm Keifer and Wasilly Kandinsky.

The Werner Herzog film The Lessons of Darkness has hours of footage of gorgeous oil fields of Kuwait burning in the first Iraqi war. Gotterdammerung is its track. I stood transfixed by the music and images when it played at the New Museum in Manhattan.

Ross agrees that the Park Avenue Armory, with its productions in the Drill Room, offers a space that feels limitless in which to mount great art. The Armory produced a live version of Visconti's The Damned, which Ross discusses in movie form.

A surprisingly soft portrait of Wagner by Renoir is attractive, but Ross points out that it was done a year before Wagner’s death. The composer did not appreciate the Renoir. He preferred the craggy, tough images of him captured by others.

You may well read this rich book in one fell swoop. I could not put it down. I was meeting old friends, in my case George Eliot, Marcel Proust and Thomas Mann. I encountered them anew in Ross’s take as I learned of their passion for Wagner and how this worked out in their novels. You might sample the book savoring personal favorites. Baudelaire is Ross's.

Great writers weave motives throughout their work while still holding a piece together in a grand scheme. Wagner showed how to accomplish (or aim for) this impossible goal at the height of his art. Others still attempt Everest in the spirit of the Meister.

Wagner’s influence at its best goes on and on for our yearning pleasure. Ross satisfies some of the yearning, but leaves its tortured beauty intact, as it should be.

Publication date for Wagnerism, a Farrar Straus and Giroux book, is September 15, 2020.

This is the first of four articles.