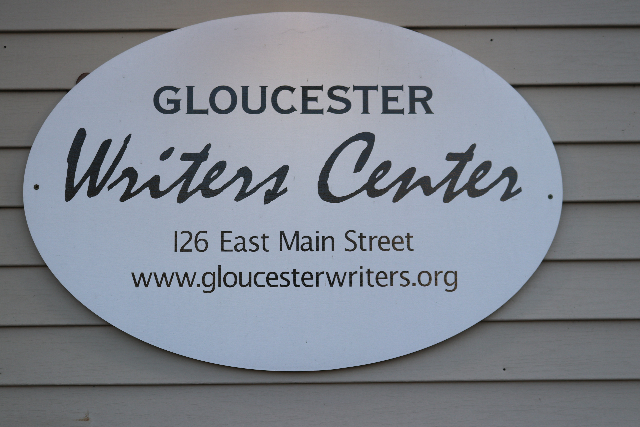 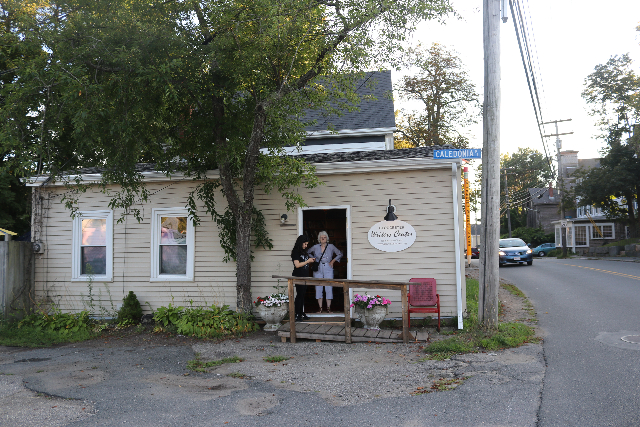 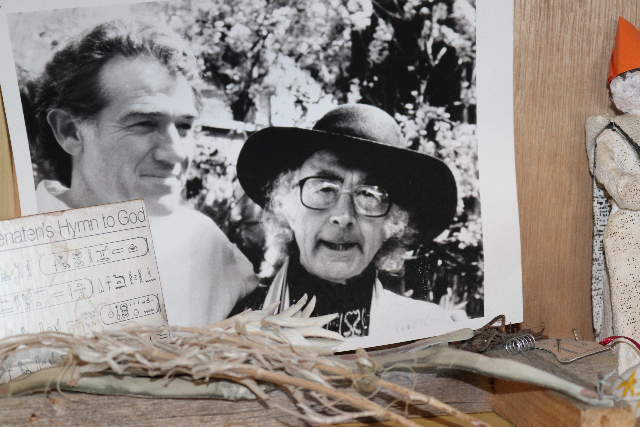 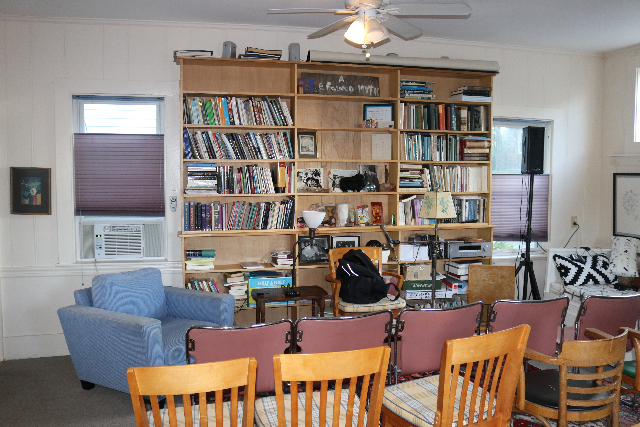 Vicent's former frame shop set up for the reading. 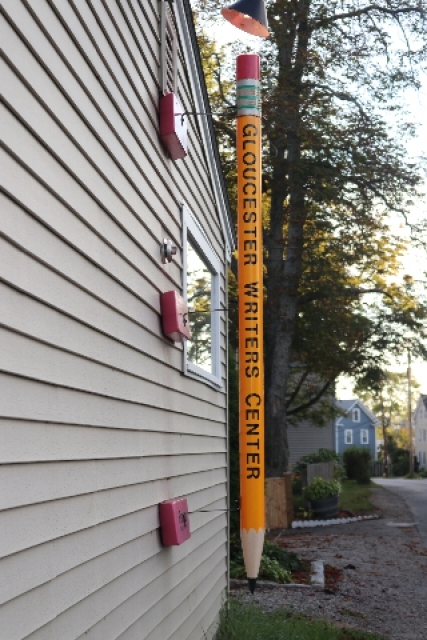 The pencil as icon. 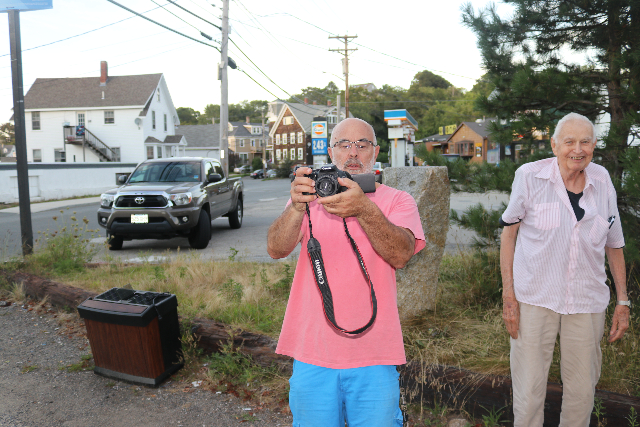 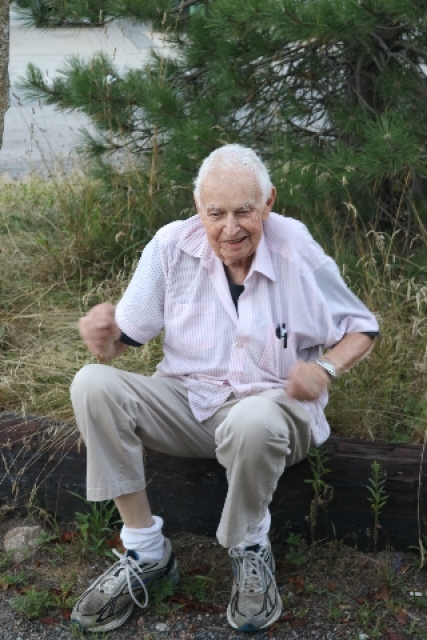 Gerritt is a Gloucester poet, 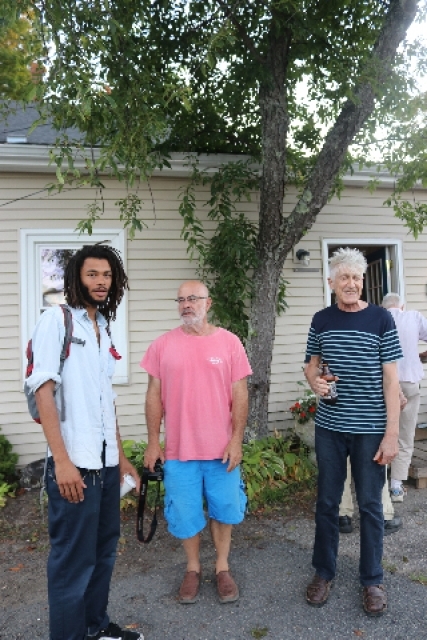 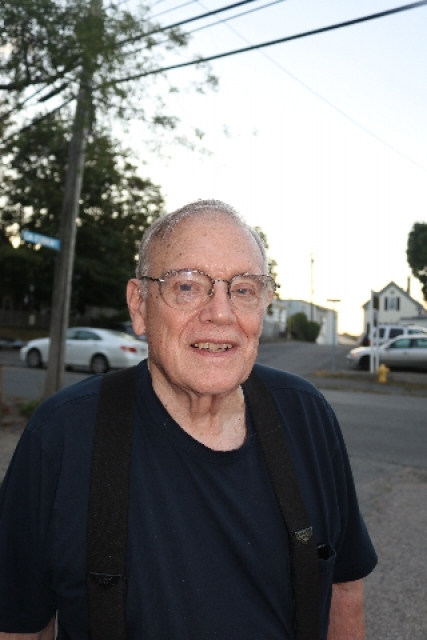 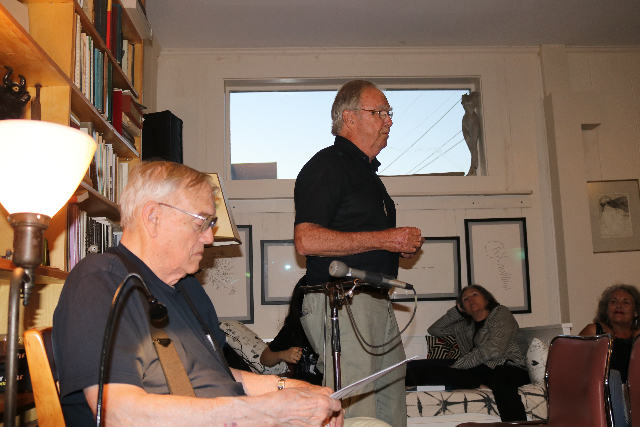 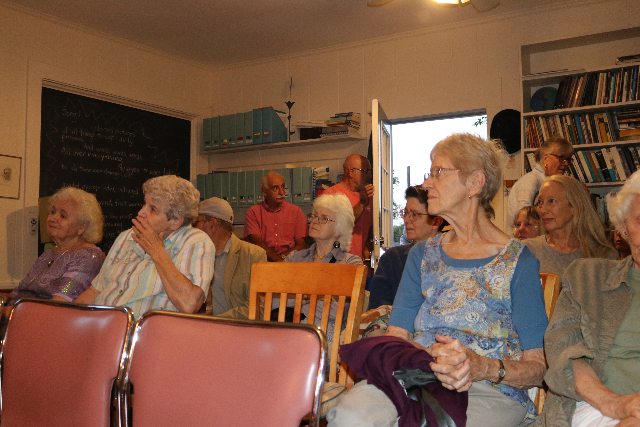 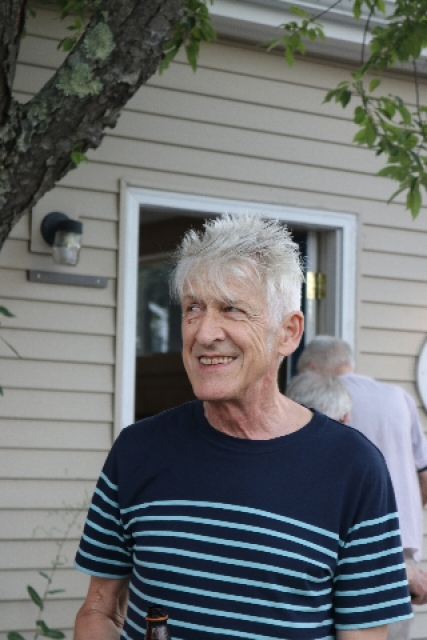 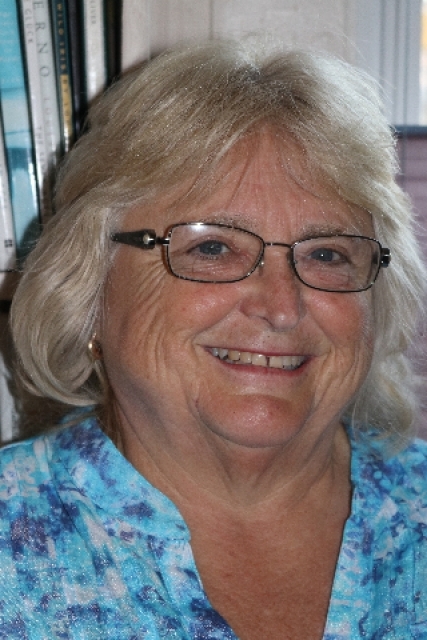 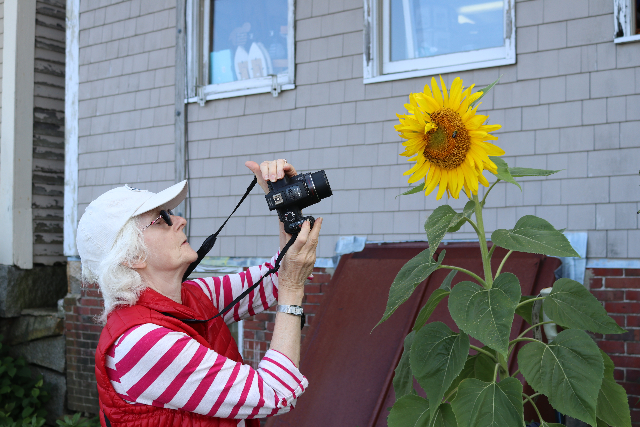 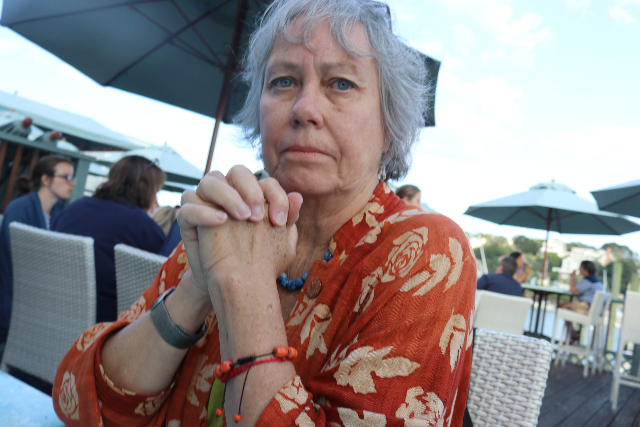 Sister Pip wrote the introduction to the book. 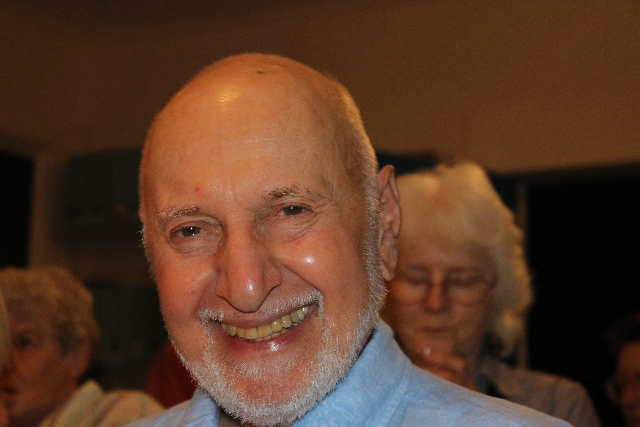 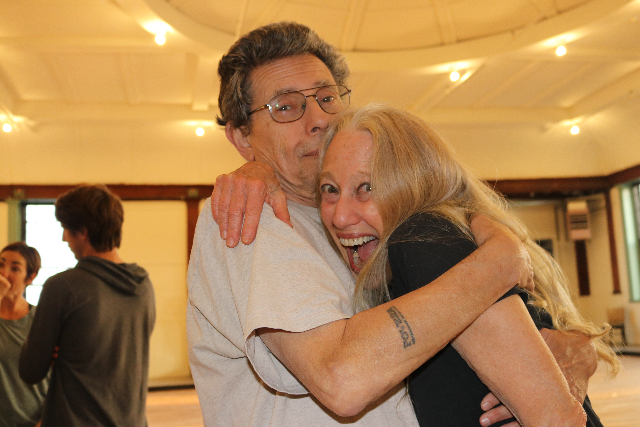 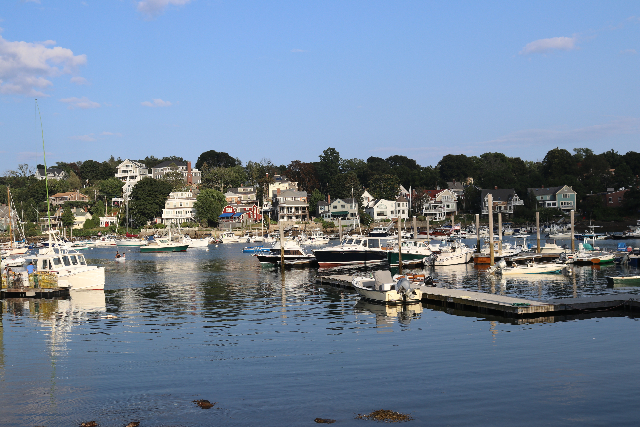 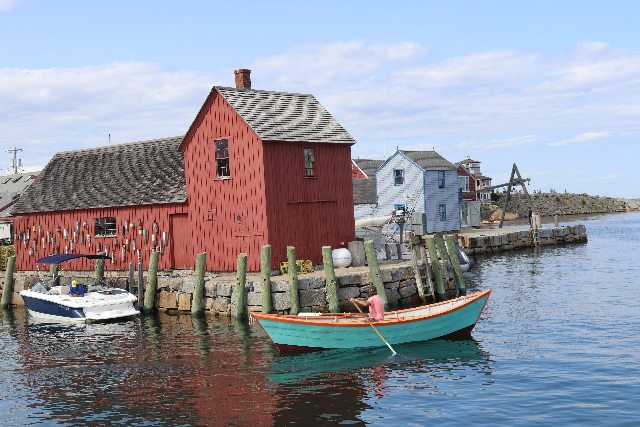 A dory rows past Motif Number One. 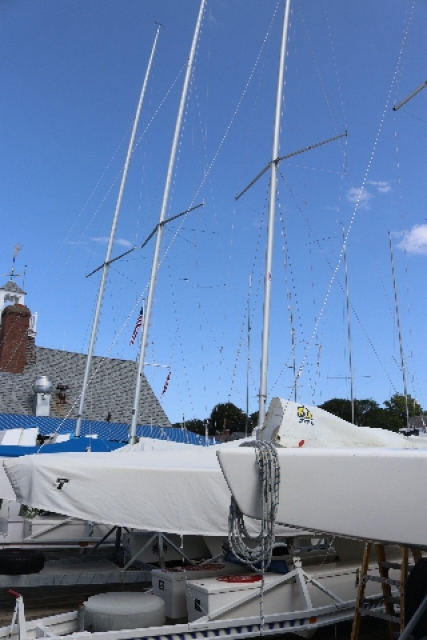 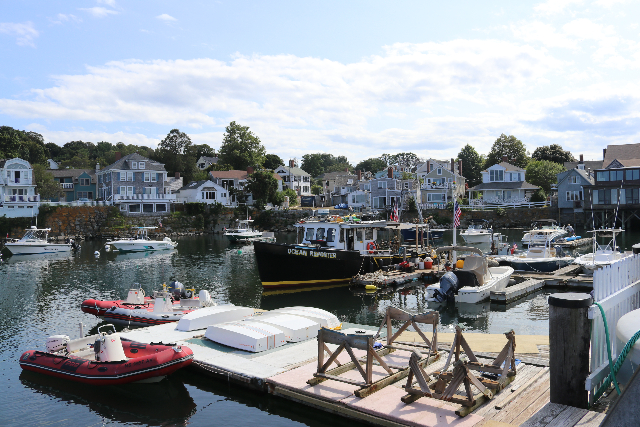 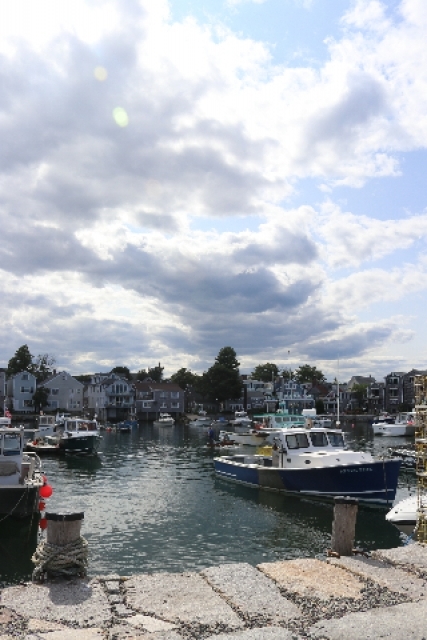 A cloudy summer day in Rockport. 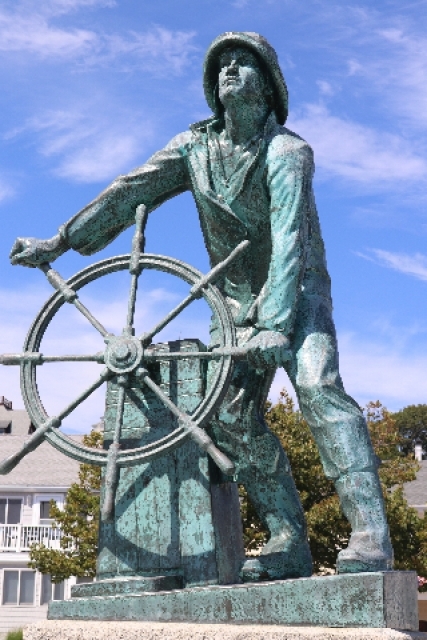 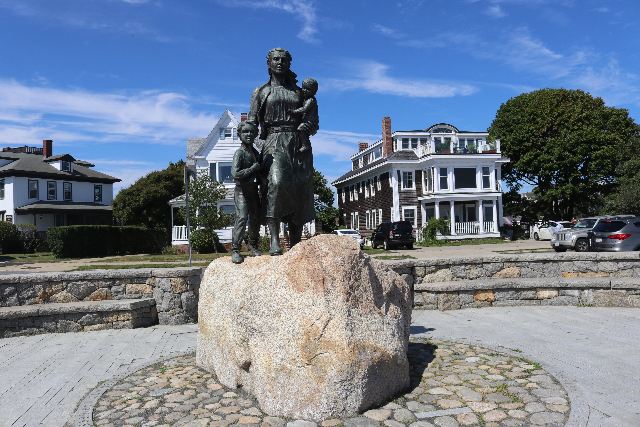 The more recent memorial to the wives of fishermen. 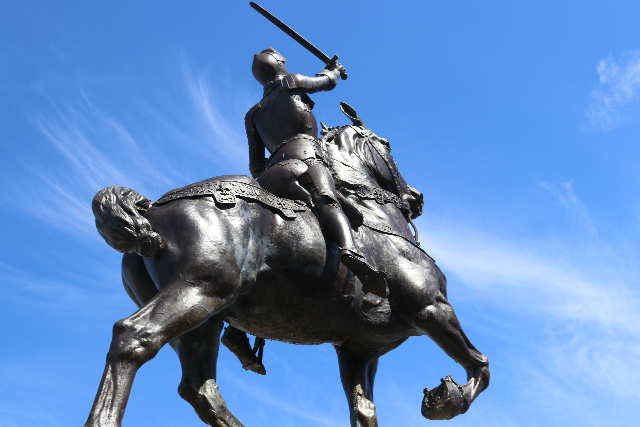 The notable statue of Jeanne d'Arc.

Nowadays hipsters are few and far between.

Sometimes it seems like just me, Henry Ferrini, and my bop consigliere, Robert Henriquez.

Introducing my reading and launch of Gloucester Poems: Nugents of Rockport I was floored when Henry read two of my earlier poems about jazz giants, Miles Davis, and Ornette Coleman.

He paused a bit self consciously when uttering a Miles curse, sheeeetttt man, which I amusingly echoed.

Later he said “I respect your Gloucester stuff but the jazz poems really nail it for me.”

When we get together Sandy’s Jazz Revival in Beverly often pops up. I worked for Sandy Berman doing PR and bar tending on busy nights. It was between gigs before I went back to grad school. I advised him on bookings and turned him on to Chicago blues.

During her stint at the club singer Anita O’Day turned me into her personal gopher. Every night she hit me up for a stick before opening the set with Antonio Carlos Jobim’s “Wave.” I spent an afternoon while she rehearsed a pickup band of local cats.

She kept telling them to lay back saying “You follow me I don’t follow you.” Finally Sandy relented and allowed her to fly in drummer and former husband Joe Poole. That made all the difference as at least the combo got the beat right.

On other occasions I drove Woody Herman and singer Mark Murphy back to town. Or hung out in the Green Room with Dexter Gordon. A running gag was that he couldn’t remember having lunch with me in Copenhagen. I paid.

Who can forget hanging in after hours knocking down shots with Buddy Guy and Junior Wells in from the Windy City.

It was solid and comfy to be back in that one room shack, the former frame shop of  Vincent Ferrini, now home to Gloucester Writers Center.

Last summer Astrid and I spent a week as guests and resident artists. It was an amazing experience and I read some of the poems created there. They were part of a year long project that resulted in the recent book.

The GWC is a cozy place but also wicked intimidating. The room is lined with book shelves groaning under the weight of poetry, anthologies, and books about Cape Ann.

The shades of literary and historical giants  loom over one in that room. Also looking out at the capacity audience there were so many renowned artists, writers and poets. Then there is the weighty presence of monumental Charles Olson who is the base line for anyone who dares to wax poetic about Gloucester.

Cape Ann is a daunting subject and with his notion of Polis the epic poem, Maximus, by Olson laid out its broad reach from indigenous people, early settlers, through the multi ethnic toilers of the sea and quarry men of Rockport. My Irish ancestors, the Nugents of Rockport, were unique in scratching a living from the glacial soil of Dogtown Common.

The Irish didn’t fit in with the mix and in the interview that forms the spine of the new book Mom told me that her mother recalled when they burned down the Catholic church in Rockport.

With a laugh, a couple of days later in Annisquam, poet Geoffrey Movius, commented that it was likely the Lutheran Swedes and anti Papists who were behind the deed. Another unsolved crime is the identity of criminals who torched the Nugent homestead Beaver Dam Farm after the lease ran out in the 1920s. By then my great grandmother, Mary Nugent, gave up that hard life and moved to an apartment near Our Lady of Good Voyage.

Passing by my sister Pip pointed to the house. I commented that it is likely that she walked to mass each day. Not really she said  “That’s a Portuguese church and she wouldn't be welcome there.”

There are many Gloucesters which was the theme of one of the poems I read. We summered in the Yankee enclave and cul de sac Annisquam. It is indeed a private and magical place where we spent the week in an inn next to rocky Cambridge Beach. We managed to swim a couple of times at high tide but it was bone crunching  cold.

Growing up in social and political isolation there is much yet to be discovered about Gloucester. It is a rich enough subject for many artists and writers to stake out their claim on its amazing diversity. The hard work is getting down under the surface and deep into the heart and soul of its daunting culture and traditions.

Much of that falls on the deaf ears of the mega rich now ensconced in upscale condos and mansions. Their Gloucester, driving natives out of their homes and shores, is not the one I know and remember. It’s not the salt water and DNA running through my ancestral veins.

Or even that of T.S. Eliot, born in St. Louis, who as a youth summered on Eastern Point. That residence has been bought, renovated, and recently transformed with a program for five to six week poetry residences. That now builds upon and extends the reach of Gloucester as a matrix for advanced contemporary literature.

Facing this challenge it takes ever more forbearance and street-cred to be considered a Gloucester writer. Now one has not just Olson but Eliot, a reclaimed citizen, to contend with. Even though Eliot proved to be a Royalist and Tory abandoning vulgate America for the better accents and feng shui of all things British. A graduate of Milton Academy and Harvard he was so old school tie that Virginia Wolfe quipped that he came to tea wearing a four piece suit.

Reading from prepared comments and poems Movius stated that he is not a Gloucester poet and it is not  a part of his DNA. His family resided in Annisquam starting in the 1940s and we grew up together in the Junior Program of the AYC. He asserts not remembering much about that. Some years ago he and Barbara bought a home looking down one end of Lobster Cove. They winter in Cambridge.

He read from a collection  Transit as well as some compelling new works that address the all too familiar slings and arrows of outrageous fortune. Some of these are in the hands of publisher Bill Corbett now in Brooklyn and retired from Emerson College. We were colleagues at Art New England and other publications.

I was so struck by some of the new works which Geoffrey delivered with such rich and measured nuance that I asked if he might read them again just for the four of us. They made an even greater impact the second time round. I knew what to expect and the words sunk in deeply. I look forward to having them published and readily accessible.

It is so hard to leave Gloucester. Just a week, late spring and summer, is never enough.

But there are threads and reminders of new and old friends. Gail McCarthy of Gloucester Daily Times has been so generous to write about me on two occasions. The hospitality of Henry has been treasured and immense. With each visit our circle of artists and writers widens and deepens.

Henry, a documentary filmmaker, is hard at work on a project about Lester Young the sweet and sad tenor sax player who lived hard and died too young. No pun intended. He called Billie Holiday “Lady Day” and she dubbed him “Prez.” At some point there was a falling out and then a stunning and poignant reunion captured on film.

As Henry explained to me during an extensive interview last year buying the rights to music and those clips is the major expense of crafting a documentary. He has also traveled to Paris, where Lester spent his last days. He died in NY shortly after an excruciatingly painful flight from Paris. The film will contain interviews with many performers from Harry Belafonte to Sonny Rollins.

In creating documentaries of long dead artists there is always that sense of a race against time. There is urgency to preserving the oral history.

That is something I can identify with my own family and Gloucester project.