Nightmares and Nightcaps: The Stories of John Collier 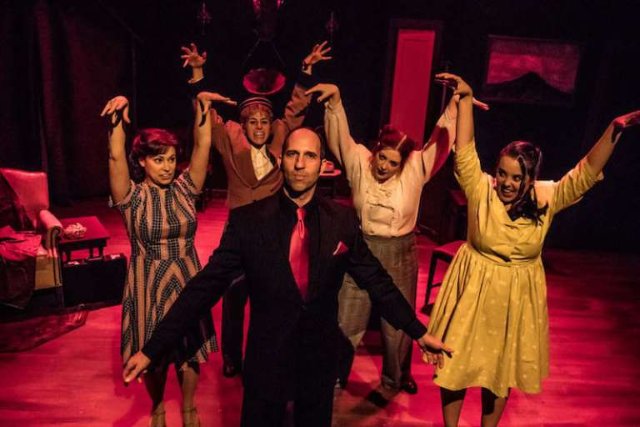 I read a lot of short stories, of varied styles and themes. I like the stories of George Saunders, Shirley Jackson, Philip K. Dick and Hilary Mantel, among others. But I have never read stories by John Collier. I’m correcting that gap right now because Black Button Eyes Productions’ world premiere of Nightmares and Nightcaps: The Stories of John Collier is a strange and spooky delight.

Ed Rutherford of the Black Button Eyes ensemble adapted Collier’s stories and directs the production, which slips smoothly from story to story. The 80-minute show is briskly choreographed (by Derek Van Barham), often hilarious, and creepy-crawly scary, both aurally and visually. Rutherford, setting the scene in the 1930s, effectively dramatizes the stories of Collier, a British expat whose many stories were published in the New Yorker starting in the 1930s.

In a gentleman’s shabby sitting room, The Dweller (a suave-ish Kevin Webb) drowses in pajamas and robe. (The script describes him as “seedy but with a bit of Vincent Price to him.”) One of the Collier stories frames The Dweller’s actions, as he watches and occasionally participates in the six stories that make up the play. (I’ll list them at the end, in case you want to read Collier’s original stories.)

Alice and Irwin (she is played by Maiko Terazawa and he by Joshua Servantez) are a young married couple, happily and giddily in love. But one day a near-accident makes them consider buying insurance, and, well, it doesn’t end well. However, at their finale, they dance a sprightly trot to “Ain’t We Got Fun?”

Mr. and Mrs. Beasley (Shane Roberie and Caitlin Jackson) are middle-aged and not so much in love. When he receives a large inheritance, he wants a life of glamorous travel, even though she’d much rather buy that house in Jacksonville. They set out on travel and meet strange and wonderful people and creatures. But one morning, Mrs. Beasley gets too close to the water….

The longest story is about a Hollywood producer with devilish connections. Writer Charlie Rhythym (Servantez) wants to hit it big and the nefarious Scratch (Lee Wichman) hires him to write screenplays that can be produced cheaply. Scratch promises stardom to a lovely young ingénue (Kat Evans). Charlie’s contract specifies that it will be renewed “every two months for all eternity.” Will he find a way out?

The nine actors, who double and triple as characters, have all mastered accent variations and quick costume changes, with the help of the stage crew. Their acting is stylized and sometimes silly, but it all fits together. The cast also includes puppets (one very scary), and people as creatures. (Kat Evans is a beautiful Bird of Paradise. Ellen DeSitter is Armadillo and also plays a small boy and a character named Squirrel.) Jeremiah Barr, set designer and technical director, gets credit for the puppet designs. Costumes are by Beth Laske-Miller. Robert Hornbostel is sound designer, which includes period music as well as the monster-y sound effects.

The stories of John Collier are often anthologized in fantasy collections, although the few I have read seem really unclassifiable. They are witty and sardonic and usually have surprise endings. He also wrote prolifically for film and TV. His screenplays include I Am a Camera and The African Queen; some of his stories were adapted for the TV series, “Alfred Hitchcock Presents.”

The Dweller’s framing story is “Are You Too Late, or Was I Too Early?” The other Collier stories adapted for the play are:

Nightmares and Nightcaps: The Stories of John Collier by Black Button Eyes Productions continues at the Athenaeum, 2936 N. Southport Ave., through September 15. Performances are Thursday-Sunday. Buy tickets for $30 ($15 for students) online or call 773-935-6875.