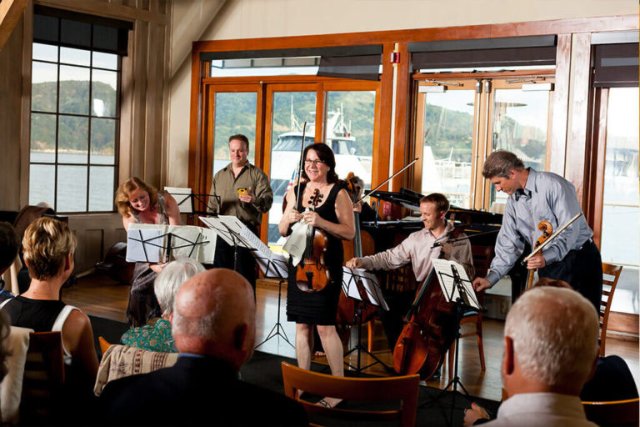 In our first interview with Ruth Ellen Kahn we discussed the theme of integrating chamber music with food and wine appreciation, as well as the overall festival benefits to guests and performers. We continue by probing for further details.

Vic & Karin – Nice to talk with you again, Ruth. You’ve given the broad brush strokes of the upcoming festival, including the thematic tie-in with food and wine. Can you tell us more about the festival artists and the music program?

Ruth – We are so pleased that Bay Area music lovers will be able to experience renowned artists coming from afar. We will showcase legendary Stephanie Chase from New York. She has been described as “one of the violin greats of our era.” The fact that she has soloed with over 170 top orchestras around the world speaks for itself. Philadelphia-based cellist, Professor Jeffrey Solow, a prolific recorder who has two Grammy nominations will join us. He has soloed with the Los Angeles Philharmonic, the Japan Symphony, and many others. And the final visiting instrumentalists are the Giacometti Trio from Lugano, Switzerland, comprised of colleagues who are soloists in Orchestra della Svizzera Italiana. Returning to Musica Marin to sing baritone in vocal pieces is the Italian-German opera singer we know and love, Marco Vassalli.

Vic & Karin – What about local artists? and don’t be shy!

Ruth – Krista Strader, a highly in demand Bay Area harpist, will perform at food and wine events, as will Simple Harmonic Motion, a four-part vocal ensemble that sings a mix of light genres. And I am excited to perform with my colleagues from Europe and throughout the US.

Vic & Karin – Tell us a little more about the program and what music the artists will be playing.

Ruth – For general attendance, we will have four ticketed events. On Friday evening, we will open with festival musicians performing quintet masterpieces from Mozart (the B-flat major, K. 174) and Mendelssohn (No. 2 in B-flat major) followed by a champagne, wine, and dessert reception.

Vic & Karin – Then Saturday is a big day with two events. Tell us about the Giacometti Trio who perform Mozart’s Divertimento and Sibelius’s G-minor trios in the afternoon.

Ruth – They bring well-honed Swiss precision to the party. Violinist Hans Liviabella plays a Stradivarius purchased for him by Orchestra della Svizzera Italiana, and he has performed with the prestigious Chamber Orchestra of Europe. Violist Ivan Vuk?evi? is professor at the Menuhin International Music Academy and has recorded and been broadcast throughout the world. Also a professor at the prestigious Menuhin Academy, cellist Pablo de Navarán has performed at the most important music festivals in Europe including Gstaad, Salzburg, Radio-France, and the Schubert.

Vic & Karin – So they will be performing as a unit and with other guest artists as the classical equivalent of a rock music supergroup?

Ruth – Yes. Saturday evening is the wonderful Chef and Vintner Reception and Festival Concert. It’s the only concert with vocal pieces, and the Trio will play instrumental roles in those. But let’s wait and have Musica Marin’s Composer-in-Residence, Clint Borzoni tell us about that later.

Vic & Karin – And on the closing Sunday you have the Festival Concert Finale and Festival Party.

Ruth – We’re saving some of the best for last. At a gorgeous nine-acre Tiburon estate, our final concert will culminate with Mendelssohn’s glorious and virtuosic String Octet in E-flat major. There’s your supergroup! Following, chef Randy Gardner will prepare appetizers paired with fine wines for the Festival Party.

Vic & Karin – In addition to the public events, you will have Musica Marin Festival Founding Members events. What is that all about?

Ruth – Founding Members are donors who we honor with special events and privileges. We are limiting the number of these patrons, but there are a few spots left for anyone interested in supporting important musical culture in Marin. We will offer a yacht cruise with a private concert by our celebrated baritone Marco Vassalli and a pre-concert dinner created by distinguished guest chefs on Friday. On Sunday we will enjoy a garden luncheon on the Tiburon estate where Jeffrey Solow will discuss Johann Sebastian Bach and perform Bach suites for the solo cello.

Ruth – Here is Clint Borzoni. He is a composer of over 70 classical works including operas, song cycles, and chamber music, and has been our Composer-in-Residence for a couple of years. He can talk about the concert involving his composition.

Two of my songs for Baritone and String Quartet will be performed. They were written for Marco Vassalli’s lyric baritone voice, and we’re excited that he will return to Musica Marin to sing them. I composed them to the poetry of Nobel Prize winner Hermann Hesse and Hilde Domin, two of Germany’s most celebrated authors. Since the verses are in German, I actually had to study the language to get a better feel how to score them.

Vic and Karin – So, Clint, knowing that the festival also celebrates food and wine, do you have any recommended pairings for Culinary Director Mark Furr?

Clint – I don’t know what he has in mind, but I’d go for bratwurst and a light sparkling wine. The combination is a little counterintuitive, but the bratwurst celebrates the German origin of the songs and together with the wine, they offer counterpoint and harmony, as does the music.

Ruth – Wow! The food and wine would also fit with the other pieces in the session as well, but I think Chef Mark Furr may have something a little more elegant in mind to satisfy the palate.

What about the other musical pieces?

Clint – Samuel Barber’s “Dover Beach” is also written for baritone and string quartet, but its deep intensity contrasts with my music’s quickness and fireworks. I actually had it in mind as a possible companion piece when I wrote my songs. Finally, Brahms’s beautiful Sextet in G major, which I know is one of your very favorite works, will complete the bill.

Ruth – But don’t forget, the event will start with Simple Harmonic Motion performing works from pop to barbershop in the courtyard, followed by wine and food from award winning chefs, accompanied by renowned harpist Krista Strader. Plus, you’re slotted in to discuss your work.

While we’re at it, did you want to share your future plans?

Clint – Well, I’ve been commissioned to write a pagan mass, which should be a little different. And, as you know, I am hopeful that we will be performing my chamber opera When Adonis Calls as part of Musica Marin’s offerings next summer. We are still looking for funding, and if we succeed, this will be the West Coast premiere.