To Kill a Mockingbird at Weston Playhouse 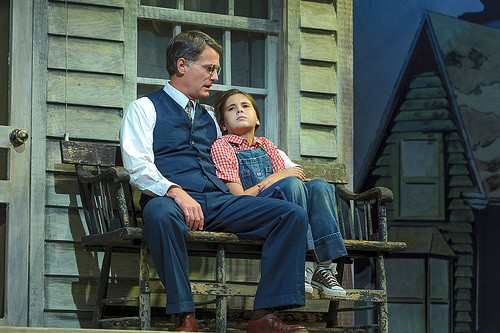 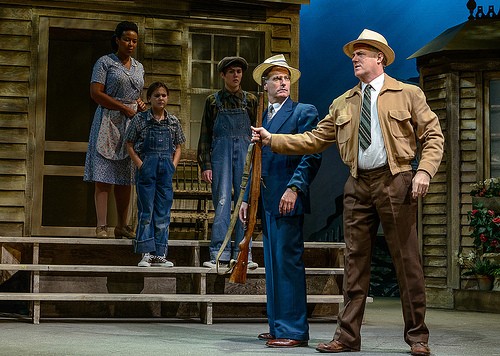 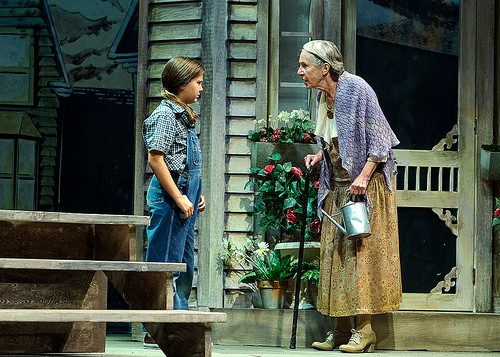 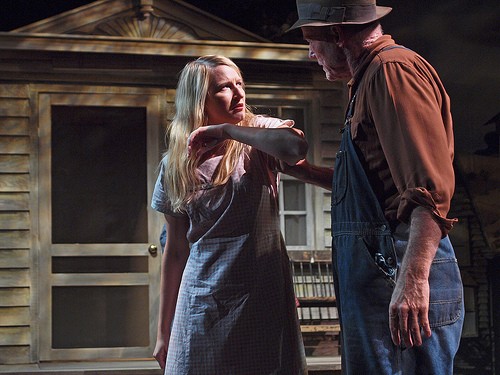 To Kill a Mockingbird, now playing at the Weston Playhouse, was adapted for the stage by Christopher Sergel from the classic and beloved novel by Harper Lee that depicts racial injustice, the power of moral conviction, and the loss of innocence.

Much entertainment today presents stories of high contrast, clear right and wrong, heroes and villains, all wrapped up and sealed with some kind of tidy triumph at the end. They mirror our current culture, which seems to be guided by the phrase, "If you're not with me, you're against me." To Kill a Mockingbird gives its audiences a much more adult and nuanced view of how the world works; of how ponderously incremental progress towards justice is made; and of how powerful the humble courage of one person can be.

The Weston's beautiful set and lighting immediately create the right mood for this memory play, told from the perspective of three children in Maycomb, Alabama in 1935. The weathered houses are shadowed by leaf patterns, which are beautiful, but which obscure the sharp edges of reality. A ray of sunlight streams down in the background, illuminating a far distant, but brighter future. The screen door of one house is ornate and flanked by colorful flowers. This is the house of Mrs. Dubose, the personification of the old order, proper, unbending, and traditional; an outwardly elegant exterior that covers an interior that is dying from a corrupting cancer. A second, less ornate house, has a large window with a bright white curtain and a front porch with a welcoming bench. It is the simpler, less conventional home of the lawyer Atticus Finch (James Lloyd Reynolds) and his two children, Scout (Kelsey McCullough) and Jem (Andrew Foster).

Throughout the summer, Atticus' children, along with their friend Dill (Isaac Freitas-Eagan), observe their father as he defends a black man who has been falsely accused of the rape of a young white woman. Atticus, played with calm assurance by Reynolds, has not sought the case, but was appointed by the court, yet he is resolute in his defense even in the face of the racism and threatening mob mentality of his neighbors.

As the summer passes, the children learn a great deal about life. They learn that rumors are unreliable, reason and justice don't always prevail, and, in a scene where they are threatened by a mad dog, that there can be more substance to a person than meets the eye. It is a time of enlightening discoveries, but also of coming to the dark, heavy understanding of our inability to magically right what is to us deeply and undeniably wrong.

Director Malcolm Ewen's production is straight forward and understated, not the rant of partisan one-upmanship, but the steady thrum of reason tempered, though not overcome, by empathy. The ensemble is solid with notable performances by Thursday Farrar as the motherly Calpurnia, Jeff Williams as the practical Sheriff Heck Tate, and Stewart Evan Smith as the scared, unjustly accused working man, Tom Robinson.

It's hard to accept Atticus's philosophy that, to make progress, we must respect the views of those with whom we passionately disagree, but the play makes a strong argument to do so. There is hate and injustice in this play, and there is strength, courage, and empathy. In it, the failures of justice don't engender outrage but grief and the enduring belief that some small progress has been made. Though we have a long ways to go, it is undeniable that we have moved toward a more enlightened future. What has gotten us here, respect, empathy, and tenacity, or outrage and power? It's a question the Weston's To Kill a Mockingbird will leave you with, and a question worth pondering.