A Musical Retrospective from Supremes to Disco 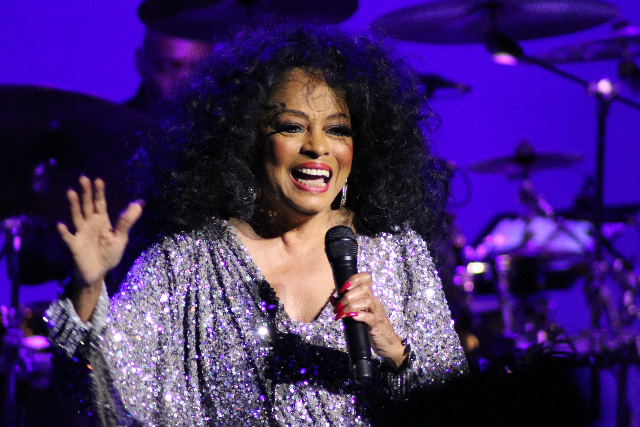 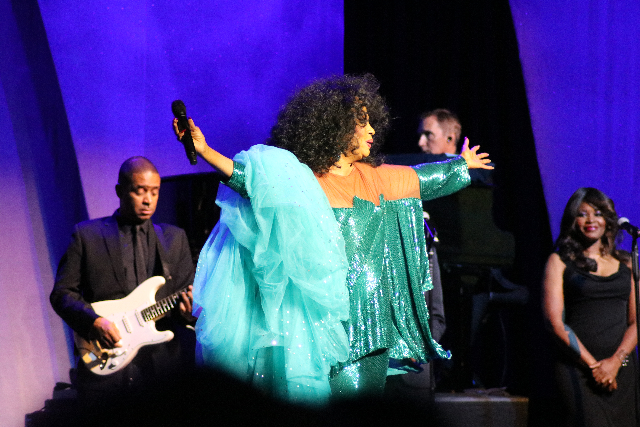 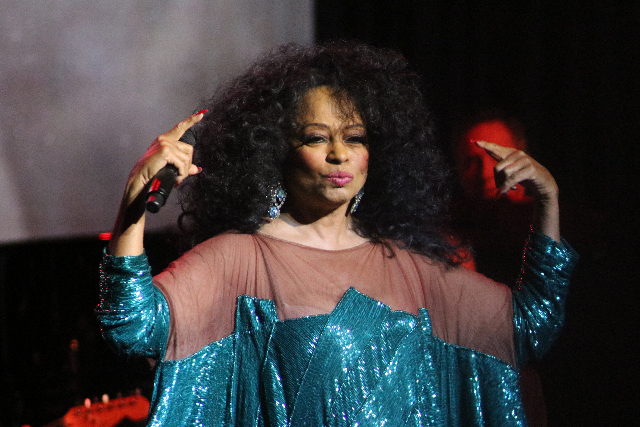 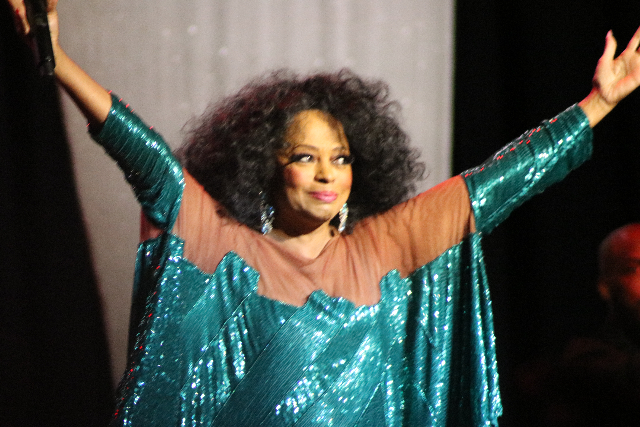 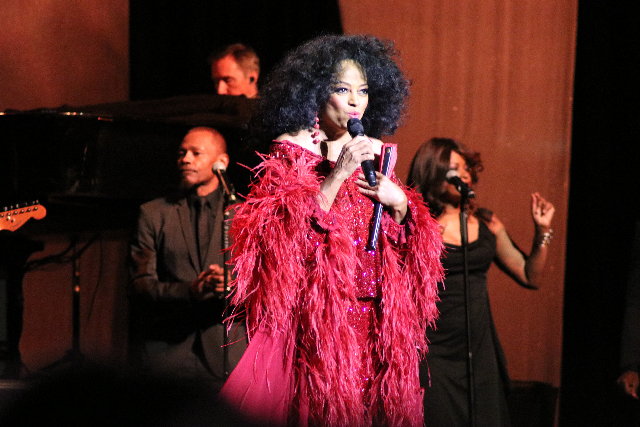 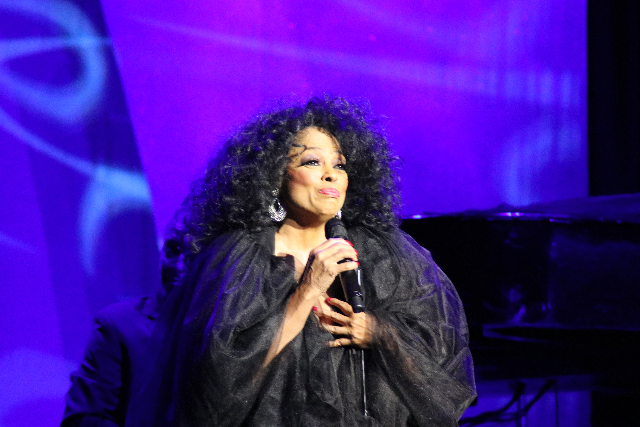 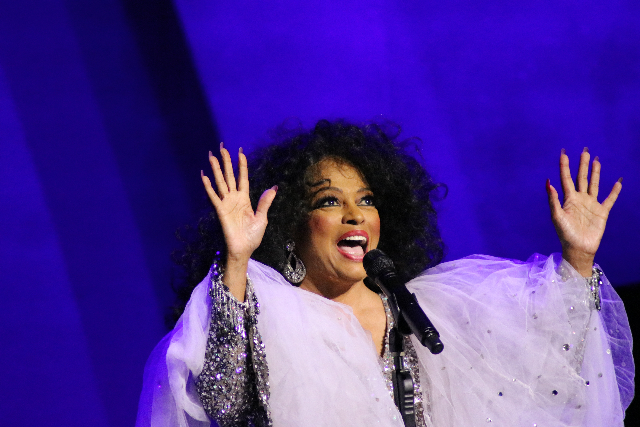 Making her first Tanglewood appearance in decades the 73-year-old diva, Miss Diana Ross (as she insists on being addressed), had them dancing in the aisles.

During the extended finale of the Gloria Gaynor disco anthem  “I Will Survive” security struggled to hold back throngs of primarily women of a certain stage, intent on getting up close and personal with the iconic soul sister.

Most unusual for Tanglewood there was a jury rigged curtain which was lowered at 7:15 PM.

Wrapped in an aquamarine flavored chiffon cocoon she swept onto the stage proclaiming “I’m Coming Out.”

The theme of love songs prevailed with an endless stream of hits that ended at 8:45 PM.

With no opening act it was a relatively early evening considering, for example, that the night before Sting who started at 8 PM was done just shy of 11 PM.

Perhaps, given the emphasis on glamour, Miss Ross requires her beauty rest.

In every sense the evening brought a Vegas/ Motown revue to the Berkshires. This of itself, given the venue and audience, was a bit of a non sequitur.

She was backed by an efficient but generic six piece band of guitar, bass, piano, drums, percussion and sax player. There were two male and one female backup singers.

When at intervals she exited for three costume changes the singers came forward and vamped; also the reed player offered a solo on tenor.

Not that it really mattered, perhaps it plays better in Vegas, she returned to the stage in similar versions of frothy cocoons and slinky sequined dresses in red, black, and white.

With a career that started from 1959-1970 with the “girl group” the Supremes she continues to be a polished if somewhat plastic performer. Every song came with a vocabulary of gestures often ending with head back and outstretched arms. During the Supremes hit “Stop in the Name of Love” there was that familiar outthrust hand. It was the iconic in your face gesture that froze an errant lover dead in his tracks.

Prowling about the stage she made contact with individuals in the audience including the “I see you” pantomime and air kisses. Through it all there was an incessant megawatt smile.  By the end of the set her cheeks must hurt.

The down side of a diva complex is demanding to be the center of attention. That started decades ago when the billing for the group Berry Gordy put together changed from The Supremes to Diana Ross and the Supremes. There were tensions and an eventual breakup of one of the dominant girl groups of the era. There were many such combos at a time when Gordy was into high concept packaging and promotion of the distinct brand of Detroit and its Motown sound.

Uniquely, Miss Ross went on to a distinguished solo career with an uncanny ability to morph with shifts of taste from  disco to Vegas style revues. She took her turn on the silver screen with less than distinction.

We were reminded of that when she insisted on performing a Billie Holiday standard “Don't Explain.” In a film bio she was hopelessly miscast as the tragic jazz singer. Yet again, she made clear that she has no feeling for jazz.

Gravitas, pain and suffering are not her thing. Even the sad love songs are projected as upbeat with that frozen smile. Fortunately, Holiday was accurately cloned in a Tony winning performance by the magnificent Audra McDonald.

In Lenox Miss Ross delivered a daunting evening of greatest hits. They were delivered like tracks of an album. As they say, the hits just kept on coming to the utter delight of  the audience.

Titubating down memory lane we were reminded that “My World is Empty Without You Babe.” Indeed. She strung together Top 40 hits like “Baby Love” “Stop in the Name of Love” and “Come See About Me.” It is unusual to front load the hits which are generally saved to end a concert and crank up as encores.

It is a signifier of the density of her tool kit that she dispatched what the audience came to hear so early on. She continued with “You Can't Hurry Love” then “Love Child.”

There was a a break and she returned in red. She continued with “Love Touched Me” then her 1980 disco hit “Upside Down.”

Perhaps the emotional highlight of the evening occurred during her version of “Endless Love” then “Love Hangover.” By 8:10 PM she was pleading to be taken higher in a quest for cosmic change.

She came back in black asking the audience if they liked jazz and the blues. That prefaced the misstep of “Don’t Explain.” It was interesting that she wore black to evoke the blues which doesn’t appear to be a part of her natural vocabulary.

One  begins to wonder about a repertoire entirely focused on love. It appears to be the only emotion she explores. Arguably it cuts back to that diva sensibility of craving attention  and reassurance from lovers and fans. It is interesting to develop a career based on such a limited range. There is, however, no argument with the success of that strategy.

It was surprising to hear her cover the 1956 hit “Why Do Fools Fall in Love” by Frankie Lyman and the Teenagers. He overdosed not long after. Great song though and perfect for her.

Changed to white, from her 1975 film Mahogany she performed the easy listening theme music of “Do You Know Where You’re Going To?”

It’s interesting  that to kick the set into high gear with a smashing finale she opted for covers. She performed “Ain’t No Mountain High Enough” composed by Nickolas Ashford & Valerie Simpson in 1966. It was a hit for Marvin Gaye and Tami Terrell.

Then she brought it all home with Gloria Gaynor’s anthem “I Will Survive.”

Indeed she has as her Berkshire fans went home entirely satisfied.