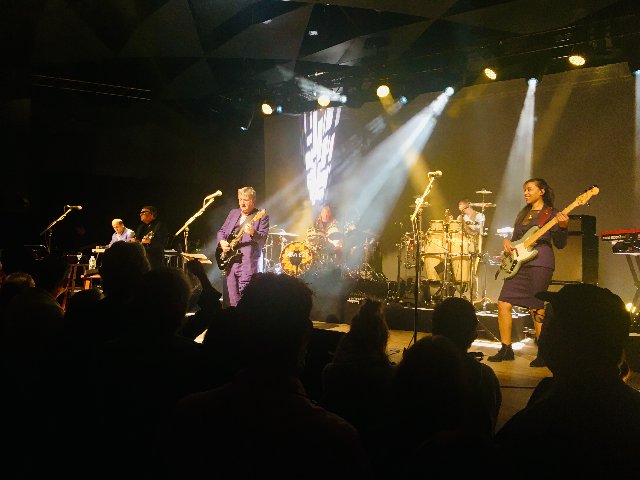 
On a cool summer evening inside Tanglewood’s  Music Shed, the house  lights were dimmed, while the theme from 'The Magnificent Seven’ was played over the sound system. One by one, the seven members of the British band, Squeeze, were introduced to the enthusiastic audience.

If you are a Squeeze fan, the iconic founders of Squeeze, some forty years ago, Glenn Tilbrook and Chris Difford were the last two band members that were introduced. The long ovation created the connection between the audience and the band, specifically, front man, Glenn Tilbrook,.

Difford and Tilbrook are the creative forces behind Squeeze. Difford writes the songs, while Glenn Tilbrook interprets  the songs onstage.

The tour is billed as ‘The Squeeze Songbook Tour.’ Difford and Tillman created the band, concept and memorable ‘icon’ status during the day. Their worldwide fame, I was told, embodied both the U.K. and New York City at the same time. Audience members shared their ‘Squeeze’ stories with me-only making me more anxious to hear the band in its tour form- even though there are only two original members left.

Listeners to AM and FM radio plus Sirius have heard their songs for decades. With nineteen (19) Top 40 hits, its nearly impossible not to get your daily dose of Squeeze.

The song that most identifies Squeeze is ‘Pulling Mussels from the Shell.’  The lyrics paired with the innocent voice of Tilbrook still haunts us.

On stage, the band was not flashy. Dressed, mainly in tie-less suits with vests, Squeeze performed their ‘Songbook’ hits like an orchestra on stage, led by conductor Glenn Tilbrook, with composer, Chris Difford, at his side.

Difford, with a voice like Roy Orbison, shined as lead vocal for an early hit of the band, ‘Cool For Cats.’ He stole the show for a split second until Tilbrook resumed vocals with ‘Up the Junction’ and ‘Take Me, I’m Yours.’

After forty years onstage, Squeeze still has what it takes to be the bellwether band they were, back in the day. Glenn Tilbrooks voice has remained the same. It is pure and Squeeze’s instrument for years to come.

The U.S, tour ends in late September, followed by a stint in the U.K., before heading to New Zealand and Australia.

Tilbrook and Difford are often referred to, as a great duo, much like, Lennon and McCartney. Their songs have earned them the recognition as ‘prolific songwriters.’ The songs I highlighted earlier from the Lenox performance are just a few from their ‘Songbook.’ Other noteworthy songs they performed at the concert were ‘Cool for Cats’; ‘Black Coffee In Bed’ and the mega-hit ‘Tempted.’

The crowd in the Shed were on their foot for the two hour show, with audience members dancing in the aisles from the start to the finish of the concert.

They are still my main squeeze.