Losing It at the Movies 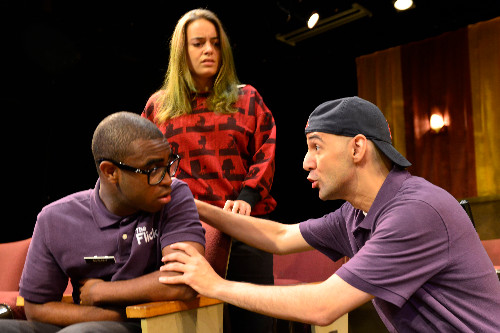 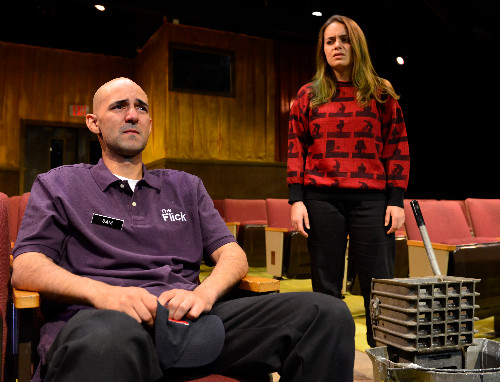 Rose hardly gives the smitten Sam the time of day. 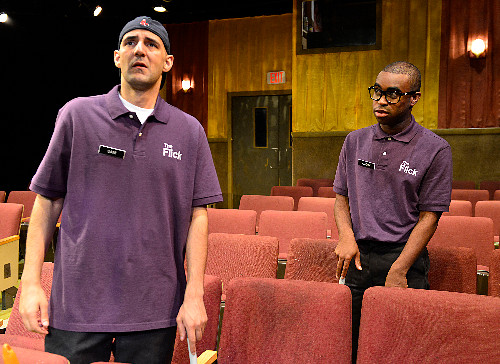 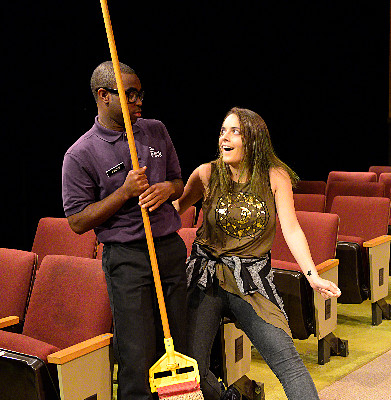 Rose makes a ,move on the up tight Avery.

With a running time in two acts of just under three hours the 2014 Pulitzer Prize winning drama Flick, by Annie Baker, at Gloucester Stage initially seems agonizingly slow and soporific.

Sitting through an interminable first act we wonder why we care about three losers who earn a meager living during the final days of a one-screen, analog movie theater in Worcester. It is on the cusp of either closing or being converted to digital.

On three sides we face the small theatre with its projection booth pointed toward us.

Between shows Sam (Nael Nacer) sweeps up the popcorn and mops between seats. He is breaking in the new guy Avery (Marc Pierre) on their mundane, repetitious chores. In the projection booth is Rose (Melissa Jesser). There is a fourth character (Skylar/ Dreaming Man) played by James Wechsler who has two scenes and a few lines.

In an update of The Last Picture Show or Cinema Paradiso this house of flicks could be anywhere at a certain moment in time when the major studios switched to all digital. Small movie art houses like Images in Williamstown faced the decision of acquiring expensive digital projectors or going out of business.

With playwright Baker, born in 1981 and raised in Amherst, the drama/ comedy has uniquely Massachusetts and mid-state references. Sam who speaks with a strong, site specific, working class accent wears a reversed Red Sox cap on his shaved head.

For Sam and the androgynous Rose, dressed in non-descript layers by Lara Jardullo, there is no future other than scratching out a meager living working for the movie theater on its last legs.

The African American Avery, sporting goggle like, nerdy black rimmed glasses, is introspective, arguably brilliant, depressed and taking a break from nearby Clark University. His father is a professor of Semiotics and Linguistics. We learn that his mother has left the family for an old boyfriend she connected with on Facebook.

The confused, painfully shy and understated Avery is taking a semester off to get his head together. There really is no future or alternative for Rose and Sam.

The trope of the play is repeated to the point of agonizing tedium. Over and over the flickering projector stops and the duo come in and execute their Sisyphus-like chores.

Against this cycle of endless repetition with long Pinteresque pauses (actually some fifteen minutes have been shaved off compared to other productions) we come to be ever more involved with the escalating banter of the dullard losers.

By the mid second act we are entirely enthralled with the intensity and reversals of the finely crafted play. We come to care deeply about the three characters. The fourth being little more than a walk on and throw away although deftly felt and total dufus by the utterly deranged looking Wechsler.

In this seemingly mundane play there are in fact complex love triangles and a daunting, ultimately shattering moral dilemma.

We are utterly floored to end up caring so deeply about three losers, well perhaps two and a half, that initially we didn’t give a fig about.

While it seems to take forever this is a play that works its way first into your head and then your heart. By the end of a long performance we feel utterly absorbed and emotionally shattered.

The focal point of dialogue and action is Sam. He is the catalyst for drawing out Avery and involving him in a scam. Clearly he cares deeply for Rose who barely gives him the time of day.

There is a woman buried under those non-descript layers of clothing but the sexuality of Rose is a mystery. She is representatve of women in transition about their bodies who don’t want to be seen as objects of desire. But there is a hitch. Things are not what they appear not to be. Which, I know, is a double negative and why it is all the more intriguing. It’s what drives Sam bonkers and so madly, utterly smitten.

In a totally wrong move on Avery we learn the depth of his identify crisis and conflict.

The three characters are revealed as amazingly complex particularly given that they are numbingly generic and utterly lacking in charm or charisma. Initially they are about as interesting as a kid bagging groceries at Big Y.

Much of the credit for being absorbed by them, in addition to the brilliant writing of Baker, is the fine acting of three young players. Ok four. The director, Bridget Kathleen O’Leary, has given them time and space to slowly but surely hone and develop deeply felt and nuanced performances.

With compelling commonality we learn that they really love movies. Initially Sam tests Avery with a game of six degrees of separation. Two movie stars are identified and then Avery must connect the dots through several movies. This challenge starts fairly easy but becomes ever more esoteric and complex.

We learn that Sam is a fan but on every level Avery is a scholar and connoisseur of cinema. There is a lot of love in that old movie house above and beyond sweeping up popcorn and sharing illicit meal money.

It may take a double espresso during intermission to endure the O’Neill-like length and complexity of a Baker play but this fine production left me ravenous to experience more of her work. I was absolutely dying for a box of popcorn.