The Flick by Annie Baker 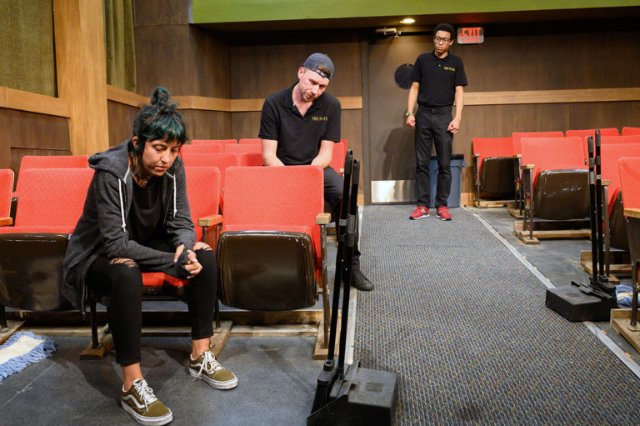 The setting and the dominant “what it’s all about” theme seem evident from near the outset of Annie Baker’s comic social commentary The Flick, but as the narrative proceeds, multiple dimensions reveal a complex thematic web built on only three main characters. After a static beginning, the story seizes the audience’s attention, and Shotgun Player’s execution of the piece is near matchless.

Set in contemporary time, the action takes place in an old fashioned, single-screen movie theater with a traditional film projector (this is significant) rather than the digital technology that has overwhelmingly supplanted it in the marketplace. Three low skilled workers run the operation – two front-of-the-house employees handle box office, concessions, and clean up, while another runs the projector and helps out in other areas.

Industries with menial jobs fill the world, full of mind-numbing repetitiveness, boredom, and small talk about the highlights from the work’s most memorable events, insignificant though they usually are. Most of those jobs, from warehouse clerks to baristas, operate in an environment with little enrichment or interest to outside parties. Cinema house workers at least benefit from observing the stimulating world of fantasy in an industry that has great social interest and significance. This factor also enhances its theatricality. One of the relevant devices that the playwright uses to demonstrate the interesting byproduct of these menial jobs is that the two men repeatedly play the movie version of “Six Degrees of Separation.” (The game is illustrated below the review).

Baker endows her characters with very different traits. At age 35, Sam is the oldest and longest tenured at the cinema. He is a dead ender but is a big movie fan and pretty reconciled to his fate. Rose is a more recent hire but was promoted to the projection room over Sam. Vivacious and seemingly carefree, she attended some college and incurred debt that, like many others, she really has no means for repaying given her income prospects. The recent addition is Avery. A sensitive young black man with deep love and encyclopedic knowledge of movies, he is mysteriously “taking a break” from his college education at Clark University, where he has a free ride because his father is a professor.

The players socialize comfortably, but their disparities will drive the relationships and reveal clefts as when Avery thoughtlessly asks the hapless Sam “What do you want to do when you grow up?” The trait differences will especially influence the defining moment of the play, which adds another dimension to a situational ethics issue that runs throughout.

Baker’s insights into the psyches of the characters rings true as does the realism of the issues and incidents they confront. The pace of the character exposition engages the viewer. It’s hard to know the destination of the plot, and there are some little surprises along the way. While the total consequences of the action lack profundity, the viewer will probably care about the happenings.

One weakness in the storyline is the playwright’s inability to edit down from a three-hour running time to a length reasonable for the topic matter. Like many contemporary movie directors, she seems unable to abandon story elements that may stand well on their own but dilute the overall effect. One tract that is an unnecessary waste of 10 or 15 minutes is the opening scene. Not only does it bore to tears, but it takes some time for the audience to put that experience behind them and hope that things will get better. Fortunately, they do.

Shotgun Players’ production under director Jon Tracy is sterling. The look of Randy Wong-Westbrooke’s set, the rear rows of a cinema house along with the projection room seen through two windows, may be well specified, but the execution is spot on. Also, the lighting deserves recognition. Rather than theatrical illumination, lighting director Kurt Landisman uses many forms of commercial lighting to create realistic effects. Casting of the roles is excellent. Chris Genesi portrays Sam’s woefulness about his fate but seems to understand the way of the world and his place in it. Justin Howard conveys a fragility in look and affect that suit Avery’s complex character. And Ari Rampy captures the coquettish surface of Rose along with a darker side.

The Flick by Annie Baker is produced by Shotgun Players and is performed at Ashby Stage, 1901 Ashby Ave., Berkeley, CA, through September 22, 2019.

[It may be clearer to give an example of the movie version of “Six Degrees of Separation” than to try to explain the rule.  For instance, the challenge may be to connect Jack Lemmon to Dustin Hoffman in six or fewer movie links.  One of many possible solutions would be: 1) Jack Lemmon and Shirley MacLaine in The Apartment, 2) Shirley MacLaine and Jack Nicholson in Terms of Endearment, 3) Jack Nicholson and Tom Cruise in A Few Good Men, and 4) Tom Cruise and Dustin Hoffman in Rain Man.]