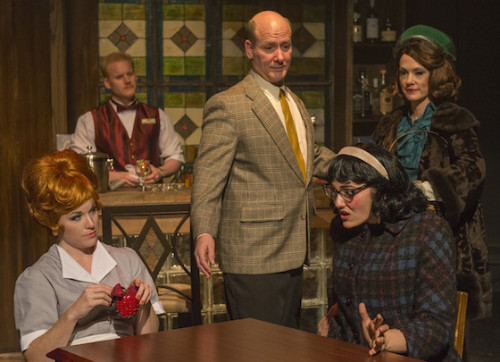 The dentist has a lot of tricks in his bag, but they're not enough to save him from his fate, or for that matter, to save this rather uneven production at Profiles Theatre.

Beth Henley's 2012 play, The Jacksonian, is a bit of noir, a bit of Southern Gothic decay, and set in a nondescript motel of that name on the outskirts of Jackson, Miss., in 1964. Joe Jahraus' direction is paced right and moves the action easily among the three settings in this 90-minute production. The five-member cast is capable, with Tim Curtis providing a strong performance as the drug-addled dentist Bill Perch, whose dental practice as well as his marriage are in decline. Juliana Liscio as his daughter, Rosy, gives a touching performance. (Liscio is a new high school graduate, ready to begin college as a Loyola theater major.)

The problem is the script itself, which, as the playbill notes, moves through scenes in a non-linear way. This wouldn't normally be a problem; we're used to seeing theater and films with dramatic time-shifts. In The Jacksonian, the characters and story keep your interest throughout. But the fragmented nature of the story and its effort to weave in a subtext about the civil rights era issues and activities means we're left with an incoherent whole.

Rosy, the teenaged daughter of the dentist and his estranged wife, Susan (Rachel Sledd), is the narrator/seer who observes and comments--sometimes elliptically--on the action. Wrapped in a blanket most of the time, Rosy is Cassandra in a cocoon.

Rosy's dentist father has moved out of the family home and has been living In the Jacksonian Motel for several months. Most scenes of the play are set, as the playwright describes, "December 17, 1964. The night of the murder."

I'm not giving away any spoilers here. The first time we see Bill Perch, he looks distraught and has blood on his shirt and hands. And Rosy says, in her opening speech:

"There is a Christmas tree at the motel. But it is not the real tree. The real tree is at home. And it is before -- Before a time that makes the time of murder."

We get acquainted with the dentist as he sits at the motel bar, lecturing bartender Fred (Christian Isely) on the importance of dental health and bragging that he's known as the Painless Dentist. That's partly because "I do use anesthesia when needed. Many options there, Fred: nitrous oxide, Novocain, lidocaine, Sodium Pentothal, chloroform." It turns out that Bill has all of those in his dental bag and uses them liberally himself. When he brings out the nitrous oxide inhalation machine in a motel room scene, I was reminded of Dennis Hopper's character in David Lynch's Blue Velvet. That film is a little more Grand Guignol than The Jacksonian, but the two characters are similarly damaged and predatory.

Betsy Bowman plays her sexpot role as Eva White, the waitress and motel maid, with a broad Southern accent and matching bigoted attitudes. She is set on marrying Fred, but when he dumps her, she turns her interest to Bill Perch. Both Eva and Fred show their local attitudes and contribute to the story's dark, Southern Gothic overtones.

Katie Bell-Springmann's design enables the scenes to jump from Bill's motel room to the outside ice machine to the hotel bar/restaurant, with the help of Michael Rathbun's lighting design. Henley notes, "The motel exists as a haunting memory, a sort of purgatory that was Jackson circa 1964." Frequent blasts of fog seem intended to remind us that this is a memory play. Raquel Adorno's costume design includes Perch's bad '60s jackets, Eva's black lingerie and giant red bouffant hairdo, and bartender Fred's Edwardian vest and bowtie.

Beth Henley, a native of Jackson, is author of 16 plays, including the Pulitzer-Prize-winning Crimes of the Heart and The Miss Firecracker Contest. She is known for the Southern regional touches in her plays. The Jacksonian's first production, directed by the Goodman Theatre's Robert Falls, was at the Geffen Theatre in Los Angeles and later moved to New York. Its star-studded cast included Ed Harris, Bill Pullman, Amy Madigan and Glenne Headly, formerly of the Steppenwolf Theatre ensemble.

Profiles Theatre's production of The Jacksonian continues at 4139 N. Broadway through October 11. Performances are Thursday through Sunday at varying times. Tickets for $35-40 can be bought online or by calling 773-549-1815.