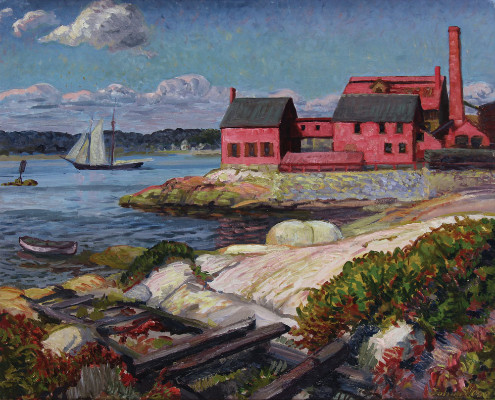 The Tarr Paint Factory in Gloucester. Images courtesy of The Cape Ann Museum and Artists Rights. 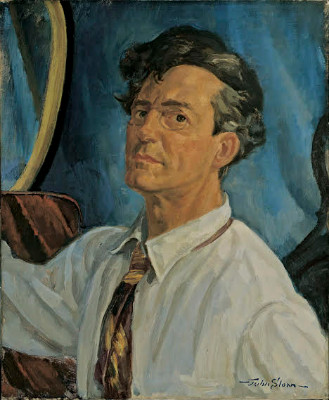 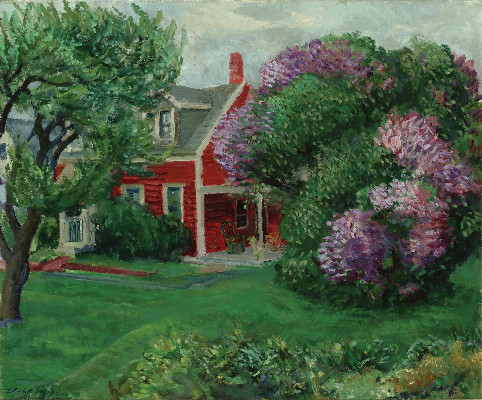 This is the red house which Sloan rented. 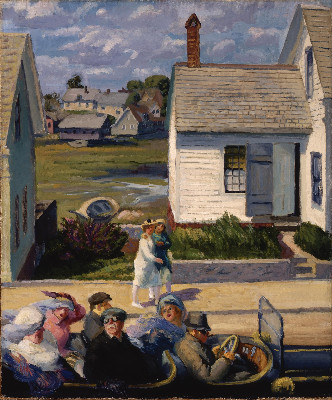 This genre painting of Gloucester is owned by the Norton Museum in Palm Beach. 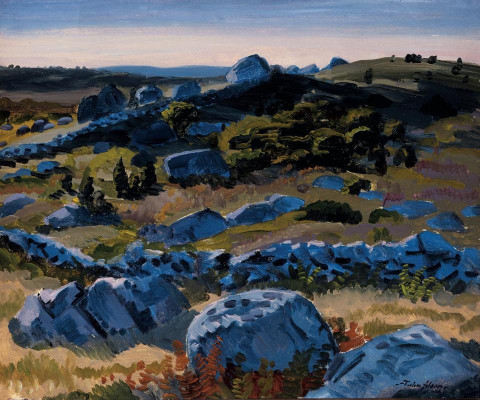 A view of Dogtown loaned by the Georgia Museum. 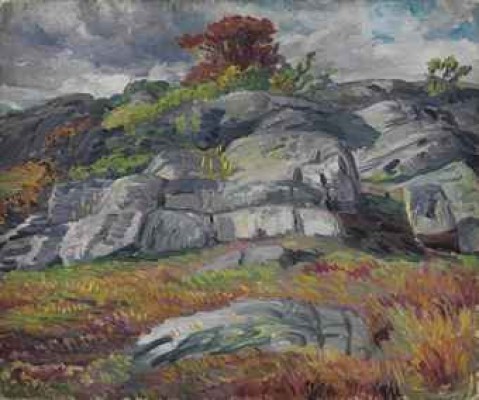 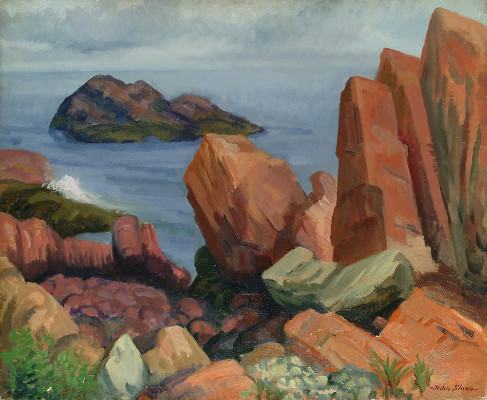 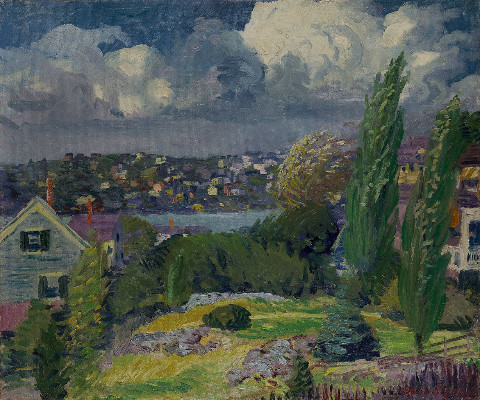 A breezy day in Gloucester. 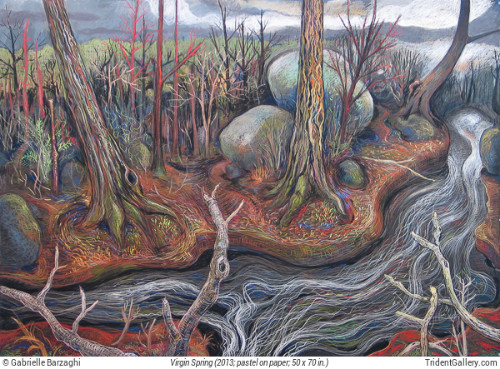 Virgin Spring a pastel on paper drawing by Gabriella Barzaghi at Trident Gallery.

Through November 29, the Cape Ann Museum is presenting a stunning exhibition of 39 plein air painting, four from its collection and the rest loans from museums and private collections, in John Sloan Gloucester Years.

The Philadelphia born realist painter Sloan (1871-1951), trained as a newspaper illustrator, traveled from New York to Cape Ann for summers of intensive painting from 1914 to 1918. At that time the journey represented considerable time and effort.

I recall long drives along the shore through Essex before the completion of Route 128. Once finished that morphed Gloucester into a relatively accessible commute from Boston.

With its many options from the untamed interior of Dogtown Common, pastures and fields, to the rocky shore and colorful streets of Gloucester and Rockport, artist like Sloan and others of the progressives bracketing the seminal Armory Show of 1913, found great inspiration for their work.

There is an uncanny confluence between the blockbuster exhibition of landscape paintings by van Gogh at the Clark Art Institute in Williamstown and the less trafficked Sloan show in Gloucester.

They have many points of commonality.

At least during Sloan’s Gloucester period they shared a feverish intensity. Seemingly every day that weather allowed they headed out with the paints and portable easels. During this most productive phase of his career Sloan created some 292 works.

For both artists struggling to make a living nothing sold. Today a major work by Sloan sells in the low millions while those by van Gogh set auction records.

While respected in the field of 20th century American Art the work of Sloan is not well known by the general public. Given the direct and modest nature of the diverse paintings on view perhaps this thoughtful, well curated and scholarly show will change hearts and minds.

For those inclined to look long and hard there is an intensity and bravura attack to this series of studies from nature. There is a learning curve about color and texture of paint that he would take back to the studio in New York.

It helps to be familiar with the sites and terrain of Cape Ann. I took particular delight in discovering a Sloan painting of my great uncle George Nugent’s pig farm. It was located along Nugent Stretch between Rockport and Gloucester.

There are a few entertaining pictures that convey traffic on the main streets, landmarks and colorful characters. This is more like the illustrative approach that earned Sloan and his fellow artists, The Eight, a demeaning designation as The Ashcan School. They were noted for a vernacular approach to genre subjects. Their socialist political views oriented them to depicting the immigrant and working class.

As a trained illustrator and leftist Sloan was recruited to create strident images for the radical magazine The Masses.

The progressive artists of his generation was more notable for their political stance than formal invention and spatial experimentation. They were blown away and relegated as provincial in comparison to the European avant-garde of the seminal Armory Show of 1913.

Two thirds of the Armory Show featured American artists including Sloan. But it was the European art that drew deadlines. A reporter dubbed Duchamp’s Nude Descending a Staircase as An Explosion in a Shingle Factory. Former President Teddy Roosevelt told reporters that he found Navajo rugs more beautiful and interesting than cubist paintings. He may have been right about that.

The Americans got little or no ink in the media.

The leftist illustrations of Sloan and genre subjects of his peers morphed into the Social Realism that dominated American art through the years of the Great Depression. After the war this generation of radicals, Regionalists and WPA muralists were eclipsed by the emergence of the New York School and Abstract Expressionism.

Exploring the arc of modernism artists like Sloan who summered in Gloucester were marginalized as conservative and provincial. Within their own terms and context they were progressive and radical particularly when compared to the Brahmin dominated, European influenced, mainstream of American Impressionism.

Touring the museum exhibition it is difficult to intuit just how Sloan was experimental and progressive. There is a too ready resemblance, particularly given his subject matter, to the Rockport school of realism which is so appealing to tourists.

Compared to which there is an austerity and compelling discipline to Sloan’s experiments in vibrant color and direct observation of nature. Too often the works of successful contemporary Cape Ann realists is numbingly formulaic.

There is none of the edge that one finds in the works of artists of Sloan’s generation. Edward Hopper often depicted the homes of Gloucester fisherman or the railroad yard. Marsden Hartley mostly created views of Dogtown Common. Stuart Davis was developing a proto pop style. The outsider realist Milton Avery was inspired by nautical themes.

By 1919 Sloan started to spend summers in the Southwest which was also a destination of Hartley. For reasons that invite research the progressive art colonies of Gloucester and Rockport phased out and attracted less ambitious artists. Art colonies in Provincetown and East Hampton thrived and attracted the best artists.

Growing up in Annisquam we spent non beach days exploring shops and galleries on Bear Skin Neck in Rockport or East Gloucester on the edge of the harbor.

The assumption was that serious culture did not exist on Cape Ann.

During a recent week with family and friends in Annisquam there were reasons to think differently.

Last summer we visited the Trident Gallery on Main Street a short walk from the museum. We wrote about an exhibition by the artist Susan Erony. With her husband, the multi media artist Jay Jaroslav, we knew them during years of covering the Boston art world. My wife, Astrid Hiemer, interacted with Jay when he was a fellow at the Center for Advanced Visual Studies at MIT.

Dropping in on the gallery, which features the progressive artists of Cape Ann, it was a delight to see the expressionist, landscape pastel drawing of Gabrielle Barzaghi. There is another of her works currently on view in the permanent collection of the nearby museum. Now both retired we had been colleagues of the New England School of Art & Design at Suffolk University.

As a part of our visit my sister Pip organized a reading from my books Shards of a Life and Total Gonzo Poems at the Annisquam Village Library. The event was well attended including several poets.

A boyhood friend, the poet Geoffrey Movius and his wife Barbara, hosted a lively dinner party. We learned much about the rich history of Gloucester poets including Charles Olson and Vincent Ferrini. Much of this dialogue was conveyed in exchanges between Movius and his friend the poet Gerrit Lansing. Their depth and rich anecdotal commentary was exhilarating.

The Gloucester Writers Center in East Gloucester is a lively matrix for the literary life of Cape Ann. Its director, Henry Ferrini, organizes residences for poets as well as a busy schedule of public readings by visiting and resident authors.

There is discussion of a reading by Annisquam poets including Movius, Melissa de Haan Cummings, Joe Millar and the widely published Anne Babson Carter.

The Gloucester Stage Company was co-founded in 1979 by Geoff Richon, Denny Blodget, and award-winning playwright Israel Horovitz as a “safe harbor for playwrights and new plays”. For its first seven seasons, the company performed at the historic Blackburn Tavern in downtown Gloucester.

During our recent visit we covered the Pulitzer Prize winning play The Flick by Annie Baker.

In returning to Cape Ann after an absence of years there were insights and discoveries. That equates to compelling reasons to return and become more actively involved with a growing community of serious and committed artists in a range of disciplines from the fine arts and theatre to literature.

There is a further impetus to dig deeper into my personal heritage as a descendant of the vast Nugent clan of Rockport. Between 1875 and 1900 my great grandparents, Patrick and Mary Nugent, raised thirteen children on Beaver Dam Farm.

Soon to be a book and major motion picture.