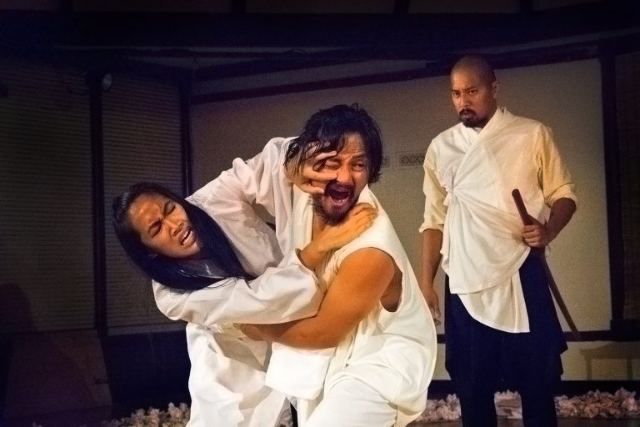 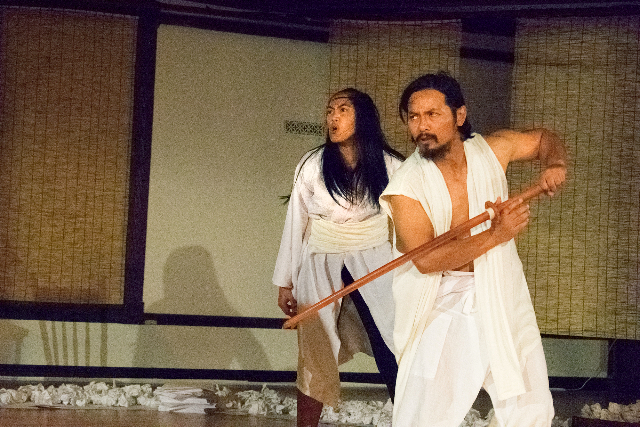 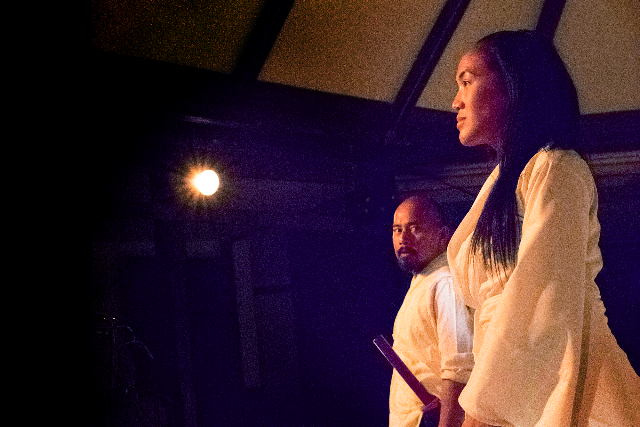 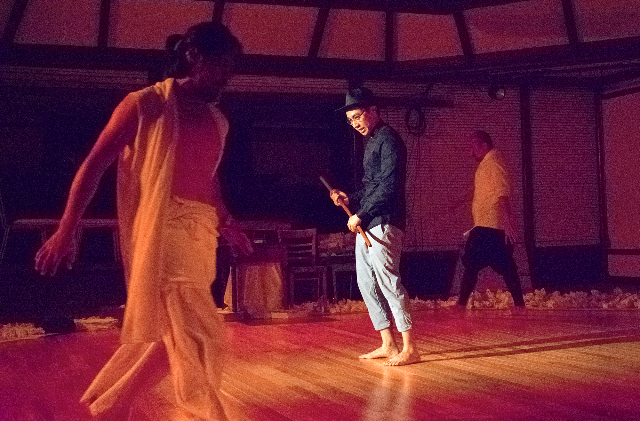 “The truth is rarely pure and never simple,” from “The Importance of Being Earnest” by Oscar Wilde.

Few works in any category of art receive overwhelming acclaim for their universality and timelessness. Such is Rashomon, Akira Kurasawa’s 1950 classic film, based on two early twentieth century short stories by Ryunosuke Akutagawa – In a Grove and Rashomon. Ubuntu Theater Project now presents a compelling and highly recommended world premiere theatrical production of Rashomon, adapted to the stage by leading American playwright and Bay Area resident, Philip Kan Gotanda.

The narrative concerns the murder of a samurai and the rape of his wife. One by one, four victims and observers each tell a version of events that is contradictory to the others. Thus, the central moral theme is a mash up about the subjectivity of perceived “truth” and the consequences of falsehood. In this instance, these characters are actually lying to save face, as each has something to hide.

Indeed, this sequential revelation of interpreted facts by different observers has become enshrined in procedural plots as the “Rashomon Effect.” But one essential distinction between the seminal work and its namesake effect is that the original does not resolve the conflicts of “facts”, whereas in the contemporary usage of multiple perspectives of facts, truth unfolds in the final version presented.

Gotanda’s version of Rashomon serves the original well in its shape and dramatic intensity. Director Michael Socrates Moran has engineered a minimalist look and feel that serves the script well. Ubuntu’s clerestory-like, almost-in-the-round theater, with its wooden framing around the stage, gives the appearance of a primitive cage for blood sports. Yet the dominant set feature is delicate and zen like – an encompassing ring of wadded papers, presumably the author’s failed attempts in grappling with the subject matter. Dramatic lighting and ominous sound complete the powerful stage effect.

Four everpresent actors constantly stalk the space engaging in lies and confrontations. The cast is superb in look and in performance. Jomar Tagatac is imperious and commanding as the samurai. Ogie Zuleta is earthy and monkey-like in his movement as the bandit. And Christine Jamlig is assertive and sometimes hysterical as the lady. Against these harsh characterizations, Steven Ho conveys a bemused innocence when he wanders about as the story’s author, Akutagawa. His presence also provides comic relief from the fierce passion of the others.

Although the story is set centuries ago and half a world away, the playwright’s twists yield messages very much of our place and time as a condemnation of the political tragedy that is quickly consuming society’s goodwill. We now suffer through a nightmare in which a leader who pathologically lies declares any reportage in the media that is critical of him to be “fake news.” In turn, public faith in a vital institution in the lifeblood of democracy is eroded.

In the play, an accusation of pedophilia is made. Once divulged, whether it is true or not, its impact on the accused cannot be withdrawn. And Akutagawa observes that whoever lies the loudest wins the day. Donald Trump has used this tactic to smear those he perceives as political and personal adversaries. Lacking any evidence whatsoever, his loudest and most enduring lie was that President Obama was not born in the United States. To this day, a large percentage of right wingers continue to believe this, because they are predisposed to accepting a lie that conforms to their pre-existing schema. In that case, they “believe” the lie because it questions the authority of a man that they seek to undermine.

As a Japanese-American, Gotanda may also draw from his own heritage in explicating this point. Scurrilous lies were spread about Japanese in the U.S. following Pearl Harbor. Racist and unfounded suspicions about their loyalty to their adopted country contributed largely to the groundswell of support for establishing the wartime internment camps. Echoes of the historic and continuing mistreatment of Japanese, African Americans, Native Americans, Jews, and other minorities in this country are now in evidence with this administration’s draconian immigration policies.

Those already familiar with Rashomon will find this realization to be worthy. Those who are not familiar with it should become so through this powerful production about themes of great importance. It is fair to note, however, that along with its overwhelming strengths, room for improvement exists. Often plays that are fast-paced and thick with information and meaning overpower the viewer’s ability to absorb everything. This challenge is exacerbated here because three of the actors play two roles each, and often it is hard to pick up which role the actor is in. This could be fixed through minimal rewriting and/or costuming. In addition, the acoustics in this unique facility are generally fine, but there are situations in which dialogue is not clear.

Rashomon by Philip Kan Gotanda, adapted from the stories of Ryunosuke Akutagawa and the movie directed by Akira Kurasawa is produced by Ubuntu Theater Project and plays at its stage at Brooklyn Preserve, 1433 12th Ave., Oakland, CA through September 17, 2017.

Reposted from For All Events by Victor Cordell.