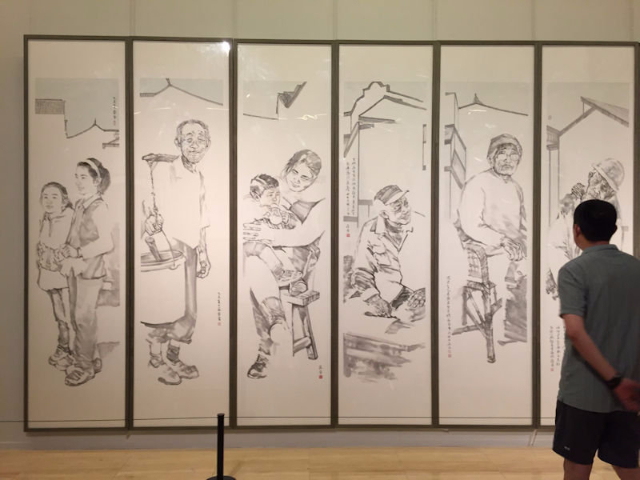 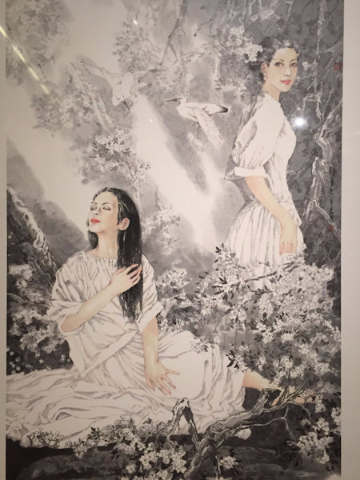 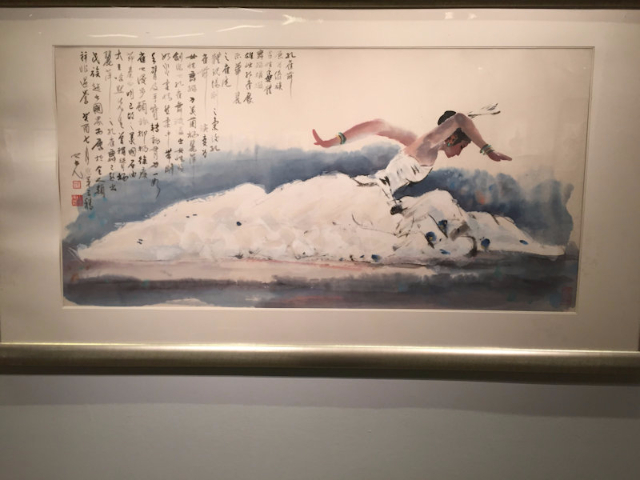 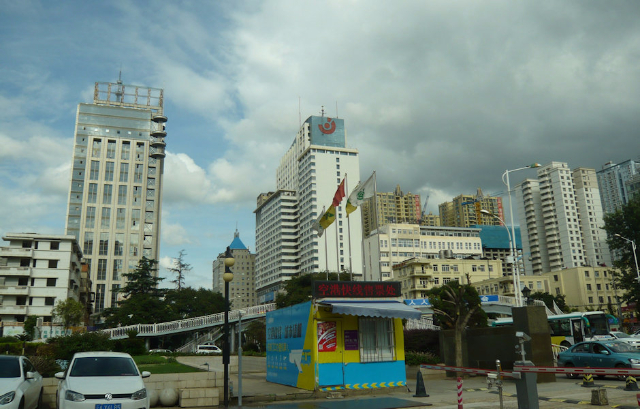 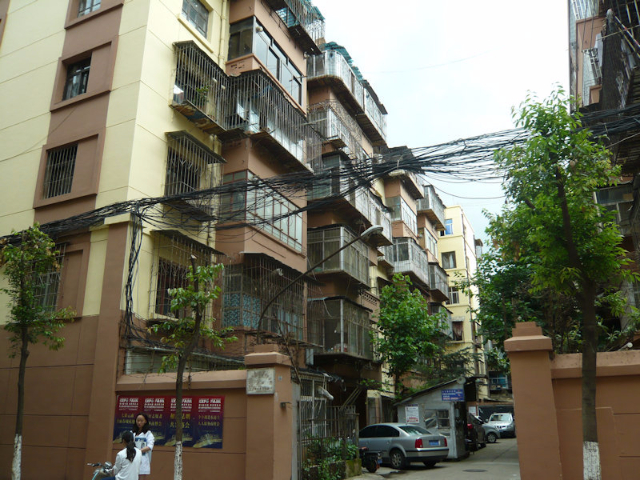 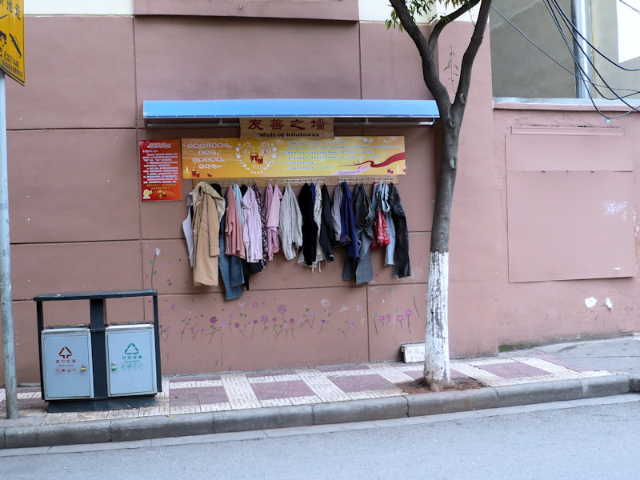 Clothing left for the needy by apartment dwellers 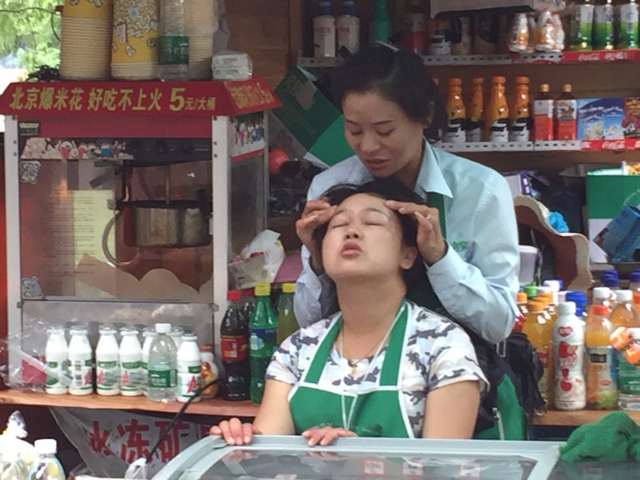 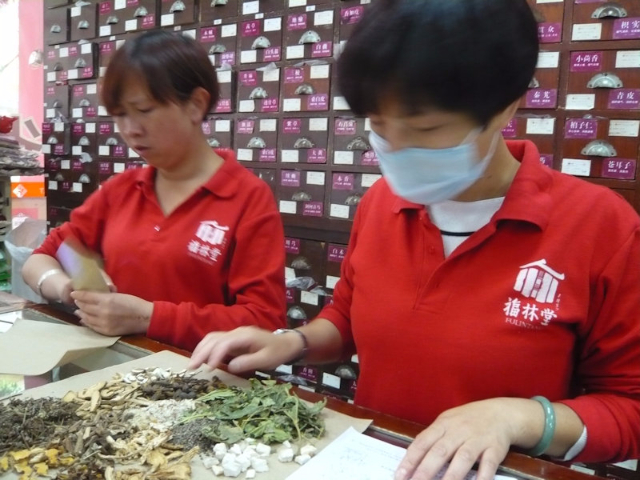 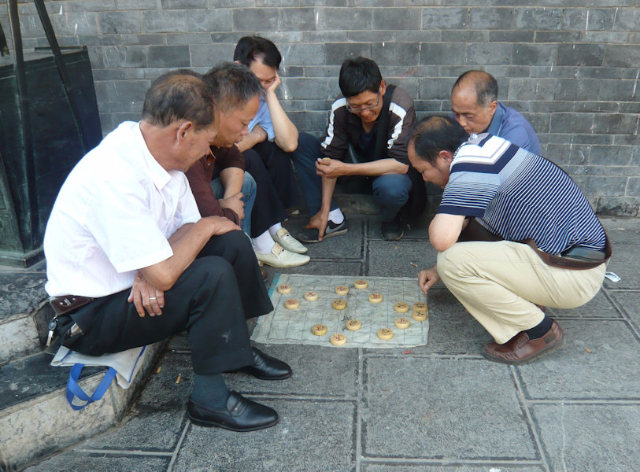 Men playing checkers on the sidewalk 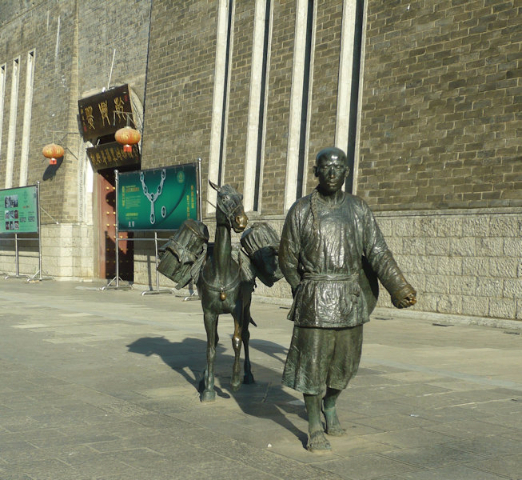 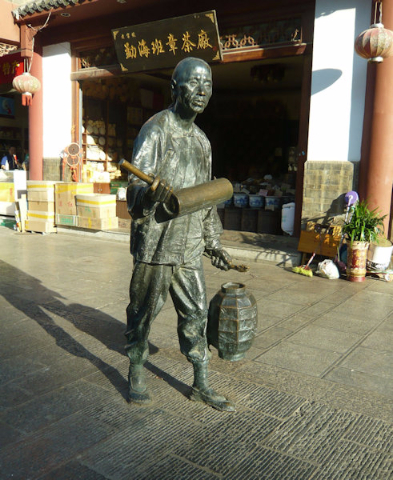 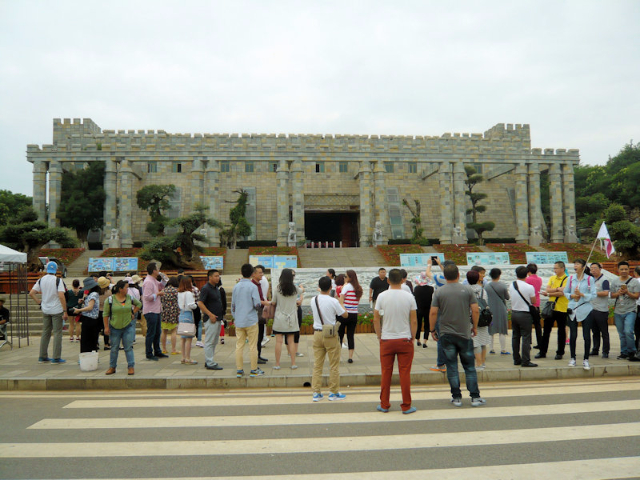 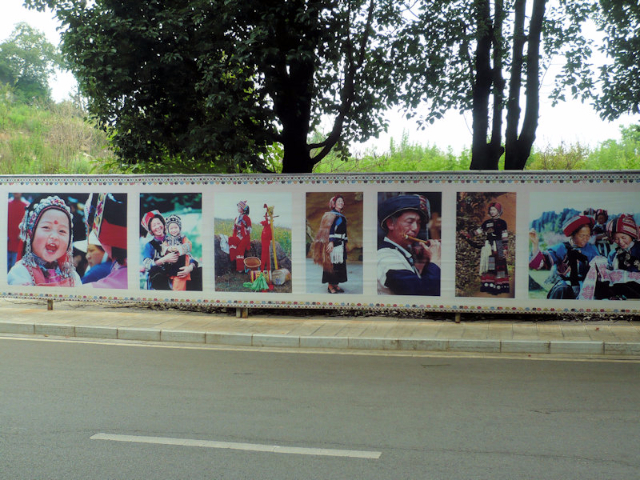 Poster display in honor of ethnic minorities of Yunnan 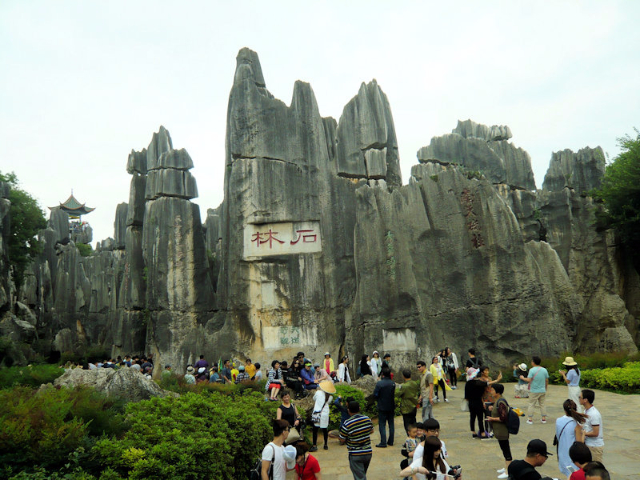 Stone Forest, a most popular tourist attraction in Yunnan 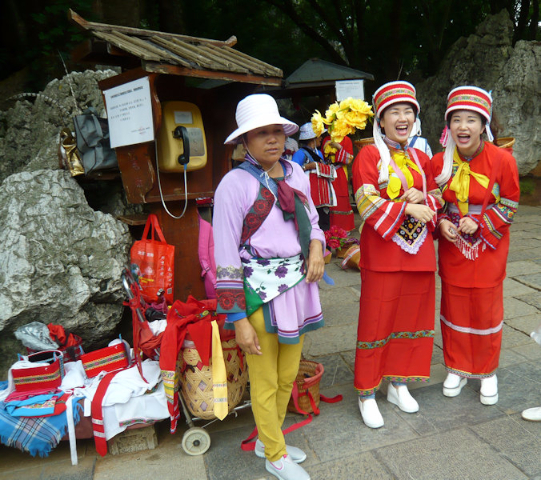 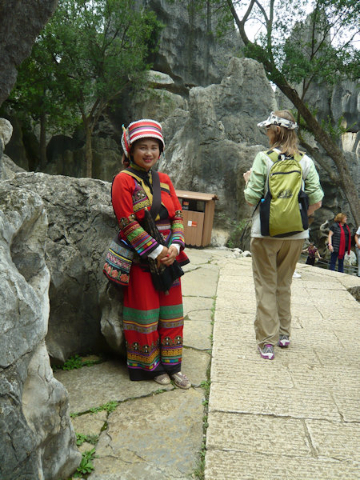 East and West meet in the Stone Forest 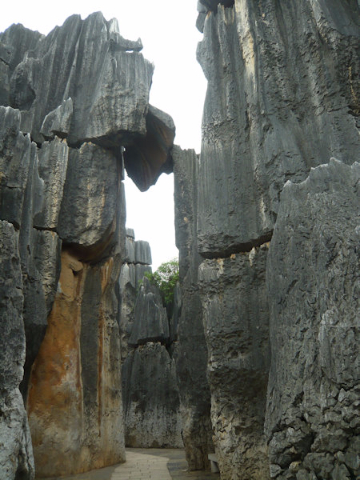 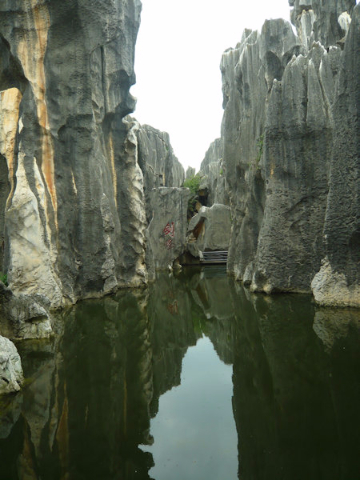 Stone pillars reflect in the water 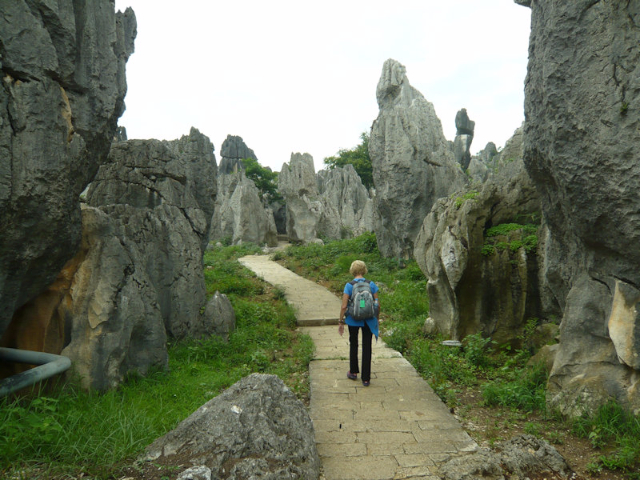 One of many paths through the Stone Forest 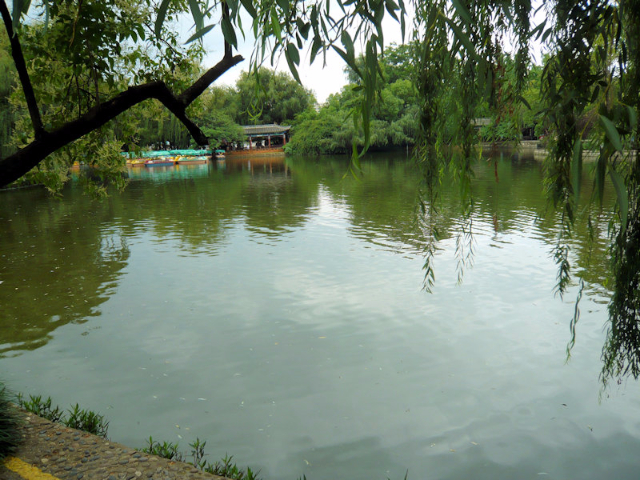 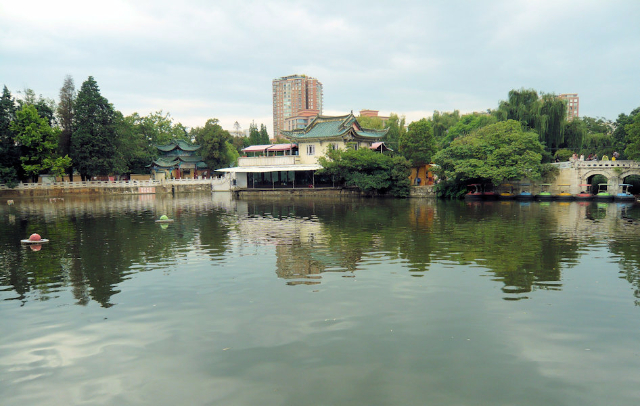 Chinese pavilions and stone bridges add charm to the park 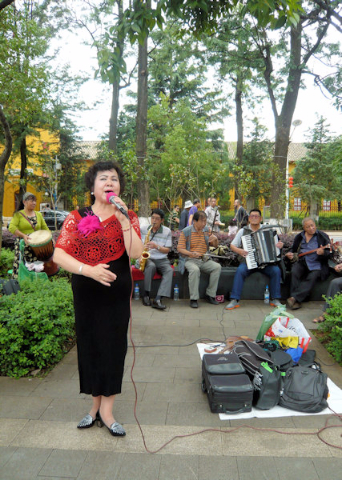 Folk musicians in the park 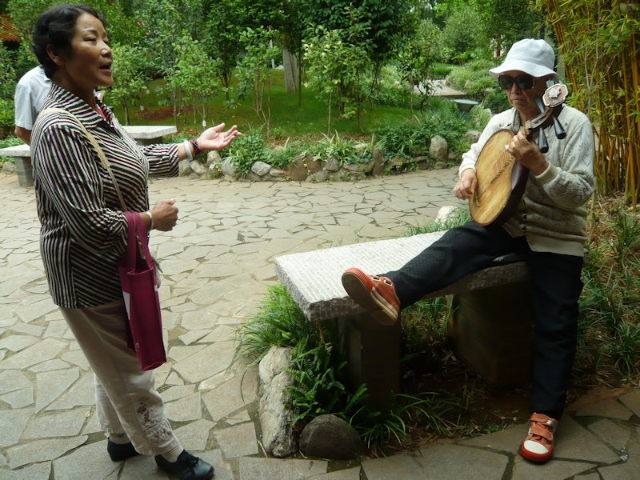 Spontaneous entertainment in the park 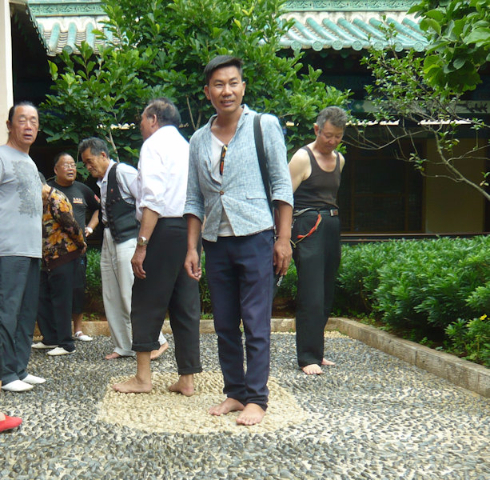 Foot massage in the park 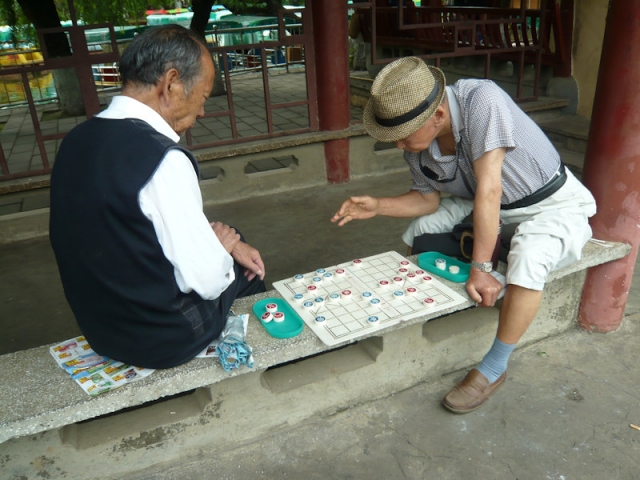 Playing checkers in the park 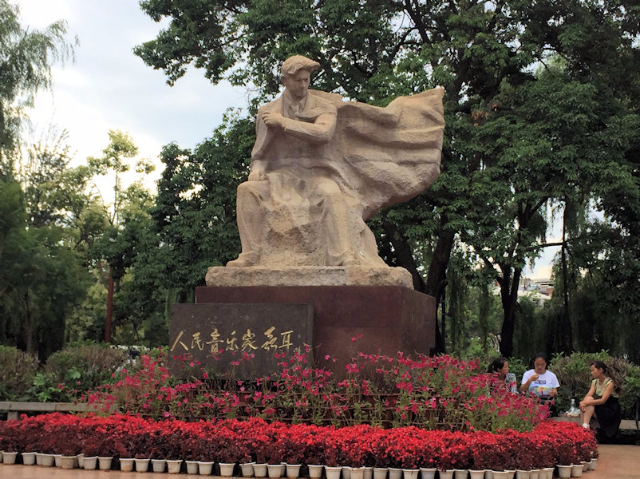 One of many sculptures in the park 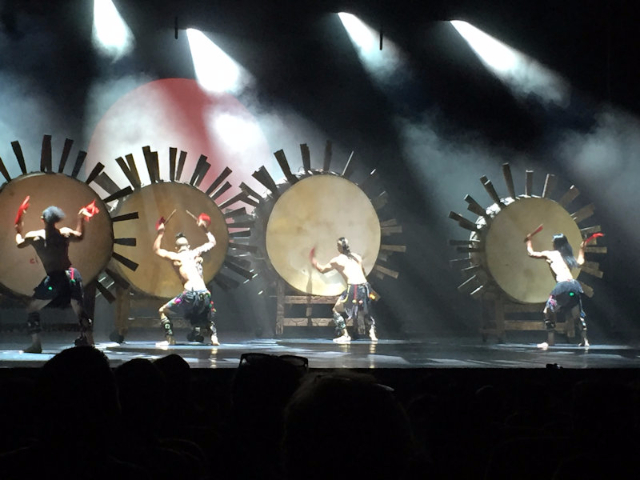 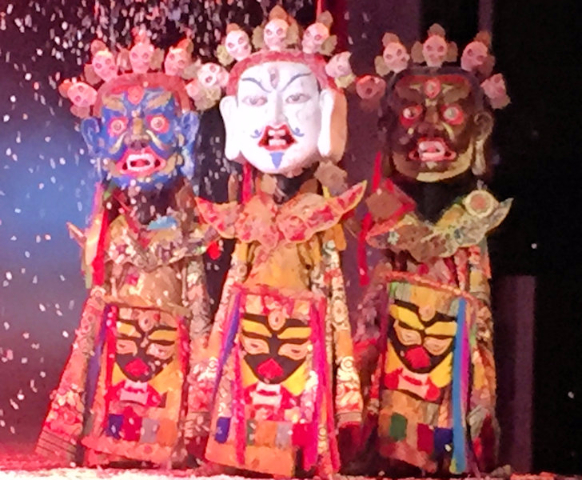 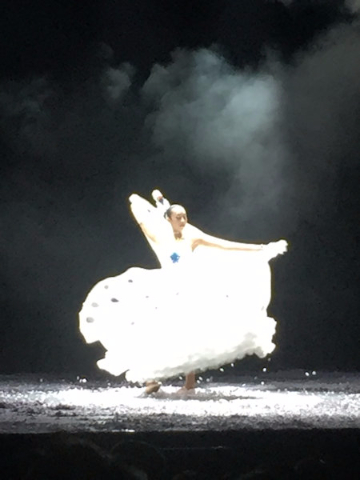 Spirit of the Peacock Dance, Epilogue of Dynamic Yunnan show 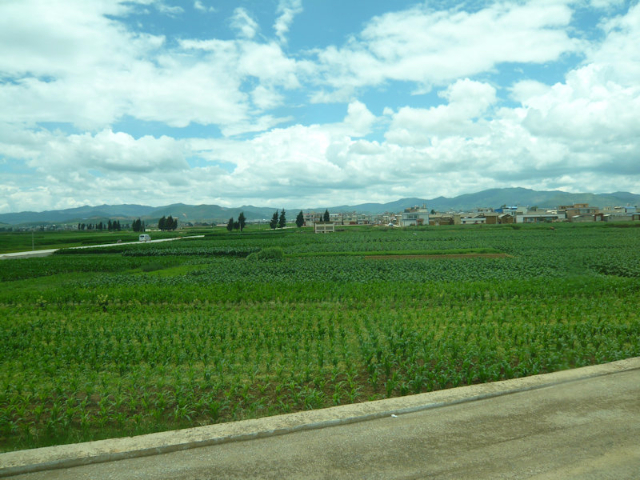 On the road to Dali

My curiosity about unknown lands took me on a month-long journey to Yunnan Province in southwestern China, Mongolia, and Siberia in late June. Following a visit to Istanbul, I flew to Beijing, where I spent two nights with friends before connecting with my fellow travelers who had also signed up for the pre-trip to Yunnan as part of Overseas Adventure Travel’s itinerary to Mongolia and the Gobi Desert.

Besides seeing friends, the highlight of the two days in Beijing was a visit to the National Art Museum of China, which international visitors may visit free of charge upon showing a passport. The exhibitions included works from the museum’s classical collections; nature-inspired paintings by contemporary artists rendered in traditional Chinese style; and a retrospective of work by Yang Zhiguang, who had donated 180 paintings to the museum recently passing away. The paintings, rendered in both Chinese and western techniques, depicted the changes which China had undergone during the artist’s lifetime.

Having visited Beijing in 2005, I was amazed at the visible affluence which had developed since then. The glitz, high-end shops, and fashionable people driving luxury cars in upscale neighborhoods could easily match those of any western capital, even and including such features as congested traffic plus air pollution. In one of the neighborhoods I enjoyed an outing with friends over Peking duck, which arrived complete with the bird’s head on a cart and had been carved at a nearby table. We wrapped the sliced meat in thin pancakes and ate it with a choice of soy or raspberry sauce.

On the day of our departure to Kunming, capital of Yunnan (meaning “South of the Clouds), I arrived at the airport two hours ahead of my 7 am flight and was able to reach the gate with 15 minutes to spare before boarding. Beijing Capital International Airport is vast and crowded. Some in the group arriving from the US either had missed the connection or left without their luggage. Passengers from international flights need extra time for passport and security control; they have to present both an arrival and a departure card and are patted down without exception, then directed to a railway for transfer.

Once we were aloft, all went smoothly during the 3½-hour flight to Kunming. Air China offered a choice of Western breakfast or Asian rice porridge. Upon arrival at the new Kunming airport, China’s third largest, Vivian, our Yunnan trip leader, who was expecting nine people, met the four who arrived, alas only two with luggage. The weather felt pleasantly cool after the heat of Beijing, due to Kunming’s altitude at 6,500 ft.

As we drove to Kunming Hotel, our home for two nights on the city’s main thoroughfare, construction cranes dotted the sky and high-rises everywhere underscored the rise of the new China, in addition to an industrial base of factories, moved here when Japan occupied the eastern coast of China from 1938 to 1945. 8 million of Yunnan’s population of 40 million live in Kunming, surrounded by hills with tea plants. An orientation walk around the hotel revealed quaint shops, including a pharmacy specializing in herbal medicine. A lunch stop at a nearby restaurant featured duck, along with a variety of spicy food similar to the cuisine of neighboring Sichuan province.

Afterwards we enjoyed a tour on foot through the old part of town, which retains its old-fashioned charm and atmosphere. Bronze sculptures located on sidewalks reminded passers-by of common folk – statues of a vendor with his donkey or of a woman selling eggs, and the like. Men squatted around a board game while others watched them play. Storefronts of old buildings displayed enticing colorful merchandise, and some shops showed silk being spun into cloth.

Our day ended with dinner at a traditional restaurant, where different platters of food were placed on a large round revolving glass tray in the center of the table. We helped ourselves to chicken soup; pork with mint leaves; a variety of vegetable dishes such as lotus stems, bamboo shoots, cabbage, and Chinese squash; and sweet corn pancakes for dessert.

In the morning we journeyed to the Stone Forest (Shilin in Chinese), 78 miles east of Kunming. A lake 270 million years ago, the area is now a 200-acre concentration of fantastically shaped karst pillars 15-100 ft. high, formed from the dissolution of soluble rocks by shifts in the earth’s crust and chiseled by rain and erosion. This wonderland is enhanced by the region’s minority groups, who visit it in ethnic costume, with color indicating tribal affiliation.

Despite the large number of visitors, meandering on our own through the paths of what is now a UNESCO Geopark and has been a World Heritage Site since 2007, we were able to find solitude amidst the nature-sculpted rocks, admire their reflections in the surrounding waters, and delight in the manicured flower beds. Following another duck treat and other Chinese delectables at lunch near the park, we returned to Kunming to discover more of its urban attractions.

Green Lake Park, created for the reigning monarch in the 17th century, is now an urban space with ornate boats on the water and bright pavilions on the shores. The grounds, filled with willow trees and ponds with gold fish and lotuses, attract locals for recreation and entertainment. As we walked about, we saw middle-aged women knitting or playing Chinese bridge with four decks of cards, while men played checkers. Some people enjoyed a foot massage as they walked barefoot on polished stones, and others received a forehead massage. Impromptu singing accompanied by folk musicians entertained passers-by with no passing of a hat, and an artist engaged people with an old poem written in calligraphy on the pavement using Chinese brush-painting technique.

An optional tour was a Yunnan cultural performance and dinner, which turned out to be a highlight of the pre-trip for me. Dinner at a traditional restaurant, consisting of twelve different dishes, included soup made with soy milk and the tender shoots of squash, sticky corn, fried pork, lotus flowers, and black mushrooms.

At the Yunnan Art Theater the performance, named Dynamic Yunnan, was a fusion of traditional ethnic folk dance and modern choreography. The region’s rich ethnic tapestry and colorful folk music traditions were presented with great mastery. The showcase in four acts culminated in an epilogue named Spirit of the Peacock, which is a totem for the Dai people and also a symbol of love. The choreographer, who also danced the solo part, beautifully captured the bird’s exquisite graceful movements. I had to pay $25 extra for the privilege of taking photographs during the show, which also allowed me to sit in the front row. This was money well spent!

In the morning, delighted with the diverse geography and cultures of this fascinating region, we left for Dali, an ethnically rich area and one of China’s eight autonomous prefectures, 250 miles west of Kunming.