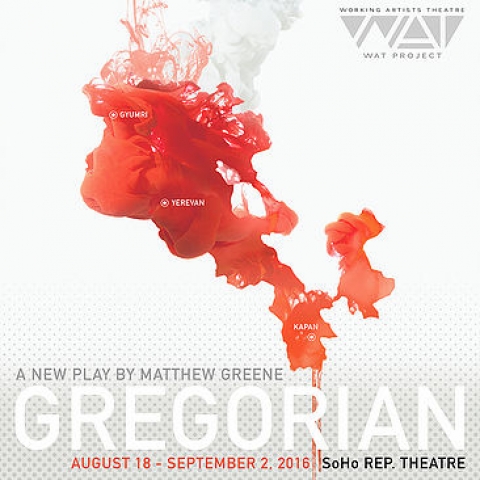 History is long. Memory is short. And much is buried under the rug.

Unearthing the past, Gregorian, Matthew Greene’s latest play, produced by Working Artists Theatre Project at the Walkerspace Theater, digs deep into the painful history of the Armenian people, examining the century long effects of the 1915 genocide on four generations of the Gregorian family,  in which the Ottoman Empire slaughtered 1.5 million Armenians.

Using the family’s story to represent the plight of Armenian people, this 90 minute play with no intermission and five characters is presented in a series of overlapping scenes which take us on an 86 year journey, from Glen Cove, Long Island, to Hollywood, Manhattan, and a refugee camp in Darfur.

The only Gregorian actually seen in the play, the other members are referred to, is lead actor Aaron Lynn who plays all four generations of Gregorian men, each in his twenties. The first Gregorian to make an appearance is genocide escapee 25 year old Bedos newly arrived from Europe with his young son. In the ensuring scenes we meet his Bedos’ son Alex, a fledging writer, his grandson Daniel, an angry young man, and his great grandson, Peter an activist.

The play begins with a one minute scene in which the audience is brought to attention, primed if you will, for what is to come, by the warring sounds of crackling gunfire and exploding bombs, the type of sounds all to familiar to modern day media-watching audiences. The lights go down and up and it is 1915 and we are in the Glen Cove living room of Robert and Gladys Palmer (Heather Lang).

Gladys, is busy coaching Bedos, as well as correcting his English, for a talk he is soon to give about his family’s genocide experiences at a gala to raise money for starving Armenians. We quickly learn that Gladys and her husband, who is away on a business trip, are housing both Bedos and his young son. In the course of her lesson, which also involves having him taste cookies that she just baked, we begin to sense a physical attraction between Gladys and Bedos.

Scene skipping 17 years – it is now 1936 – and we find 22 year old Alex, the son of Bedos, working at MGM. He is deep in conversation with one of studio’s top screenwriters Frances Marion (Margaret Reed). Marion has just read Franz Werfel’s controversial 1933 novel The Forty Days Musa Dagh which brought the Armenian genocide to the attention of the world. Blown away by the story she is intent on bringing it to the big screen. The only problem is that the immensity of story is overwhelming and Marion feels that she needs the help of an Armenian, one who has gone through this experience. Combing the roster of employees at MGM for an Armenian name she finds Alex, a prop boy who wants to be a writer and asks for his help. She tells him, “I need to know how it felt, what it was like.” Though Alex, only two at the time of the genocide, says that he remembers nothing, he agrees to read Werfel’s book.

Another 43 years pass and we find ourselves in a Manhattan hospital with 26 year old Daniel, son of Alex, and his fiancée Janine Baskin (Madeleine Barker) a congressional speech writer. It seems that Daniel, having been kept in the dark about his family’s genocide experiences, is at the hospital there to find out all he can about the past from his dying grandmother. Complicating matters further is his relationship with Baskin who he considers his ex-girlfriend. She seems to want to patch things up but Daniel reminds her that she told him “…to get out of Washington because you didn’t want anything to do with this shell of a man, who newsflash maybe is this kind of person. I don’t know what you came up to New York for but please, do what the lesser mortals do and forget. Move on.”

Jumping to 2005 - feeling very much like today - we are now with Peter, son of Daniel, grandson of Alex, and the great grandson of Bedos, at a Refugee Camp on Darfur. Daniel, a professional activist is in conversation with Sonia Riza (Geri-Nikole Love) a Rwandan genocide refugee, and an activist herself. Raza is there to talk about Peter’s “Woman of Darfur” project in which he interviews victims of the Darfur Genocide and post these videos online. He tells Riza that he “started talking with all of these woman, they were practically mobbing me to tell their stories.”

The reason for Riza’s visit is to stop Peter from posting these videos, as she fears the consequences each victim will face from the Sudanese government for revealing this information. Heated arguments back and forth between Peter and Raza make this a most compelling scene. For here the stakes, still very much in the news today, are spelled out in no uncertain terms. Will harm actually come to these women who are telling horrific tales that the government wants to withhold from the world? Riza believes so. Peter is doubtful. All he wants to do he says “is to tell the truth about what is going on out here.”

With the above four introductory scenes, the template of the story, as well as its characters is established for the audience in the first twenty minutes of the play. What follows in subsequent, attention holding scenes, each nicely unfurling as the play progresses, are well reasoned arguments, surprising revelations, unexpected happenings, a happy event, and a surprise or two.

It is Peter, whose opening speech, delivered before we get to the first scene, that sets the tone of the play. “Where the needle passes, the thread passes also.” It’s a saying they have in Armenia, a saying that I heard from my father. An event that pierces our experience today inevitably leaves a string of consequences behind. We live now in a tangle of threads, a mess we can’t begin to comprehend until we examine the needles of the past. Close to a hundred years have gone by since the annihilation of the Armenian people but their stories remain untold, loose ends dangling from the fabric of history.”

The acting, mostly on a bare stage, was accomplished— meaning the actors, with nobody thinking the play is all about them, served the intention of the playwright beautifully. My one reservation was in the performance of Heather Lang. With a series of poses, and a bit of cavorting here and there, the statuesque Lang, always bathed in flowing frou frou garments, was hard to take seriously, especially given the supposed seriousness of her attachment to Bedos, as well as her intention (need actually) to help Bedos and his people. I found the so-called “butterfly light” and “daffy” choices that she made, albeit some were warranted, out of sync with the earnestness of the rest of the cast. Perhaps given the gravity of the story, Jessica Dermody, the play’s director, felt that a little levity was needed to offset the painful moments. This said, waiting to see what she would do next I couldn’t take my eyes off of Lang. I guess that is a complement of some sort.

Aside from a few slightly confusing scripted distractions – occasionally, a character, sometimes with nothing to say, other times not, would suddenly appear and disappear during a scene in which their prime purpose seemed to be as a reminder that somehow they were still alive, working out their problems, and that we might see them in the next scene – Jessica Dermody’s direction, working hand in hand with Charlie Sutton on movement, was most deft, not an easy task given the split timing the actors needed to smoothly link each scene to the next. Subtly supporting the production with their technical abilities is Jeff Hinchee (Set Design), Tina McCartney (Costume Design) and Michael O’Connor (Lighting Design).

Note: To this date though 29 countries officially recognize the mass killings as genocide, as do most genocide scholars and historians, the Turkish government still refuses to use the word genocide. It labels this atrocity the “Events of 1915” as it is officially referred to by government agencies. “It was an unintended consequence of a complicated war in which many suffered,” Turkey’s current President claimed during his years as Prime Minister. No doubt, with no full apology in sight which is what the Armenians are asking for, he still feels the same.