An Oldie but Goodie 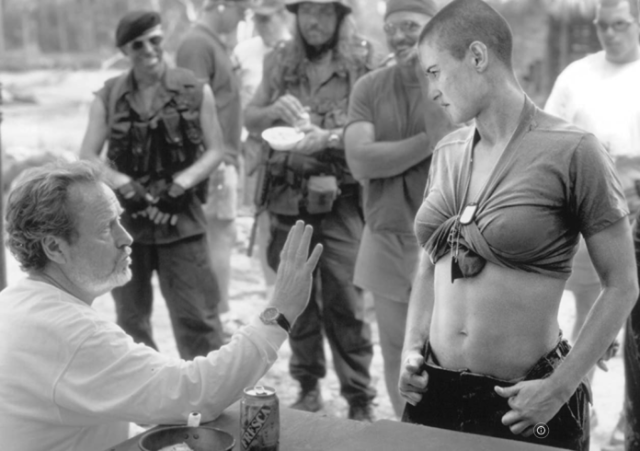 It’s been a little over 100 years since American women received the right to vote.  Throughout history women have always been relegated to second-class citizen status: labelled the weaker of the sexes in almost every aspect of their lives.

Almost all of women’s legal and societal rights have been derived from men be it through marriage or through the largess and compassion of their immediate families.  Frankly, it’s a wonder that they even talk to us at all, considering the way we’ve treated them over the centuries.

When the 1997 movie “G.I. Jane” was released women in Israel were already hardened combat veterans.   In the US. Military, however, women trying to integrate the male dominated ranks of combat soldiers were met with severe resistance from the heads of the armed forces.  “Women will become a distraction and a liability in combat.  Combat requires physical strength as well as stamina to handle the rigors of war and combat”.

Those remarks were the most frequently heard excuses.  Many more like it back in those days, poisoned the well of public opinion of having women being integrated into US combat units alongside men.  Translation: if ‘there is no crying in baseball’, then there is no way women can be in combat roles,  thus safely keeping it an all boy’s run exclusive club.

Practically speaking, very few people on either side of the issue in the movie wanted it to succeed. It was too hot a potato for the politicians and the military to deal with.   They just forgot to tell the selected candidates of trainees who kept grinding away.  The lessons learned during their training period, however, would no doubt, save lives in the future.

In the “G.I. Jane” movie the fictional story takes place at US Navy Seal training facility over a 3 month period where candidates for this super-elite unit must pass the most rigorous and intense combat training regimens in the US military.  The “experiment” of integrating US Navy men and women in combat is the idea of Texas U.S. Senator Lillian De Haven, solidly and puckishly played by Academy Award winning actor Anne Bancroft in a neat little gem of a performance.

The film is also blessed with sensationally powerful performances from Demi Moore and Viggo Mortensen, whose on-screen chemistry in their scenes has the ring of authenticity and the proportions of a “David vs. Goliath” confrontation with Moore being a female David who represents personal integrity in the face of Mortensen’s Navy system of by the numbers Rules and Regs. For him it’s a case  conform or drop out.  Their struggle is mesmerizing in its execution.  No spoiler alerts from me but It’s a movie whose training sequence scenes are almost too real to watch, let alone film.  The cinematography of Hugh Johnson is first-rate in validating my observations and the swift-paced editing by Pietro Scalia keeps the rapt audience glued to the screen.

For the record, however, no female has ever been selected to become a US Navy Seal.  Although we’ve seen this sort of film before i.e, “Private Benjamin”, a light Goldie Hawn comedy set against the backdrop of a female vs. male army life.”  “An Officer and a Gentleman” and “A Few Good Men”, are serious movies that spring to mind. What separates “G.I. Jane” from such plot lines is its laser-like focus on commitment and dedication to get any job or assignment done, and do it as a team. Navy Seals never leave anyone behind on any mission.  That is a core value training order never to be violated.

The film based on a fictional story by Danielle Alexandra, who co-wrote the screenplay with David Twohy, is deftly directed by the acclaimed uber-action movie director Ridley Scott.  He’s the director who scared the wits out of half the world with his space thriller movie “Alien” some 40 years ago that made a star of Sigourney Weaver. He also directed “Gladiator”, with Russell Crowe, and the iconic girl-girl road trip movie “Thelma and Louise”.

It’s the superb direction of Scott that makes the screenplay elements of grit and guts, plus the rough and tumble excesses of high-octane action sequences to the nth degree that make “G.I. Jane”, so compelling to watch.

The film stars Demi Moore as US Navy Lieutenant Jordan O’Neil selected to be the first female chosen for Navy Seal training.  Viggo Mortensen who plays Master Chief John James Urgayle, in charge of the Navy Seal training facility, as a modern day Captain Bligh with a touch of Mr. Hyde of Jekyll and Hyde fame thrown in for good measure.  One can think what they want about past roles Ms. Moore chose to play – which covers a wide range – but one cannot deny her talent and dedication as an actor through the years.  For me, Ms.  Moore is akin to one sampling scotch whiskey for the first time. After a few drinks it becomes an acquired taste and a bond is forever formed.

I remember the daring and the boldness of Katherine Hepburn and Bette Davis in their younger days. They weren’t exactly everybody’s favorite cup tea back then but matured into acting icons as they got the opportunity to extend their reach in the roles they played.  I’ve come to appreciate that stoic look on Ms. Moore’s lovely face in repose, to her steely-in charge stare when cracking orders as she swings into action.  In the world of the stage and television, actor Mary Louise Parker possesses those same character traits and skill sets that allow for her to grow and succeed as well.  Both actors are fierce, unafraid, and creatively ambitious as performers and they’re both a joy to watch.

Viggo Mortensen, as Master Chief, is in charge of all he surveys in the training facility.  Military D.I.’s (short for drill and training instructors) are one step removed from God in military hierarchy thinking.  And woe betide the individual that forgets it.  The excellent cast of supporting characters in “G.I. Jane” make the premise of the story not only moving but a believable exercise of what takes place in the lives of our military men and women.

Military stories are usually favored by men.  But in “G.I. Jane” the ladies have a worthy hero character for whom to root.   “G.I. Jane” the movie has been selected by AMC’s TV channel to stream as their movie of the month for September.  As long as we’re all quarantined at home, it’s the perfect time watch this semi-inspirational movie again. Especially, since the women’s rights movement recently celebrated 100 years of getting the vote on the road to full equality for all women.  I reviewed it on September 4th. Check your local TV listings for date and time of screening.  It’s definitely worth a second look.