A Legend Re-Imagined at Theatre for a New Audience 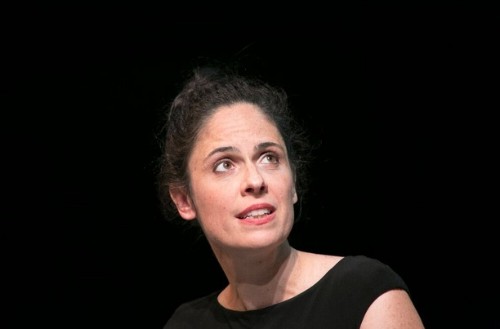 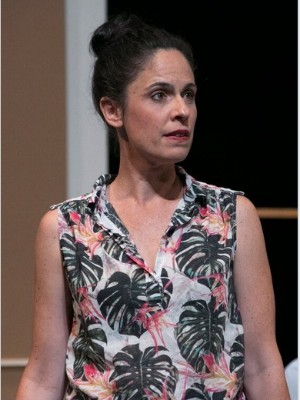 Isolde is an actress who fears she is losing her memory. 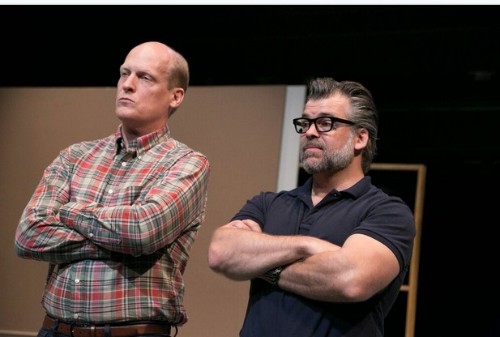 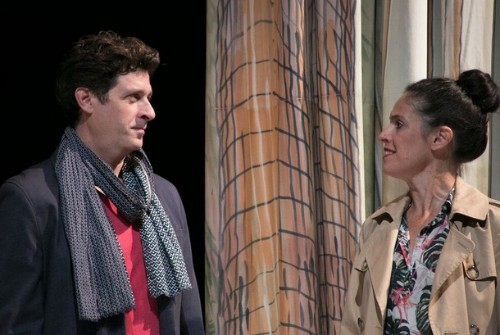 Gary Wilmers as the architect Massismo. Does Isolde fall in love because she has lost her memory, or taken a love potion like her namesake? 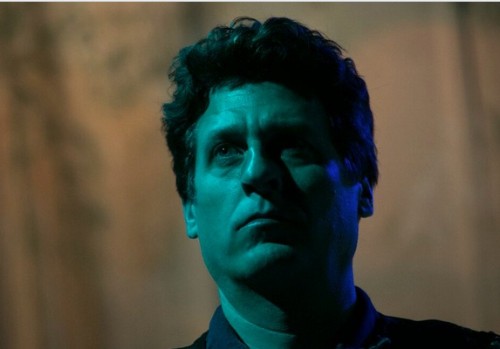 Gary Wilmes, passionate in the 'Tristan' role. A recent Vienna production of the Wagner opera based on the same legend was blue-hued. Maxwell's production occasionally picks up this blue. 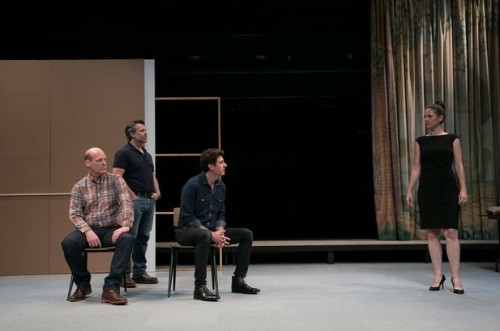 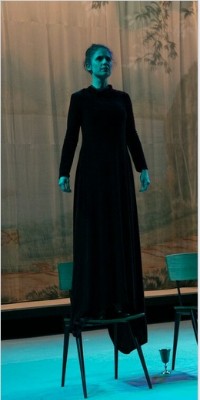 Tory Vasquez, posed like an ill-fated mast-head on a ship. 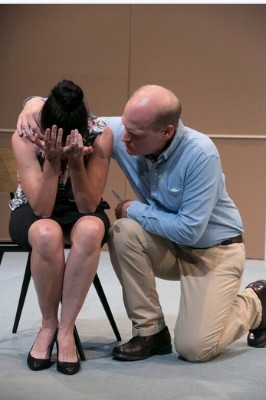 Patrick comforting his distressed wife. Most of Maxwell's direction is in 'neutral', bur occasional moments are highlighted with emotion. 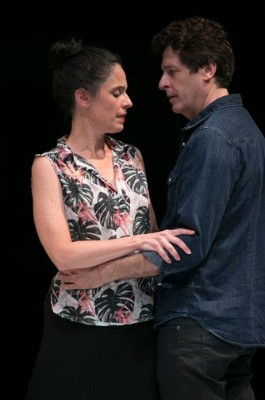 Isolde and Massimo. Does eternal love take us out of time?

Richard Maxwell offers actors daring opportunities to shape and inflect words as though they had just flashed across their minds. We are in a present, present. Even the actors feet as they strike the stage do not anticipate. They are here and now.  While we as audience may not notice this detail, it is one of many movements and actions which hold us in the play's moment.

Words for Maxwell are the only things that count.  From reading to his children, Maxwell has learned that inflection of the voice makes little difference to the listener.  Words can be beautiful, but if they are plainly spoken they will best deliver their tale.  What makes a difference is the story.

Isolde is an actress who fears that her memory is fading.  The playwright has described memorization of lines (and blocking) as the only parts of professional acting over which the performer has any control. Isolde is losing control.  Tory Vasques captures her character's terrifying situation as an unexpected new love enters.

Taking the ancient tale of Tristan and Isolde in Isolde, Maxwell makes an intriguing case for love in the here and now.  Isolde's husband, Jim, adores his wife and would do anything for her, including building a dream house in her favorite spot.  Maxwell is creating a landscape of memory and desire.

Enter the architect, younger than the husband and virile.  He is ready to unleash all his best ideas in the service of his new client.

In Maxwell's inimitable directing style, the actors appear to be in 'neutral' which in fact leaves both them and us hovering in anticipation of what's to come.

The set is an actor too.  Chairs, tables, platforms and windows cut horizontals and verticals across the stage, like a Mondrian painting. These appropriate sets enable action to pass through.

The language like music slides across the striking visual lines.  Nothing is forced.  It seems to cascade, seldom punctuated by high emotion.  When Isolde tells her husband that he doesn't understand the dream house, emotion momentarily escalates. She wants the house because she can have it, not because she needs it.

Maxwell came upon the idea of a love triangle before he read the legend Isolde and absorbed the Wagner opera.

This love triangle seems to move around the perimeter:  Patrick, played with stalwart kindness by Jim Fletcher, loves his wife who falls in love with architect who then reciprocates.  Gary Wilmes almost inadvertently falls into the love affair. Yet, like Tristan, it takes him out of this world and into another.

Maxwell's words are the music in this play. Maxwell has designed his production as a cohesive work.  The brilliant acting is discomfiting but curiously satisfying. The playwright leaves you in what he calls an epic state, wanting more.

An intriguing evening which extends the notion that because we are all broken people, dramatic presentation of angst is both entertaining and healing for the audience.  There is also humor in this fascinating take on legend.