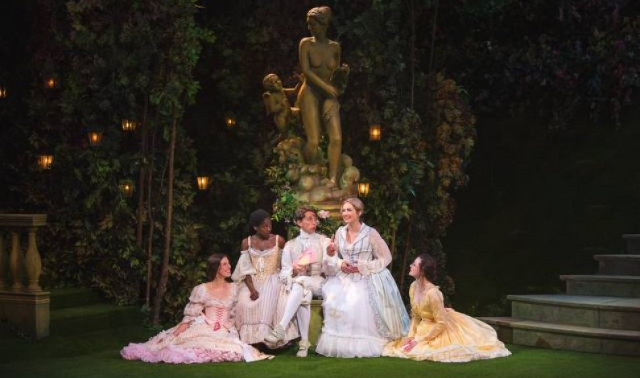 The language of Shakespeare is transformative and universal in its power to elevate or debase in its dramatic form. In its comedy form it is a delight that explores and exposes the folly of humans and their foibles, especially when the influence of that pesky addictive drug called love comes into play (no pun intended).

In Shakespeare’s “Love’s Labor’s Lost”, currently on stage in the Old Globe’s Lowell Davies Outdoor Festival Theatre, the beauty and enjoyment of the production lies in its language and in the execution of the text under the inspired direction of three-time Tony-winner Kathleen Marshall, who makes her Old Globe directing debut with this production.

The tale centers around young King Ferdinand of Navarre (Jonny Orsini) and his three schoolmate lords: Berowne (Kieran Campion), Longaville (Nathan Whitmer) and Dumaine (Amara James Aja), who vow to embrace their studies and not the young ladies at the suggestion of Ferdinand who requests that he and his lords take an oath to forego all amorous entanglements for three years. But the minute they take the vow and sign the pledge, the Princess of France arrives with her three beautiful attendants. All bets, oaths, and agreements, naturally are now forgotten and off.

Never doubt the power of love when it’s fortified by hefty doses of raging hormones. In that battle the hormones always win. Once in court, as bees to honey, the inevitable courting begins, despite the King’s reminding them of the oath that had each signed. When all meet for the first time natural attractions and selections take over including King Ferdinand for the Princess (Kristen Connolly), Rosaline (Pascale Armand), Maria (Amy Blackman, and Katherine (Talley Beth Desai).

Period comedy is a study in the persuasiveness of romantic love versus the strengths of attraction and hormones. It’s not rocket science to figure out which force usually wins. Actually, they both do.

There are some wonderful supporting-role performances in this production, but with a cast of twenty-two artists, space can’t accommodate listing them all. That being said, however, there are always standouts and they include: Triney Sandoval as the braggart Don Adriano de Amado in a nice high energy comic turn, Greg Hildreth as the sly clown Costard, the possessor of great comedy timing who is an in-the-moment actor, and Makha Mthembu as Jaquenetta the dairy maid girl friend of Costard livens the fleeting on stage comedy moments, and Kevin Cahoon as Boyet, the Princess’ gatekeeper/courtier and Patrick Kerr as the curate Sir Nathaniel both know how to milk a scene for maximum effect. Its great stuff and good fun.

Director Marshall nicely controls the on stage silliness that frothy, light Shakespearean rom-coms deliver to audiences while at the same time providing the actors the opportunity to enjoy themselves. When they have a good time we have a good time.

He leads a creative team that has brought their A-Team skill sets to the production. Scenic Designer John Lee Beatty delivers a stunning set design that dominates the stage allowing the actors to perform their magic under a mood-inducing Lighting Design by Jason Lyons (no relation), which allow the beautiful costume designs of Michael Krass to be seen and fully appreciated. The Sound design by Sten Severson along with original music by Peter Golub,is under the baton of musical director Taylor Peckham, also are first rate.

“Love’s Labor’s Lost” is a splendid production to enjoy under the stars in the Globe’s Outdoor Festival Theatre.   The play performs through September 18, 2016.