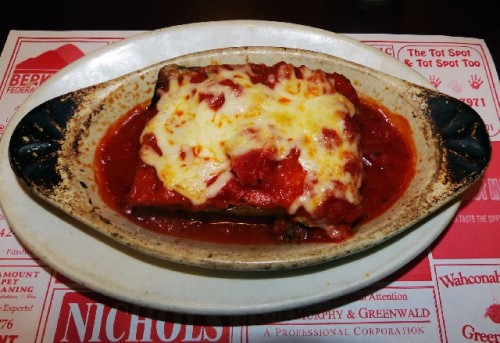 The small portion of Moussaka was hot and flavorful. 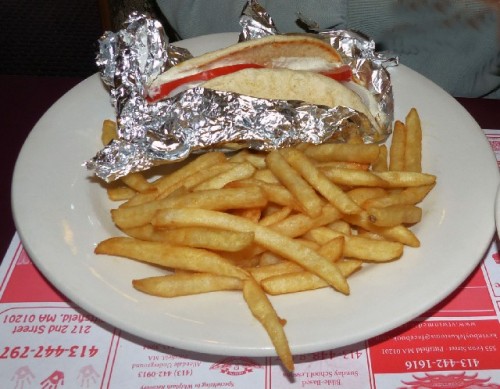 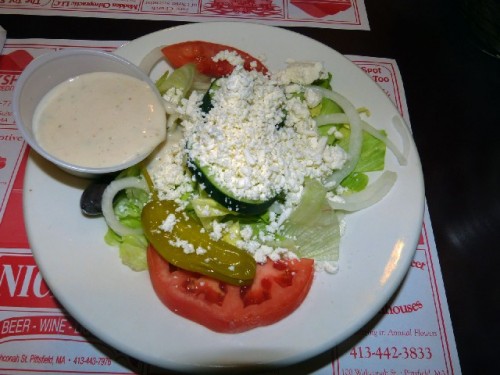 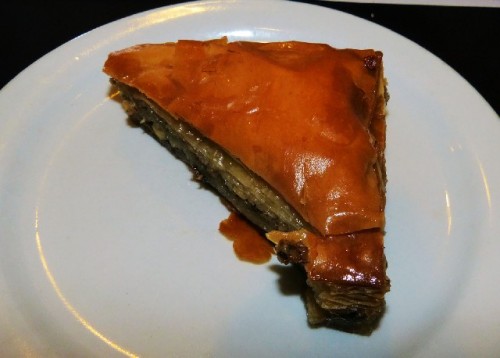 Located near the hospital in Pittsfield, Paul’s Restaurant, with family style Greek cuisine is a popular destination for patients, staff and seniors.

There is an enticing combination of home cooked Greek standards at affordable prices. Most of the dinners on the menu were under ten dollars with a few daily seafood specials in the $12.95 range.

Of course you get what you pay for.

The décor is generic and hardly enticing for a romantic rendezvous.

Mostly this is a straight up lunch and dinner destination.

For Cisco the true test of a Greek restaurant is its Moussaka ($8.99).

Pancho later revealed that he should have ordered the Moussaka but for variety and tasting options he ordered the Gyro Dinner ($8.99).

Talking with the friendly waitress, who runs the restaurant with her mother in the kitchen, we asked for a small Greek salad  ($5.95).

She advised us that with rolls a small salad came with our meals.

For just $1.25 the small Greek salad was upgraded to our dinners.

It was an excellent move as the salad was fresh, came with a generous amount of crumbled feta cheese, and a nice Greek dressing. Keep that in mind if you visit.

The Moussaka came piping hot in a small casserole dish. It was fresh and tasty if a bit small. Most of the time the dish comes piled higher with ingredients including eggplant, potatoes  (barely visible if at all), seasoned ground beef, grated cheese, Béchamel sauce, and Mozzarella cheese.

Overall it was fresh, hot and nicely seasoned.

But with just a side salad and a roll it was less than a complete meal with no additional starch. The norm is that Moussaka comes with rice and a tomato sauce or French fries. Considering that rice does not significantly add to the cost of a meal it was odd and disappointing that it was not included. The menu indicates that this is also true for the traditional Pastitsio ($8.99).

The Gyro Dinner ($8.99) did come with fries. The lamb with tomatoes, onions and Traziki sauce was served rolled in grilled pita bread wrapped in tin foil.

Pancho, who is fond of Gyro from years in New York, found this preparation disappointing and lacking sufficient meat and ingredients.

“For the price it seemed like a lot of money for a not that great sandwich,” he said.

Asking about desert there were several options including Baklava ($3.95).

We were assured that it was home made.

The portion was generous but beyond that disappointing.

An essential for a good baklava is a flaky, filo dough. Here it was flat and the dessert overall felt dense and compressed. One could taste the crushed walnuts but there was not enough honey or syrup. I would not order it again.

We concluded that we would return and sample other Greek and seafood items.

But more in line with when being in the neighborhood, or for an appointment at the hospital. It is not a restaurant one would go out of their way to revisit other than for a casual, affordable meal.