When She Had Wings 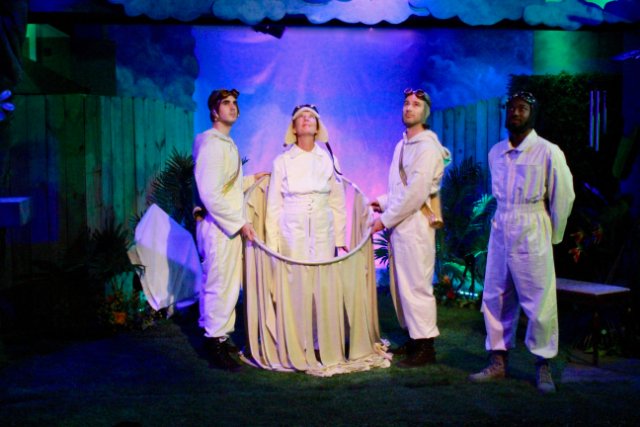 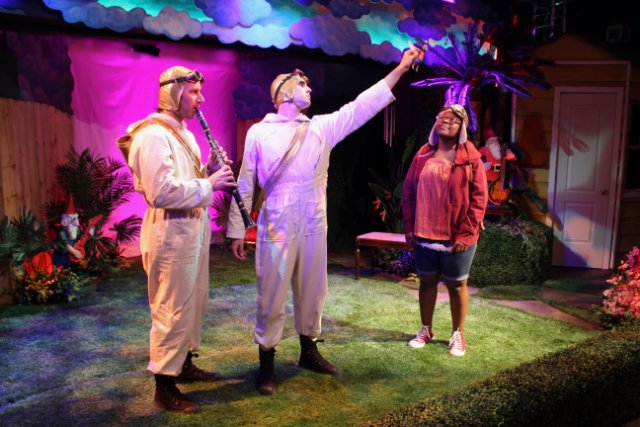 If you listen closely, you’ll hear what sounds like the opening notes to the Stephen Sondheim classic, “Send in the Clowns” as part of the music to Theatre Lab’s magical production of When She Had Wings.

And yet, it’s fitting in more than one way.

For instance, the young girl in Suzan Zeder’s family-oriented fantasia yearns to fly, like she did before she learned to walk. To paraphrase Sondheim’s lyrics, surely it would be rich for the youngster to be able to spread her wings and lift off.

Further, the young girl, who likes to be called simply “B,” and the other major character make up quite a pair.

In particular, “B” is literally and metaphorically on the ground. She desires release, into at least mid-air.

Meanwhile, the enigmatic other character may need to land ASAP. Or, depending on whom you think she (or it?) is – and it’s open to interpretation — she just may need someone some grounding, so to speak.

Theatre Lab’s production of When She Had Wings, which runs, or rather flies, through Sept. 29, is A Heckscher Theatre for Families production. This series serves as a major part of the FAU-based  professional theater company’s educational outreach program.

The play, and the series, is “designed to offer everyone, from ages 8-80, the opportunity to engage their imaginations and re-examine the world around them through a lens of wonder and joy.”

Certainly, there are aspects of this play that will appeal to children. Consider: “B” is a 9-year-old who, like we said, wants to fly. And many children who may attend the production will likely relate. In addition, part of scenic designer Michael McClain’s picturesque, spacious green landscape dotted with foliage includes hilariously-attired garden gnomes. As you look at these mini-Santa-like figures, you may feel like a child in a Christmas shop.

But while When She Had Wings is part child-appealing fantasy, it’s also an enlightening experience about flight and history. In addition, the play is a funny family tale and one about female empowerment – so timely, with the #MeToo movement in full force.

Credit Zeder, a nationally and internationally-recognized playwright specializing in family-oriented theater, for not merely lecturing to us. Rather, she mixes whimsy, charm, magic, music, movement, imagination and sound while offering a fun, thoughtful and engrossing educational experience.

Like Sondheim’s Into the Woods, When She Had Wings begins with the aura of a simple children’s story.

But as the play progresses, Zeder’s adds layers of meaning in regards to flying. In the play, it amounts to more than soaring through the air. For example, flight becomes a metaphor for freedom, unshackling yourself from constraints that keep you from following your dreams and desires.   Also, if you “crash” or fail, you just get right back up and attempt to soar once more.

“B” or Beatrix as her father often calls her, clearly remembers that before she could walk, she could fly. However, she has forgotten how.

To raise the dramatic stakes, “B” must re-learn how to fly before she turns 10. It’s a dreaded milestone for the girl, who’s not looking forward to turning double digits. This is another example of how When She Had Wings isn’t your typical children’s story. Indeed, few, if any, children dread birthdays.

For “B,” flying means freedom from, for instance, her “helicopter” father. While he’s joyful and seems to love life (and his daughter), he hovers over her in a loving, yet annoying way. It’s enough to make “B” roll her eyes and sulk, like a teenager who cannot believe her parents insist on watching her every move.

The latter is that mysterious human (or is she/it a human?), who needs someone to perhaps ground her in reality. Or, does she need to literally land on the ground with her life at stake?

“A” may very well hold the key to “B’s” ability to re-launch herself into the air.

Plays that are open to interpretation are often fascinating. While audiences are always an integral component to storytelling in theater, plays with unanswered questions and possibilities further empower audience members in the tale’s telling.

And so, while watching this play, and after the curtain closes, we wonder: Is “A” a senile patient in a senior home who has, perhaps, suffered a stroke and can no longer speak in full sentences? Or is “A” Amelia Earhart, the first female aviator to fly solo across the Atlantic Ocean? If the latter is true, what happened to her ability to speak in full sentences? Indeed, among the few things she can say are Earhart’s “call letters” – KHAQQ. For that matter, what is she doing in “B’s” yard in Florida? Another possibility: Is “A” some senile patient who thinks she’s Earhart?

To be sure, “A” and “B” are major characters. But just as important are “Wingman” and Sound Op.” They provide part of the play’s sound and movement. These elements add immeasurably to the mood and atmosphere of the play. In addition, they provide proof that theatrical magic doesn’t have to remain invisible to the audience in order to captivate them.

For instance, in clear view, we witness Sound Op playing a kazoo and transforming that sound into one of an airplane engine sparking to life. Meanwhile, Wingman guides an invisible plane, through miming action. Recorded sound suggests a plane zooming over our heads. No doubt, it sounds authentic.

At least one of these two characters also strums a stringed instrument, creating moods ranging from celebratory to mysterious, peaceful and whimsical. Meanwhile, Wingman’s movement is playful and dramatic. It reinforces those qualities in Zeder’s storytelling. Realistic thunder claps and lightning combine with other sounds and movement to propel the story forward, as well as to enhance mood.

Wingman (Daniel Llaca) and Paul Curtis (Sound Op, composer) are both energetic performers. In particular, they add vitality and magic to this production. Surely, it wouldn’t be the same without sound and movement.

But there’s another question for audiences to ponder: What role, in the story, do Wingman and Sound Op play in “A” and B’s” lives? For example, are they real or figments of their imagination?

Speaking of these characters, the actors who play them mostly shine. Stephon Duncan’s wide-eyed “B” is full of wonder, precociousness playfulness and charisma. That is, when she’s not sulking and casting an annoyed glance at her dad when he’s little more than a helicopter parent. Duncan, an adult actor, doesn’t speak in a child-like voice. Nor does she position her body to appear like a child. That’s just fine – we can use our imagination.

As “A,” Barbara Sloan, with bird-like strands in her hair, widens her eyes in bewilderment and wonder. It’s as though this creature or human is taking in the world’s sights for the first time. Together, the two characters touchingly bond.

Meanwhile, Roderick Randle plays “A’s” father with an authentic air of joviality. The actor is also credibly stern when he tries to make his daughter obey him.

Randle also plays a representative of a nursing home-like facility. Unfortunately, his portrayal of this role veers too far into caricature and isn’t credible.

But negatives aside, there’s plenty to enjoy in this production, including lighting designer Thomas M. Sharrock’s varied palette, reinforcing this colorful story, to McClain’s serene, picturesque green set. It surely looks like a spring or summer day in Florida.

In the play, the setting is Nebraska. However, director Stabile, whose staging is inventive and pacing varied enough to keep our interest, has moved the action to the Sunshine State

Surely, regardless of your age, this visually appealing, refreshing tale will put you in a sunny mood.