The Mettawee Theater Company at St. John the Divine 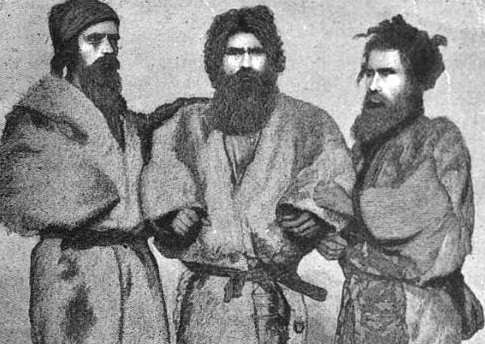 The aborigines photographed in 1902 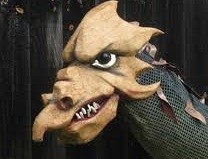 A dragon who gets outsmarted by people 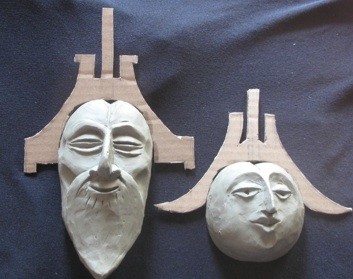 Masks of an Ainu man and woman 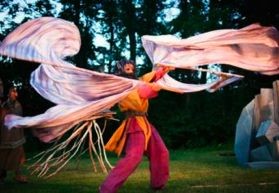 Performing in a garden


Songs of the Ainu aborigines of northern Japan were sung, danced, and acted in the Bishop‘s garden of the Cathedral of St. John the Divine.  The polytheist Ainu worshiped Gods by facing east.  The Cathedral faces west, but the corner into which the garden is tucked welcomes all forms of worship, and particularly the worshipful appreciation of nature and its treasures.  Ralph Lee, the director and designer of fantastic masks and puppets, remarks, “These epic tales reflect a deep respect for nature and the belief that there are spirits in all things, both living and inanimate.”  Humans, gods and nature interact in charming vignettes.

What immediately catches the eye are the incredible masks and puppets created by Lee, who is committed to bringing live theater to odd nooks and crannies of the universe.   In the humanistic spirit  of the tales he tells from different cultures, Lee’s method is a delicious mix of dance, song, talk and music and captivates a wide-ranging audience.  Many children, including young Ms. Annabelle sitting on my lap, were riveted on the proceedings throughout the evening.

And who wouldn’t be.  This year traditional tales from the Ainu remind us of peoples who lived in tune with the world around them.  Today these aborigines, after a land grab by their neighbors from the south,  have been integrated into modern Japanese culture.  Much of their tradition has fortunately been preserved.

Three tales were spun out this evening.  A delightful dragon meets an unfortunate end when a particularly delectable fish tempts him.  A young boy fells a giant fish and a giant tree tells what it feels like to be transformed into a sailing vessel.

Neal Kirkwood composed evocative accompanying music, which was performed with gusto by Matt Donello. Choreography often has the beat of a moving bird as backs bend forward and far back.

The Mettawee River Theater Company, which was founded in 1975, uses folklore from cultures around the world to create stories which use masks, giant figures, puppets and other surprising elements.  The company’s mission is to bring live theater to people who ordinarily don’t have access to it.

It is fun to be tucked away in this beautiful land of the Ainu as you stretch out in the gardens of St. John the Divine.   This evening of story telling by Ralph Lee happens also in the Berkshires every summer, in Pittsfield, North Adams, and nearby North Bennington.  Watch for the Mettawee River troop.  They are wonderful.