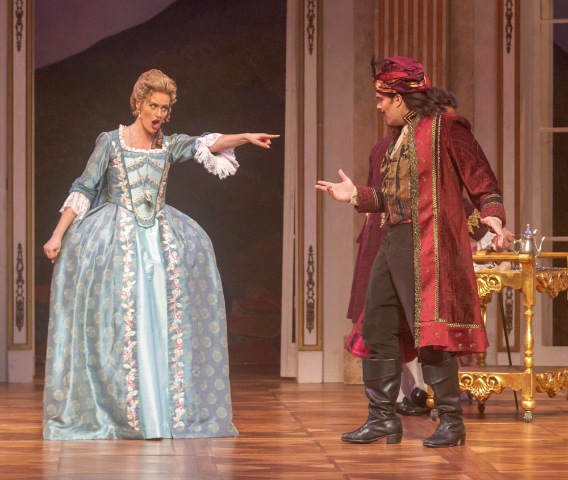 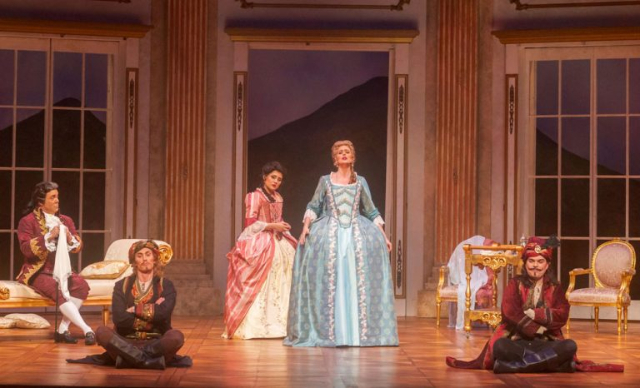 The cast. All photos by Robert Shomler 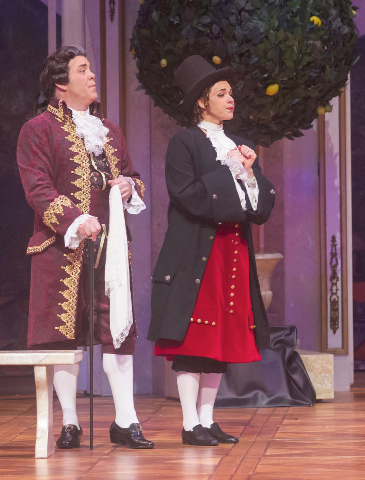 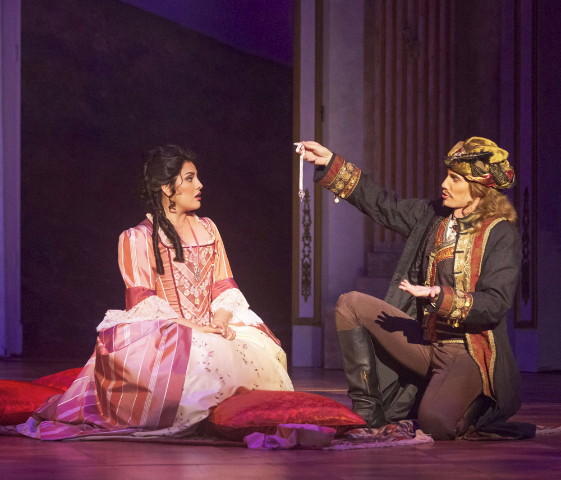 Opera San Jose opened its 34th season with a handsome production of Wolfgang Amadeus Mozart’s popular opera buffa, Cosi Fan Tutte. A winsome cast of strong singers with fine acting chops yields a highly entertaining outcome. The music is classic Mozart at the very end of his brief but brilliant life, full of beautiful, melodic music. The libretto comes from original material by Lorenzo da Ponte, but its inspiration may have come from Boccaccio or the comedies of Shakespeare, as it shares common devices of altered identities, love couples switched, and the theme of fidelity.

The very title of the opera prompts discussion. Literally, it translates from the Italian as “thus do all,” with the implied word “women” appended. In many countries, opera companies routinely translate opera titles, if not whole libretti, into local language. Because of the interpretive nature of the title, cognoscenti will observe that Cosi has appeared under more different names with more different implications than any opera in the repertory.

The storyline is quite simple. Soldiers Ferrando and Guglielmo declare the fidelity of their betrothed to the cynical Don Alfonso, who challenges them with a wager to participate in a ruse that he is certain would disabuse them of their naiveté. It is worth noting that a double standard applies here, as soldiers expect to have dalliances with impunity. To test the constancy, the young men are to tell their fiancees, sisters Fiordiligi and Dorabella, that they must depart for an emergency troop mobilization. Having justified their absence, they return disguised as Albanian gentlemen. Like other plays with disguised identities, an extra soupçon of “suspension of disbelief” is necessary to go along with the notion that the deceit could actually work. Of course, they tempt the young ladies with the further assistance of the sisters’ clever and mischievous maid, Despina. Complications and accusations ensue.

The cast assembled for the production is noteworthy for the overall high quality of the voices as well as their equality and complementarity. With little exception, the sound of the six principals is lyric and highly balanced. If one voice stands out, it would be Malcolm MacKenzie, as Alfonso, who delivers mellow yet penetrating baritone timbre with seeming ease.

The score overflows with ensembles of various sizes, which in this production takes advantage of the well matched voices. Some arias stand out as well. David Blalock, as Ferrando, caresses the beautiful “Un aura amarosa” about the absorbing atmosphere of love. As Fiordiligi, Amanda Kingston proclaims her fidelity scaling the challenging “Come scoglio” with its great range and leaps – both high to low and low to high. Colin Ramsey as Guglielmo, Cassandra Zoé Velasco as Dorabella, and Maria Valdes as Despina are also equal to the task.

But Cosi requires support elements to succeed. In this case, the acting of the players matches their singing. In particular, they handle the many comic moments well. The staging is highly effective, dominated by an arced wall with five portals. The features of the wall, including columns and decorative elements are compatible with the framing of the stage, creating the sense of a larger canvas.

For its great popularity and highly listenable music, Cosi Fan Tutte is not without weaknesses. It was Mozart’s third collaboration with librettist Lorenzo da Ponte. However, unlike the earlier Don Giovanni and Marriage of Figaro, it lacks the signature moments that would belong in the “Greatest Hits of Mozart” and send the audience home humming it tunes. Its recitatives are accompanied by repetitive and uncreative harpsichord arpeggios and punctuations, which adds to its static sense.

Structurally, the opera lacks stimulation. Although scenes occur in several locations, the use of a single set (albeit with changing props) yields an unvaried look and no sense of being transported. In effect, with a cast constituted of only the six principals as an ensemble, the feel is more of a chamber piece than a grand opera. Symmetry abounds as the two men have a male accomplice, and the two women have a female accomplice. And because the singing time is spread fairly evenly among the players, tit-for-tat numbers occur frequently. A love duet by one couple follows a love duet by the other. An aria by the tenor is followed by one from the soprano. And so on. Yet, for whatever faults, Cosi deserves its status, and this production shows it well.

Courtesy of For All Events and Victor Cordell.