From Avengers to Game of Thrones 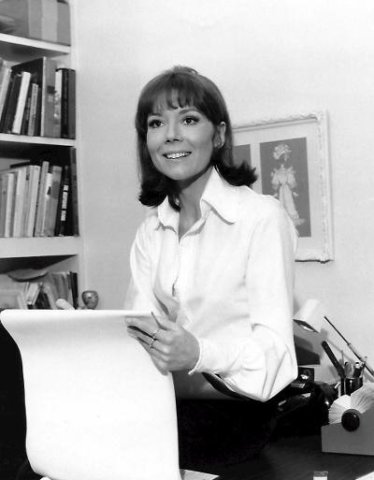 Actress Dame Diana Rigg, a renowned English performer who played roles such as Emma Peel in The Avengers and Olenna Tyrell in Game of Thrones, has died at age 82.  In addition to these roles, the late stage and screen actress  (July 20, 1938-Sept. 10, 2020) portrayed James Bond's wife in the 1969 film On Her Majesty's secret Service.

Rigg also performed live theater, in such roles as Medea in London and New York. For her work as that character, Rigg won the 1994 Tony Award for Best Actress in a Play.

Her professional stage debut came in 1957 in the The Caucasian Chalk Circle, a play by the German modernist playwright Bertolt Brecht. Following her work in Brecht's piece, Rigg joined the Royal Shakespeare Company (RSC) in 1959. While with the RSC, Rigg took on numerous roles. They include Adriana in A Comedy of Errors, Helena in A Midsummer Night's Dream, and Cordelia in King Lear, and Viola in Twelfth Night. Speaking of King Lear, Rigg portrayed Reagan in a 1983 TV movie, which starred Laurence Olivier as the titular character. In 1971, Rigg made her Broadway debut in the 1971 production of Abelard & Heloise. Rigg earned the first of three Tony Award nominations for Best Actress for he role in that play. Her second Tony Award nomination came in 1975 for The Misanthrope, or the Cantankerous Lover,  a 17th-century comedy of manners written in verse by Moliere. Rigg's third Tony nomination came in 2018 for her work as Henry Higgins mother in a Broadway revival of My Fair Lady. In addition, Rigg won and received nominations for a slew of stage performances.

From 1972 to 1975, Rigg was a member of the National Theatre Company at the Old Vic. She took on leading roles in premiere productions of two Tom Stoppard plays. Specifically, she played Dorothy Moore in Jumpers (National Theatre, 1972), Ruth Carson in Night and Day (Phoenix Theatre, 1978).

In 1982, Rigg appeared in the Tom Jones and Harvey Schmidt-penned musical, Colette, based on the life of the French writer. However, the production closed during  an American tour en route to Broadway. In 1985, Rigg appeared in the Lyric Theatre's production of Little Eyolf. That same year, Rigg appeared as Cleopatra in Antony and Cleopatra for the Chichester Festival Theatre. Two years later, in 1987, Rigg took a leading role in the West End production of Stephen Sondheim's Follies. Then, in the 1990's, the performer triumphed with roles at the Almeida Theatre in Islington. Also in England, Rigg performed in shows such as Mother Courage at the National Theatre in 1995, and Who's Afraid of Virginia Woolf? at the Almedia Theatre in 1996. That production later transferred to the Aldwych Theatre.

In 2004, Rigg appeared as Violet Venable in Sheffield Theatres' production of Tennessee William's play Suddenly Last Summer. That production later transferred to the Albery Theatre. In 2006, Rigg appeared in the drama Honour at the Wyndham's Theatre in London's West End. The production experienced a limited but successful run. In 2007, Rigg portrayed Huma Rojo in the Old Vic's production of All About My Mother. Samuel Adamson adapted the piece for the stage. He based it on the film of the same title, directed by Pedro Almodovar.

The year 2008 saw Rigg appear in Chekhov's The Cherry Orchard at the Chinchester Festival Theatre. She returned there in 2009 to star in Noel Coward's Hay Fever. In 2011, Riggs portrayed Mrs. Higgins in the play Pygmalion, the source material for My Fair Lady. Speaking of that musical, she played Eliza Doolittle 37 years earlier at the Albery Theatre.

In February 2018, Rigg returned to Broadway in the non-singing role of Mrs. Higgins in My Fair Lady. "When I was offered Mrs. Higgins, I thought it just such a lovely idea," she commented at the time.

In addition to her perhaps more well-known screen roles, Rigg played Helena in A Midsummer Night's Dream on the big screen in 1968. Also, she portrayed Lady Holiday in 1981's The Great Muppet Caper, and Arlena Marshall in 1982's Evil Under the Sun. Rigg won the BAFTA TV Award for Best Actress for the BBC miniseries Mother Love in 1989, and an Emmy Award for her work as Mrs. Danvers in an adaptation of Rebecca in 1997. Rigg also received an Emmy nomination for her work in CBS' In This House of Brede. She also won a Bafta special award in 2000 for The Avengers, shared with the series' other stars Honor Blackman, Joanna Lumley and Linda Thorson. In all, Rigg received nine primetime Emmy nominations. Also, Rigg won The British Academy Television Awward for Best Actress as Helena in Mother Love, a four-part British TV drama. It aired from Oct. 29 to Nov. 19 of 1989. Other television credits include the titular character in the 1981 TV movie Hedda Gabler, You, Me, and the Apocalypse (2015), Detectorists (2015), Little Eyolf, Bleak House, and the Doctor Who episode "The Crimson Horror" (2013) with her daughter, Rachael Stirling.

Rigg was born in what is now South Yorkshire in 1938.  Her father, Louis, was a railway engineer born in Yorkshire. Between the ages of two months and eight years, Rigg lived in India. There, her father worked as a railway executive in the Bikaner State Railway. She spoke Hindi as her second language in those years. Rigg trained as an actress at the Royal Academy of Dramatic Art from 1955 to 1957. She was made a CBE in 1988 and a Dame in 1994 for services to Drama. Both titles are British orders of chivalry, rewarding contributions to the arts and sciences, work with charitable and welfare organizations, and public service outside the civil service.

English broadcaster, journalist, and author Michael Parkinson first interviewed Rigg in 1972. He described her as the most desirable woman he ever met and who "radiated a lustrous beauty."

Rigg died at home in London on Friday, Sept. 10, at age 82. Her daughter, Rachael Stirling, said her mother succumbed to cancer, with which Rigg had been diagnosed in March.