Don’t Give a Crap 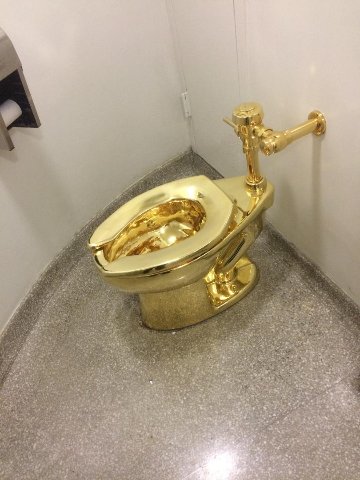 For the rich and famous, in palaces of royals and drug lords, the ultimate luxury is to sit on a golden throne.

The artist Maurizio Cattelan has been only too eager to provide a suitable commode.

At the Guggenheim Museum I waited on line for the golden opportunity to take a piss in his sculpture “America.” There was an uncanny pleasure to what I considered to be a solitary example of performance art. It was worth bragging rights shared here.

Now it appears that the infamous crapper has gone missing.

It has been a media signifier of the outrageous excess of contemporary art.

The exotic, functional plumbing fixture was installed at Blenheim Palace in the U.K. It’s the cottage of the Duke of Marlborough in Woodstock, Oxfordshire. Surely the Duke is really pissed off at the loss.

Down at the pub, no doubt, the locals are crying in their beer.

With naive noblesse oblige the Duke’s brother, Lord Edward Spencer-Churchill, stated that he had no special security plans to guard the object valued at £1m. If unprotected the insurance company no doubt will balk at settling a claim. So these aristocrats appear be out a bundle. FUBAR.

As an art object the crapper would be hard to fence. It’s too well known.

But all too easy to melt down and sell off at market value.

You might say that the stolen art is likely to be composted.

This is surely a new and creative approach to the gold standard.

“It’s not going to be the easiest thing to nick,” his Lordship told The Sunday Times  “Firstly it’s plumbed in and secondly a potential thief will have no idea who last used the toilet or what they ate. So no, I don’t plan on guarding it.”

File under famous last words. Not that I really give a ….