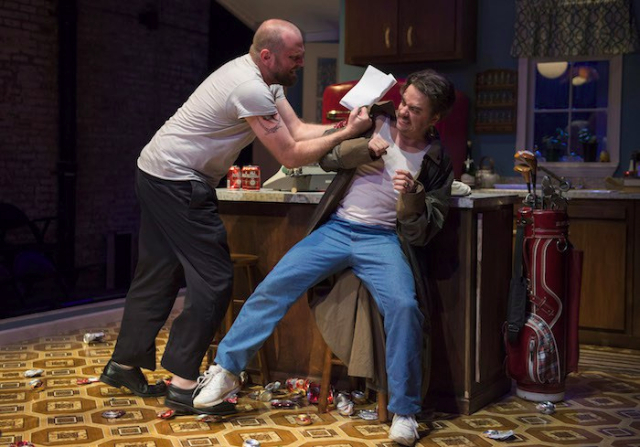 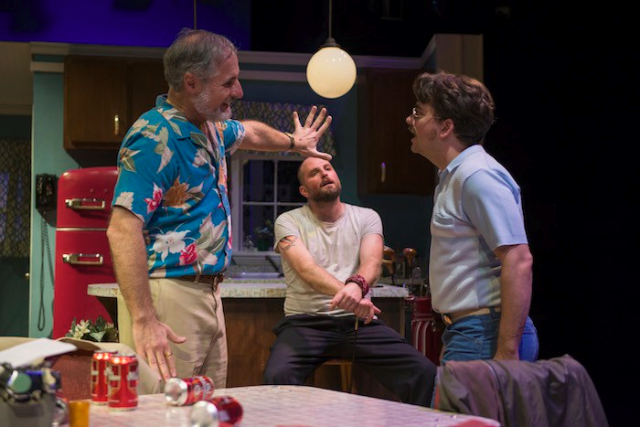 Anyone who had rowdy brothers or raised a pair of sons will feel a chill of recognition at some point during Shattered Globe Theatre’s production of True West, Sam Shepard’s classic play of brotherly rivalry.

The duality of emotion lies in wait in every aspect of our tense two hours with brothers Lee (Joseph Wiens) and Austin (Kevin Viol). They compete and collaborate, love and hate, drink and work, reminisce and prevaricate.

I’ve seen Joseph Wiens play several contemporary males and a 19th century seaman. But I’ve never seen him as scary as he is playing Lee, the black sheep of the two brothers. Tall, bulky, bald and bad, he guzzles can after can of beer and terrorizes his respectable if weasly brother Austin, a screenwriter… until he doesn’t. Lee persuades Austin’s agent Saul (Rob Frankel) that he has a fabulous idea for a screenplay. And why be surprised that Lee succeeds in that persuasion? He talks Saul into a game of golf he didn’t want to play and somehow persuades him to give him his own golf clubs—“as an advance.”

But Lee needs someone to develop his idea into an actual screenplay. When Austin refuses, Lee sits down to become the focused writer and Austin becomes a sloppy drunk.

And then Mom (Rebecca Jordan) comes home from her trip to Alaska. The mess she finds somehow surprises her.

Shepard’s plays have come to be seen as the source of Steppenwolf Theatre’s reputation for aggressive in-your-face theater. And Shattered Globe doesn’t tiptoe around the Shepard script. For the most part, director James Yost keeps the pressure on and the energy up, so that the role switches between the brothers work. The two-hour production at Theater Wit is capably acted and directed. But somehow a spark of Shepardian dynamite is missing.

I’ve always thought some of Sam Shepard’s plays seem like they could be the names of rock groups. They don’t mince words. Buried Child. Curse of the Starving Class. Fool for Love. The Tooth of Crime. Cowboy Mouth. The Lie of Hell. A Lie of the Mind. Forensic & the Navigators.

True West surely inspired Lonesome West, a parallel play about two brothers by Irish playwright Martin McDonagh. The two brothers, Valene and Coleman, fight about anything and everything. The Gift Theatre staged this play a few years ago but my favorite production was by the late lamented Famous Door Theatre in 2002 at the perfectly tiny A Red Orchid Theatre. (Full disclosure: I was on the board of Famous Door at the time, so I’m possibly biased.)

Greg Pinsoneault’s set replicates a 1980s tract-house kitchen (the red fridge is a nice touch) on the thrust stage, with Austin’s writing space at one end. Toast and toasters, beer cans and paper. The set is fully trashed by the play’s action. Clara Wendland’s props and Razer Wintercastle’s stage management successfully and simply choreograph this change.