The Violin at 59E59 Theaters 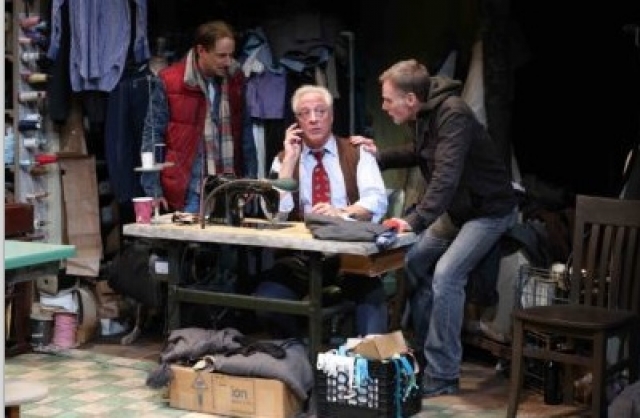 The Violin at 59E59 Theaters

Almost ten years ago, Philippe Quint, a pre-eminent violinist, left his Stradivarius violin in a taxi cab as he traveled from Newark Airport into New York City. The cabdriver Mohammed Khalil immediately reported finding the violin in the back seat of his cab, and he waited at the airport until Mr. Quint came to pick it up.

To honor cab drivers, Quint came to a makeshift stage outside the airport a few weeks later and gave a concert to cab drivers, most of whom were just too busy to attend a concert at Carnegie Hall. “Magic fingers,” the cab drivers called out. They surrounded Quint getting autographs on whatever paper they had, including dollar bills.

Dan McCormick has taken another Stradivarius left in a cab and told the story of a changing neighborhood in the East Village and values that do not endure. A thank you concert won’t cut the mustard as thanks in this section of town.

Now the cabdriver is a young man who suffered brain damage when he fell from the top of a double decker bed. The humor in the tragic situation that impels this drama is largely drawn as a contrast between someone who can think things through and someone who can’t. The play is funny indeed. Not at the expense of Terry, who is as sweet as he is dim-witted. His brother has cared for him since the death of their parents. They have been befriended for as long as they can remember by the old-fashioned neighborhood tailor who loves opera.

The language of the play is simple, but not bare like Mamet. McCormick rounds words and ideas and successfully draws three rich, contrasting characters. Joseph Discher directs to maximize the language and creates a brisk pace.

At first the tailor, Giovanni, suggests the correct way to deal with the violin is to return it. But a concert in Tompkins Square Park is not what Bobby has in mind. He has found out that this violin is worth 4 million dollars, and wants a reward which reflects the value of the violin, not moral probity.

Peter Bradbury in the role of Bobby has the most rounded character and he turns on a dime between the many conflicts that shoot up at him. A tough guy, who makes his money holding up people, he has lost the sense of choice. His parents it turns out were murdered gangland style for mob reasons. He is becoming his father. The toughness and savvy are attractive as Bobby struts and postures. Gio is able to probe his softer, sadder side. In his interaction with his brother, whose obtuseness irritates him, he is clearly loving and helpful.

Brother Terry is on one note, but it is a charming and often humorous one. As McCormick draws Terry, sibling rivalry and competitiveness remain. This makes him seem quite normal. His failure to perceive danger suggests most strongly his mental weakness. He is softly and yet firmly played by Kevin Isola.

Giovanni, nicknamed Gio, is magnificently captured by Robert LuPone. His struggle to find contentment threading needles and sewing perfect stitches is both dignified and sad. For all of his correctness, he clearly admires Bobby, who has enough sass to grab onto the ring of life, even if it is a tainted one. Gio's back story unfolds throughout the play and is more successful when told slowly through dialogue than in the long monologue toward the end of the play.

Gio's final decision becomes clear to us before he makes it. His talented performance on the violin suggests all he might have been, particularly in contrast to Terry’s feeble attempts earlier in the play.

Do we do wrong things to help our families, and right things that have wrong elements? Of course. This is the tightrope on which rich human lives are led and The Violin treads in its own place on the line to make captivating and intriguing theater.