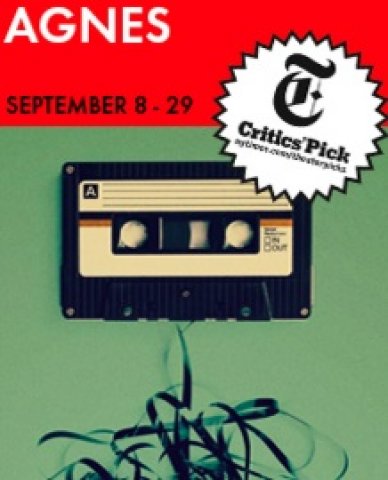 Agnes at 59E59 Theaters through September 29 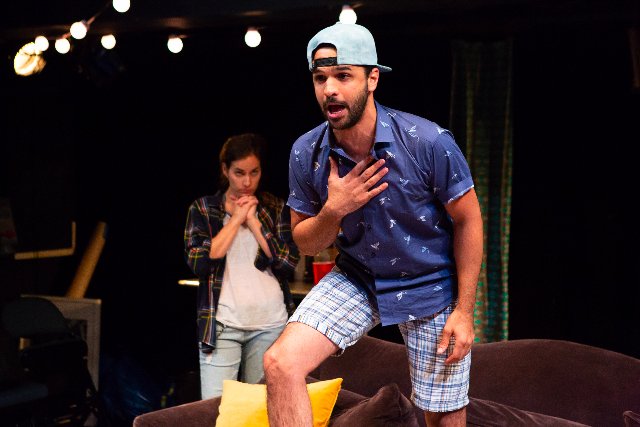 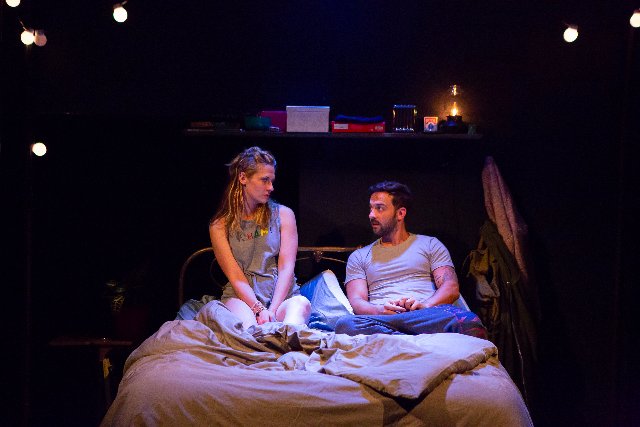 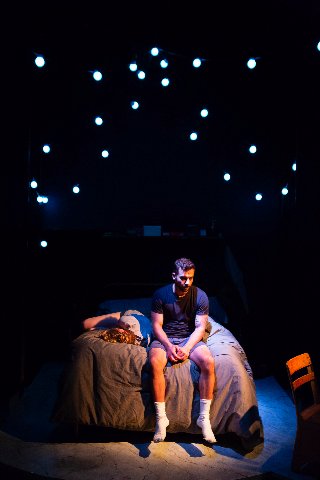 Claire Siebers and John Edgar Barker. Barker is particularly touching as a closed off man trying to emerge from his shell.

Hurricane Agnes is raging outside the small living space of a group of friends in their early 20s. The living room and kitchen are at one end of the stage. A bedroom rises slightly at the other. Lighting from strings of simple bulbs, like American Japanese lanterns, divides the space.

Living here are an awkward young man and his sister, her girlfriend who is studying medicine and a middle of the road friend, Roman, who is oblivious to the oddities around him. He is not obtuse, but rather accepting, even kindly, a key word in Agnes, a new play by the talented Catya McMullen. Roman played with an engaging sensitivity by Hiram Delgado may be us, the audience, at our best.

Charlie has been on the road, tape recording stories of men and women in Wisconsin, North Carolina and Virginia.   He hopes that these stories will help him understand what it is to be human. Traveling on Greyhound, you don’t get to sleep through the night. Frequent stops give the driver a chance to drink a coffee. Often in the middle of the night you change buses. Greyhound travel is cheap and challenging.

For Charlie, travel has cast a light on character. His expression of things human is spare and simple. It has also given him a glimpse of people whose brains don’t short circuit on empathy. His does, he feels. In fact, although he is diagnosed autistic, he does feel.

Into this domestic scene on a dark and stormy night where everyone will be trapped in an emotional hurricane as  Hurricane Agnes roils outside, comes Anna, a lover past of June, Charlie’s younger sister. There is no room for her, yet she will stay because no one will turn her out into Agnes raging outside.

Anna (Claire Siebers) catches Charlie’s eye. He has been inspired to try sex during his Greyhound travels. Even more than her hosts in the apartment, Anna is impulsive. When Charlie offers himself, awkward as the invitation is, Anna strips. The duets between Anna and Charlie, June and her current lover Elle, Anna and June, and Ronan with whomever he can engage, are witty, moving and keep us on edge as we laugh. Laura Ramadie is also an excellent actor.

Playwright McMullen has a gift for the surprise which calls forth an 'aha.' She is on target and creates characters who seem real and surprising. Each of the actors inhabits a full person. The forward movement comes from Charlie, who gives us an inside look at the upper end of Autism, Asperger’s. The wish for disabled humans to be treated as humans in the round becomes poignantly clear.

As we consider what is means for a human to become independent, this perspective is important and unusual. It makes for a lesson embedded in compelling drama which moves from funny to touching on a dime.

The producers, Lesser America in association with Hugh Hayes, are committed to presenting up and coming playwrights and the dark side of experience. In Agnes, they also succeed in mounting first-rate theater.