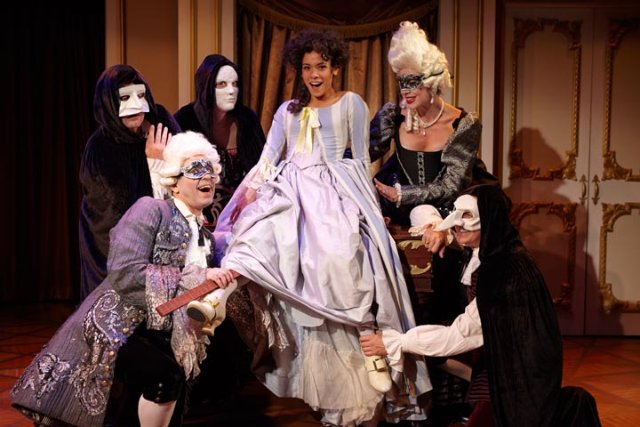 The motion picture is the director’s medium. It best captures the technical broad sweep required and the epic nature of stories being told:  “Lawrence of Arabia”, “Gandhi”, “Out of Africa”, “Patton”, “Gone With the Wind” – with the burning of Atlanta scenes – come quickly to mind.  It’s hard to measure the full impact of “Ben Hur” without the incredibly thrilling chariot race.  On a silver 30 x 40 foot screen, motion picture stories become larger than life.

Television became the love child of the cinema, per force, by employing the cinema convention of the close-up; that was best suited for viewing in the home.  Its strength lies in episodic comedy, sit-com formats, and a plethora of police procedurals, courtroom dramas, and detective driven action stories.  The ancient Greek theatre’s rule of the “Unities”, doesn’t necessarily have to be observed in today’s TV entertainment platforms.

The world of the stage, however, is the medium that belongs to the actor and the playwright along with the vision of the director.  The stage is a living, breathing visual experience. It’s visceral, intellectual, and it’s immediate.  It’s also a live tribal experience where audience involvement in the story and presentation in a darkened theatre, ups the ante of the creative artists performing on the stage.  It’s the grand-daddy of the “spoken word” art form.

NCRT Artistic Director David Ellenstein, understands and values the artistry of professional performers.  Technical challenges can occur when a decision is made to produce a large scale production on the intimate North Coast Rep stage.  The issue quickly becomes how to solve these “pesky technical issues” in the staging of “Amadeus”?   Award-winning Director Richard Baird quickly solves that dilemma along with his technical creative team of: Resident Set Design wizard Marty Burnett, along with NCRT Lighting Designer Matt Novotny, both of whom, over the years have created some of the most inventive set and lighting designs at NCRT.

Director Baird’s bold vision required him to strip-down the script to 10 performing characters without sacrificing any of the drama and/or light comedy moments that run throughout Shaffer’s illuminating, potent, tragic story concerning the early death, at 35 years of age, of musical genius Wolfgang Amadeus Mozart (an astonishing Rafael Goldstein).

The cause of Mozart’s death became the buzz on the street as we say now.  Shaffer’s play, however, is a highly fictionalized account of composers Salieri and Mozart’s interactions during their time spent together in Vienna. Gossip, however, fuels the theory that Mozart was a victim of envy and jealousy at the hand of rival composer Antonio Salieri, the Kapellmeister of Vienna (a mesmerizing Tony Amendola) to the court of Holy Roman Emperor Joseph II, of Austria (Louis Totorto, in a finely nuanced comedy gem of a performance). Playwright Shaffer wisely leaves the decision of what really happened to Mozart to posterity and speculation.  Such is the power of film and words from actors that can change fiction into reality.

Truth as they say is stranger than fiction.  However, truth doesn’t deliver the dramatic punch that an experienced, gifted, playwright and a talented ensemble cast can bring to an intriguing plotline.  Regardless, this production directed by one of California’s finest director’s is ‘great theatre’ to see, enjoy, and ruminate afterward about its veracity.

The beauty of this splendid production lies in the performances of its two leading men: Salieri, brilliantly portrayed by Tony Amendola, (who bears an uncanny physical resemblance to actor F. Murray Abraham) and Mozart, played by Rafael Goldstein, in a highly-nuanced, amazing portrayal.  Both men run the full gamut of emotions in sublime performances.  I’ve seen three previous professional productions of the play.  I wouldn’t exchange these two actors for any who have previously performed the roles.

Also, enough cannot be said about the outstanding ensemble and their individual performances.  Right from the opening scene, the audience realizes it’s in for a special evening of theatre. Christopher M. Williams and Alice Sherman, as characters Venticelli 1 and 2, respectfully, set the tone for the evening with crisp physical movements and in-the-moment-dialogue and vocal deliveries as they perform as a sort of delicious Greek Chorus that keeps us abreast of what will take place over the course of the evening.

This impressive production is a feast for the eyes and ears thanks to the colorful costume designs of Elisa Benzoni, and Sound Design by Aaron Rumley, who arranged the absolutely glorious music of Mozart that is heard throughout the production. The Hair & Wig designs by Peter Herman are spot-on and add to the authenticity of the period.  The Prop Design is provided by Phillip Korth.  Aaron Rumley stage manages the production.