Day to Night by Stephen Wilkes 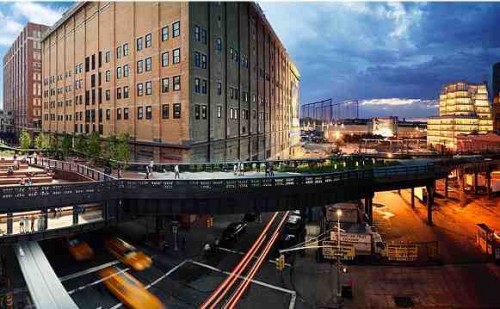 An urban industrial park winds it way up the west side of Manhattan. 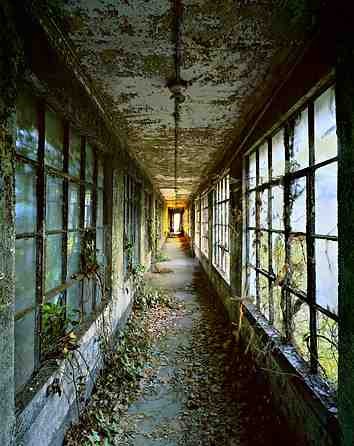 The season may stay the same in Central Park, but not the time.

An exhibition of Stephen Wilkes’ new photographs Day to Night opened at the Clampart Gallery in New York and has caused a sensation.  Wilkes has given us revolutionary images which contain, instead of an instant, fifteen hours.  On first glance we see huge canvases awash in color and motion.  The idea of day to night is not immediately apparent, although the warmer brown-gold colors of night contrast with the harsher blues and whites of day.  The arcs of time passage differ from image to image.

Recording the passage of time in a single image is a radical idea. After all, a photograph is defined as a moment wrested out of time by the person who clicks a camera.  The moment happens, even if the photographer prepares elaborate set ups.  In Wilkes’ images time ebbs and flows.  The images answer yes to the shocking question Wilkes asks: Can a photograph be more than a dazzling instant?

Curiously, Wilkes captures “the chance immediacy of a fleeting moment,” but he does this in a thousand images shot from exactly the same position in a cherry picker hanging over an iconic scene at an angle and a perspective the pedestrian would never see.  These images are blended in photoshop.  Because each image contains so much that is unexpected, the ordinary seems extraordinary.  Wilkes may start in control, but in fact the assembled images capture impermanence and random happenings.

The framing is simple.  There is harmony frame to frame, and proportion.  But the light is changing and so too the people as Wilkes blends images to create the passage of time.

What the observer of a Wilkes image sees first is the pointillism of a million tiny points of different colors laid out sometimes in random patterns, but also seemingly very controlled.  Cotton candy colors abound, cerise green, shocking blues, the sunshiniest yellows and golds.

Tantalizing groups of people, alike in their position, remind us of our similarities, our community.  Wilkes is not a photographer who can leave his heart behind, ever.  His images saved parts of the immigrant gateway to America, Ellis Island.  He also can’t stop experimenting with ways to express ideas and elicit emotional response.

Light of course changes as time passes.  New colors are created.  The sunshine gold of taxicabs and the blue of the Atlantic Ocean or the bluish white of snow-covered trees in Central Park all are of unusual tint.  The quality of texture, one of Wilkes’ fortes, is most clear in the park trees.  You feel like you are in an entirely new space and world.

Taxis move, boats sail, but most clear are the changes in figures. When Wilkes shoots a window, you want to look inside to see what is there.  In these radical Day to Night images, you want to move close in and examine after you have been arrested by the oddity of a still frame containing changing time.  Wilkes describes a timeline in photography which starts with the still image, and continues with Muybridge capturing multiple still images in sequence, then motion pictures, stroboscopic photography and then video capturing still and moving images simultaneously.  Wilkes sees the compression of time in his Day to Night series as a natural evolution of the still photograph.

The High Line which runs close to the gallery displaying these images, is photographed facing west. Tucked into the left of the frame is a stadium seating area where people can observe the street. The High Line is an intimate industrial city park. When you walk it, it hugs you with reeds and grasses.  Way in the background in the middle of the picture is the Chelsea Piers driving range with netting rising high enough to keep golf balls from falling into the Hudson and knocking out fish.  A taxi streaks into the night, a slash of color much like movement created by a Franz Hals brushstroke.  Some light lines in the center of the structure are mysterious.

In the Times Square image that not only does Night start at the left frame and go to Day on the right, but night also opens to day as the image recedes into the top of the frame. So too in an image of Park Avenue going into a golden, nightlight of Grand Central, day is at the bottom of the frame and night at the top, with the shimmering Chrysler Building and a dominant Met Life sign.  There is a pedicab in the foreground of Park Avenue, I imagine.  Could it be a parent with a stroller instead?  Intrigued, I will fix my stare till I figure this out.

Because these images are large and unusually detailed, they are as much like Bruegel paintings as you can imagine—a picture of life of all kinds of people in our times.

Jay Maisel, a mentor of Wilkes, has this to say of Wilkes’ most recent work.  “Stephen Wilkes is not a normal person, but we’ve got enough normal people already. He’s not “insane” that’s too strong, he’s not “mad” that’s too British.  He’s just not quite normal. A normal person would either do still images, or not being content with that, he would do film or “cinema”.  But no, not Stephen. In a move that typifies the “arrogance” of all true artists, he has done something, which only the artist can do. He has produced a body of work, which (whether you love it or hate it) will change the way you will look at the world. He has toyed with the time space continuum, slavishly documented it, ruthlessly altered it and in the process has carved out his own private enclave of perception.  I'm sure this is the beginning of a new direction for him. It will in all probability grow and mature as he does, as it is already, it’s awesome.”

If you can’t get to Clampart, you can view the images on stephenwilkes.com