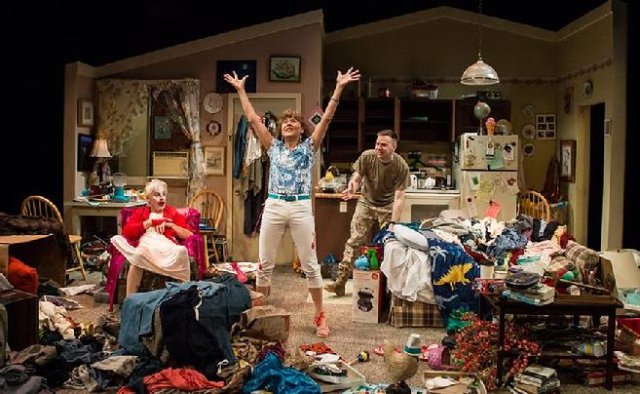 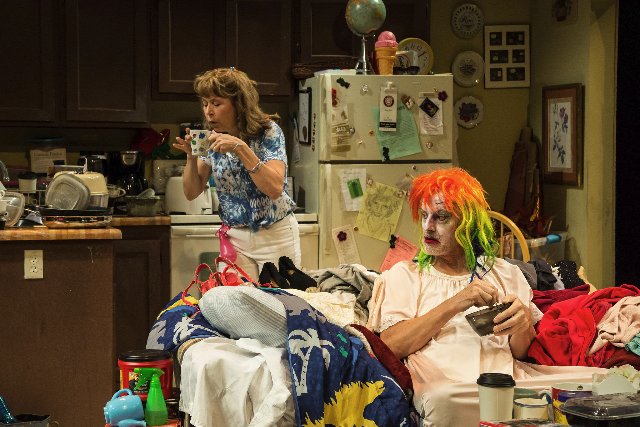 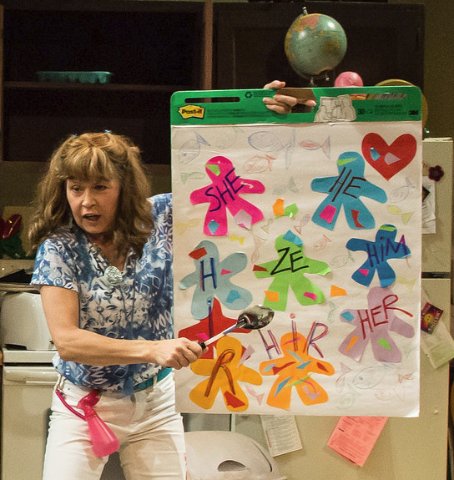 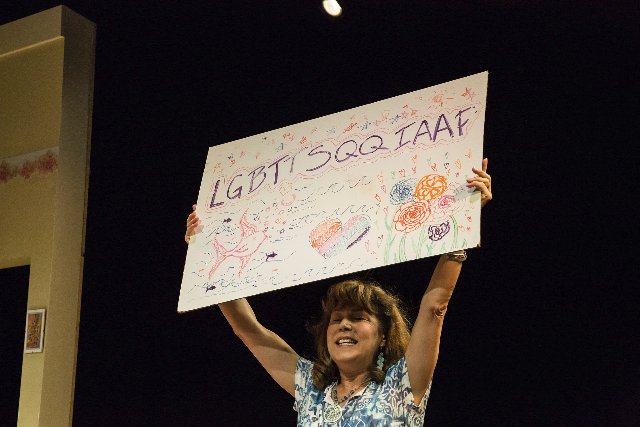 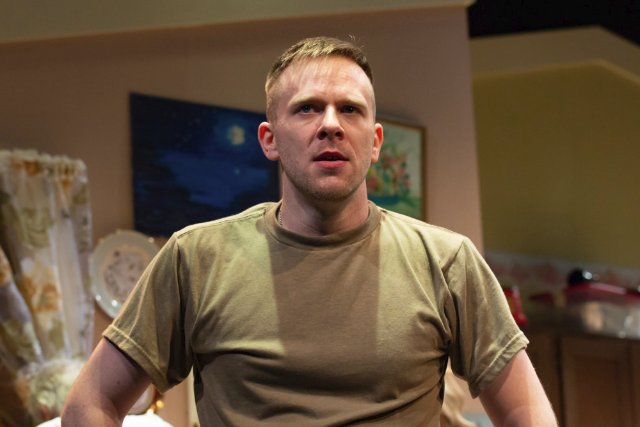 Isaac was dishonorably discharged from the Marines. 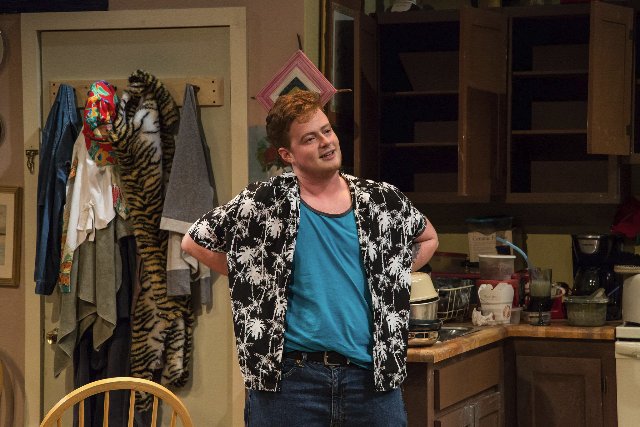 With HIR by MacArthur “genius” playwright Taylor Mac, who answers to judy, social justice theatre with an apocalyptic, gender, transitional trope, has landed at Shakespeare & Company with a bang, thud, tsunami. This is the best, worst, most enlightening, controversial, horrendous, terrific/ horrific play you will see in a month of Sundays.

With a meticulous production of a topical and challenging play, brilliantly directed by Alice Reagan, for better or worse, anything is possible.

Beauty is in the eye of the beholder. For the most part, however, this is a grating or galvanic, plug ugly evening. Depending upon the degree to which you are up to speed with cutting edge contemporary theatre, this was an experience either to enjoy or abhore.

While this production polarizes audiences it is doubtful that anyone drives home apathetic to what they experienced.

Kudos to the company and its magnificent actors for taking on such an extreme “dark comedy.” It manifests that S&Co. has been to the burning bush and come back with tablets. While some have been worshiping Baal, and that the company may wander in the desert for a generation, is more or less a moot point.

Built over a landfill, Arnold (John Hadden) and Paige (Elizabeth Aspenlieder), have endured a troubled marriage in a “starter” home. In the falling apart, cheap, sheetrock and plywood “temporary” home they have raised two kids. Their daughter, now answering to the pronoun hir, is transitioning to Max (Jack Doyle). To find a shred of discipline and order in his life Isaac (Adam Huff) is a now dishonorably discharged Marine.

He has returned from active duty in the mortuary division which entailed collecting bodily remains. That would seem to serve him well in arriving home to utter chaos.

In the cluttered set, designed effectively by Carolyn Mraz, laundry is strewn about and piled high on a mismash of Goodwill furniture. Add to that dirty dishes and bare cupboards. It’s a conundrum how the family gets along with such basic needs as cooking, cleaning, bathing and fundamental sanitation.

We learn that Arnold has been an abusive monster. But, as events ensue, is the self-centered, righteous, punishing Paige any different? Their atrocities are mostly a wash. It is difficult to have pity, sympathy or empathy for arguably the most vile theatrical couple since Who’s Afraid of Virginia Wolfe. That’s an apt comparison as Mac may be our uber playwright at warp speed. Shock art, over time, takes more effort and energy to get the same result.

The tables turned after Arnold lost his thirty-plus-years gig as a plumber to a young Asian woman. That spiraled him into booze and abuse until the ersatz blessed event of a stroke. From there the ball has been in Paige’s court. Revenge is a dish she serves cold.

She has, literally, attempted to emasculate and humiliate him. They live in squalor because he doesn’t deserve better. Tossing his medications into a blender she adds tranquilizers and estrogen. Mostly he is comatose and incontinent. She dresses him in a nightgown under which are adult diapers. Now and then she takes him outside and hoses him down. There is a daily ritual of making him up in grotesque Halloween drag with a fright wig.

Arnold tries to escape and parade around the hood. Early on she tells him to shut the door. This is a matter of wills that goes on and on and on and on. When he occasionally comes out of a stupor long enough to lash out, verbally or physically, she sprays him. This disciplinary device is attached to her waist.

Home from the war Isaac has a lot to catch up with. It seems there was a lapse of communication. His teenaged sister is now a brother and daddy is in nightmare drag.

When Paige makes the ‘shaky shake’ concoction in a blender it sends Isaac to the sink to barf. That trope is repeated, literally, ad nauseam.

There is a lot to explain which Paige, played over the top in another indelible performance by Aspenlieder, does with gusto. Embracing all the current PC mantras she is striving for a better, gluten free, transgendered world. She produces a chart to clarify how the pronouns his and her conflate to hir. There are now so many subsets morphing beyond LGBT that its requires another poster.

Cleaning and washing are shunned because they pollute the atmosphere. She heads a committee to buy back neighborhood homes over the landfill. Some of these will be razed to create green space and community gardens.

Surveying the chaos Isaac rightly asks how Paige is paying the bills. Max helps to explain that they have sold their house to the trust. “It’s kind of like a reverse mortage” he states. By now the money is pretty much spent. But they can live in the house as long as the owner on the deed, Arnold, is alive. It’s an interesting plot point as to why, like a snarling bitch on a leash, hir is kept around.

On an odd vocal occasion Arnold says that "My penis is my best friend." When Isaac gasps that his dad is growing breasts mom  answers that now Arnold can fondle hirself. There is a lot of discussion of self gratification. Iaaac has been busted for having meth blown up his ass. Taking a straw Paige tries to graphically illustrate how that is possible. You catch the drift why much of this comedy is no laughing matter.

Can I have an Amen.

Using charts and signs Paige explains new gender paradigms to a straight and confused Isaac. Waving a poster she displays and pronounces the updated acronym LGBTTSQQIAAF. We have progressed leap years beyond which public bathroom to use.

At the end of the first act Paige and Max are off to a museum for the day. The exhibit is built around relics of a saint. That evokes Isaac on the topic of body parts. He insists on staying home with his dad. They will catch up and spend some quality time together.

By the beginning of the second act Isaac has been cleaning and tidying up. The table is set for a family dinner of fried chicken. Arnold, now dressed in male attire, is delighted to be watching TV.

All of which induces a tantrum when Paige arrives home. Quickly Isaac's efforts are undone and there is a return to chaos. Matters go south and let’s say there is no happy ending or resolution.

We are left with jangled nerves and a frayed tangle of loose ends. There are just too many questions that get swept under the tattered rug. It seems that Mac spent 17 years on the play which judy describes as mostly biographical. It appears that the play was abandoned rather than resolved.

For example, if Paige never does laundry, why is she attired (by Charlotte Palmer-Lane) in crisp white pants and a nice clean top? While she spouts off PC theories about gender and the environment are they her (the correct pronoun) ideas or did she get them from Max.

There are a lot of transgressive words to go along with the transgender drift. Max is gobbling testosterone to grow his clitoris into a penis. To emphasize this Paige jumps up and down chanting clitoris, clitoris, clitoris.

Isaac gets one of the best laughs of the evening when he quips that squid live in the ocean and didn’t need to be invited to the arc.

It all got just a bit too confusing for my lame old brain. What to make of Max who is adding muscle, growing a penis and beard? However, Max prefers guys.  Hir hopes to join a “radical fairy commune where they have gender queers who have actual discourse and ideas and where they grow their own food and recycle and have heart circles and sexual freedom.”

Is that the best of all possible worlds? Oh well, get used to it.