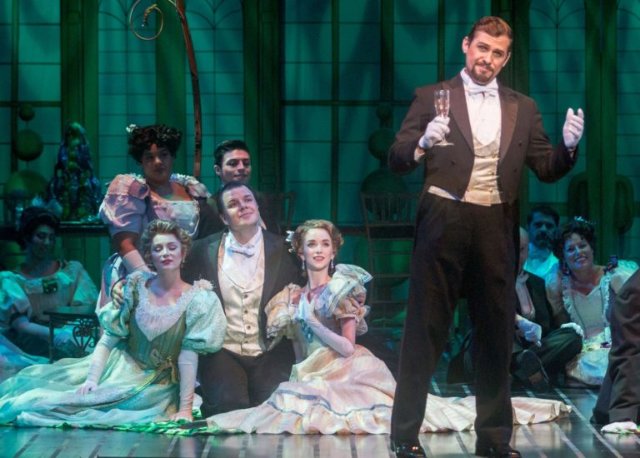 The intersection of the world of grand opera and musical confection rarely occurs. An exception to that rule would be Johann Strauss’s operetta Die Fledermaus. Containing bubbly, beautiful music strains with Viennese motifs, such as waltzes and polkas, and large swaths of humorous dialogue, it has been a standard in the opera house repertory since its debut in 1874. Opera San Jose’s production of this bonbon brings out all its delight.

The setup is that banker Gabriel von Eisenstein has been convicted for minor financial malfeasance and is about to turn himself in for a few days of jail time. But in convincing him that it would be okay if he reports to the jail any time before the warden arrives for work in the morning, his friend Dr. Falke arranges for him to have a last fling at Prince Orlofsky’s ball that night. Little does von Eisenstein realize that Falke has engineered a complex practical joke as payback for an earlier one at his expense. The scheme will involve von Eisenstein, his wife Rosalinda, and their chambermaid Adele all appearing at the ball unbeknownst to one another and in embarrassing circumstances. Plus there will be a false arrest based on misidentification.

The opening scene occurs in the parlor room of von Eisenstein’s home. He is portrayed by Eugene Brancoveanu. His relaxed yet powerful baritone is so appreciated by Opera San Jose that he is slated to appear in every production in the season. His adept comic skills, which he says comes from having three kids, hit the spot as well, highlighted by his Jackie Gleason-like hip swinging. As Rosalinda, Maria Natale continues to impress OSJ audiences with her stellar blend of powerful lyric singing and charismatic presence and acting. She enchants at the ball scene, executing the fiery czárdás (dancing song) “Klänger die Harmat,” while disguised as a Hungarian countess.

Another partner in confusion is Adele, played by Elena Galván. Her intense soprano provides penetrating and hilarious shrieks and howls but also accomplishes startling coloratura runs and leaps. The final victim is Alfred, Rosalinda’s voice coach and lover, who, to his misfortune is mistaken for von Eisenstein. Fine tenor Alex Boyer plays the Italianate role which includes the opportunity to sing snippets of famous Italian opera arias, which he does with great aplomb. Finally, the perpetrator of the hoaxes is Dr. Falke, the title character, who is played by Brian James Myer. He possesses a lyric baritone voice with an exceptional clarion quality.

Maestro Michael Morgan maintains brisk pace throughout the musical sections, resulting in a spirited rendering of the score. The long spoken sections which could otherwise drag are aided by well-designed slapstick and mugging delivered with great skill and enthusiasm by the whole cast. The set design relies on one backdrop for all three scenic locations, but sufficient variation is created by accessories. Plus, the three venues – parlor, ballroom, and jail – differ so greatly in costumery and number of artists on stage that the visuals are unique and interesting in their own right.

One perturbing absence is the lack of supertitles for the dialogues. Even though they are spoken in English, it is difficult for many audience members to understand the words, especially coming from some performers. This deficiency would have taken little to provide for. Although spoken English probably suits a majority of the audience, language and mode shifts sometimes create a jerkiness of flow. Purists would definitely be a small minority, but they would argue that German should be used throughout. The picky may also complain that as beautiful as the Puccini arias are that Alfred sings, they did not exist until decades after this operetta debuted. In any event, these are minor issues in a production that provides great pleasure.