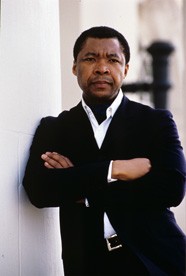 Because of the international significance of the material, this Special Report on soon to be announced plans for documenta XI, will be presented in several issues of Maverick Arts. The first installment will discuss the Five Platforms that will comprise documenta XI as well as a general overview of the international exhibition. Subsequent issues will cover the complete text of an interview with the organizer, Okwui Enwezer, and reactions to a decision to launch the first platform in Vienna, Austria, where there has been a call for a cultural boycott against visiting, or participating in, Austrian based projects. This is in response to the current political dominance of the Freedom Party of Dr. Joerg Haider, who has openly expressed sympathies for the Third Reich. Haider’s father was a high ranking member of the Nazi party.

Reactions and responses of readers are greatly encouraged. This material will be included as a part of a continuing discourse.

During a brief layover from Great Britain to Cuba, Okwui Enwezer, the Nigerian born organizer of documenta XI, presented a two and a half hour lecture, at MIT, in Cambridge, Massachusetts, describing the history and plans for the upcoming exhibition in Kassel, Germany. Following this epic presentation, he granted me an interview in which he further discussed some of the controversial decisions for the next documenta.

He was invited to lecture at the List Visual Arts Center, by its director, Jane Farver, on the occasion of the exhibition, Global Conceptualism. He had served as a member of the curatorial team for that important exhibition.

Much like the Whitney Biennials, each new project seems to be a response to the criticisms of the prior one. Under its director, the Belgian, Jan Hoet, documenta 9, in 1992, was critiqued for its sprawling, circus like, sense of spectacle. The ego and personality of the director was a significant part of that experience. Hoet’s installation took full advantage of the site including the permanent buildings, Museum Fridericianum, documenta-Halle, Orangerie, Neue Galerie, Ottoneum, as well as, temporary Pavillions and numerous site specific works.

The documenta X of the French curator, Catherine David, by contrast, was austere and scholarly. She created a new space in the train station, but destroyed the pavillions and included very few site specific works. Her exhibitions were all inside and there was little sense of festivity or spectacle. In documenta-Halle, she created a setting for 100 Days 100 Guests, a series of daily talks, and also made the internet an important part of the event.

Although her documenta was widely criticized as cold and theory driven, it attracted 750,000 visitors. This compares to 250,000 for the most recent Venice Biennale. And, 6000 journalists filed reports that fill 27 volumes of clippings.

Enwezer, respectfully discussed how documenta X ended Phase Two of the series. David contextualized politically inspired artists by including such masters as Walker Evans, Marcel Broodthaers, works from the 1960s of the seminal Latin Americans, Lygia Clark and Helio Oiticica, the Atre Povere objects of Michelangelo Pistoletto, and major German artists including Gerhard’s Richter’s epic, Atlas, and Hans Haacke’s, Shapolsky et al. She reconfigured modernity and contemporary art as it had been conveyed by prior documentas.

While David’s project brought the art of the 20th century to a thoughtful conclusion, it wasn’t, well, much fun. Kassel, a rather tough, industrial city of 200,000, dead center in Germany, is not an attractive destination. Other than for documenta, there would be little compelling reason to visit. The city has been largely rebuilt because of massive bombing, in 1943, in which 10,000 died.
In an earlier era, Kassel was a more important cultural center. The Fridericianum Museum, for example, was Europe’s first public museum, when it was founded, in 1842.

The appointment of Enwezer, the director of the second Johannesburg Biennale, came as a surprise, but has also opened up new possibilities. It is anticipated that there will be a greater presence of global artists. Enwezer has not entirely revealed his plans but we should expect the unexpected.

Based on his respect for documenta X, we should anticipate greater similarities to her strategies, than a return to the fanfare and spectacle of documenta 9. The documenta of Enwezer will be a time for debate and dialogue rather than art related tourism. In contrast to the cerebral David, Farver, describes Enwezer as, “very visual.”

When asked for specifics, Enwezer explained that the opening of the Kassel exhibition is still 18 months away. Accordingly, he is unwilling to discuss invited artists or to describe how the city, its buildings and grounds, will be used to create an installation.
From March 8 to April 23, 2001, in Vienna, the first of Five Platforms, Democrary Unrealized, will be launched, continuing in Berlin and London.

From May 7, through 14, Platform Two, in New Delhi, concentrating on film and video, concerns Experiments with Truth. The theme of Platform Three, is Creolite, in November, 2001. Platform Four, in Lagos, Nigeria, Under Siege, will involve four African cities under stress: Lagos, Freetown, in Sierra Leone, Kinshasa, in the Republic of the Congo, and Capetown, South Africa. Platform 5, the documenta XI exhibition, opens in Kassel, in June, 2002.

The Platforms will involve participants from a broad range of disciplines as well as artists, city planners, and architects. At MIT, Enwezer was asked how these Platforms will reflect artists invited and specific works to be seen in Kassel. There was no clear answer as to how that issue will be resolved. The geographic range and remote location of some the Platforms will certainly limit the audience and media coverage. Through the internet, however, we will have access to the results of this critical discourse.
At MIT, he sketched the history of Phase One, its founding in 1955 by Albert Bode, and Phase Two, from 1972 through 1997, leading to his launch of the global Phase Three. His ideas may reshape the concepts of ever more ubiquitous Biennales in Istanbul, Montreal, Shanghai, Johannesburg, Rio, Cuba, Pittsburgh and Venice, to mention but a few.

The first documenta, in 1955, accompanied a Flower Show that attracted 2 million visitors. That first exhibition drew 150,000 visitors. The last documenta organized by Bode was in 1968. This was a time of international political protest that demanded an end to documenta and its contrived political agenda.

Phase Two, according to Enwezer, commenced with documenta 5, in 1972, organized by Harald Szeeman. “It wrecked havoc,” Enwezer said, “It destroyed the museological notion. It was the emergence of a new avant-garde with Fluxus, performance, and conceptual art. It was the first time for site specific pieces. It included time based pieces that destroyed the notion of time. It was a time when subjectivity played a role in art making. It included photography and video and changed the paradigm of exhibitions.

“There were certain constants. Beuys, for instance, showed in every documenta, until 1979. Richter was another constant. The David documenta represented a conclusion of this concept. She included Richter, for the last time, with his magnum opus, Atlas. She showed this epic work, in its entirety, which took several galleries. He is not included in documenta XI. It is a time to make way for new and younger artists.

“It has also shifted away from all male, European curators and began to include non European artists. Alfredo Jaar was included in 1987. And, the first African, a sculptor from Senegal, was included in 1992 (Mo Edoga).
It raises the question of the West as the arbiter of value in art. Is the West ignoring a view of sites of importance in producing art. Do you curate by art history or by country?”