Whitewashing the Bulgers and Southie 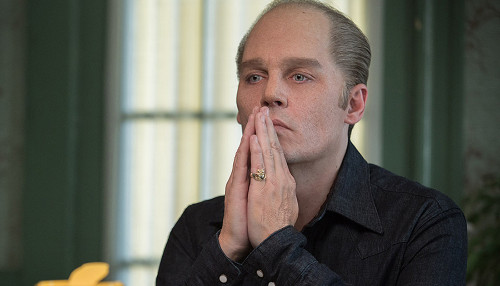 Johnny Depp as Whitey Bulger in a reflective moment. 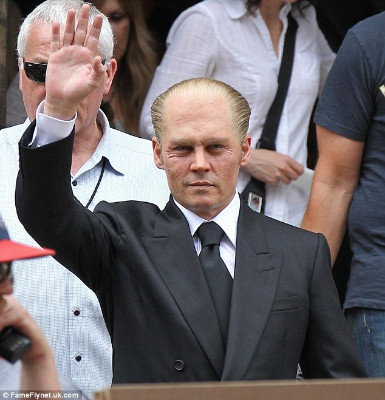 Depp made up to create a physical resemblance. 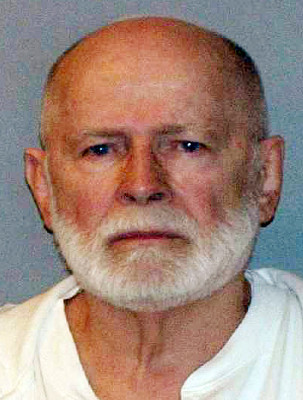 Mug shot of Bulger at the time of his eventual arrest. 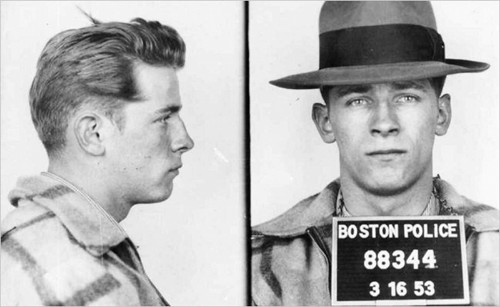 Bulger as a young hood prior to FBI protection. 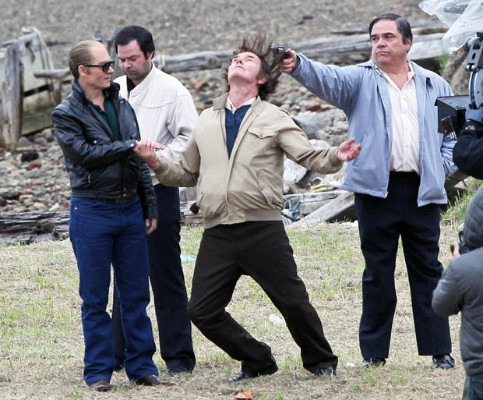 Whacking an associate that dared to insult him. 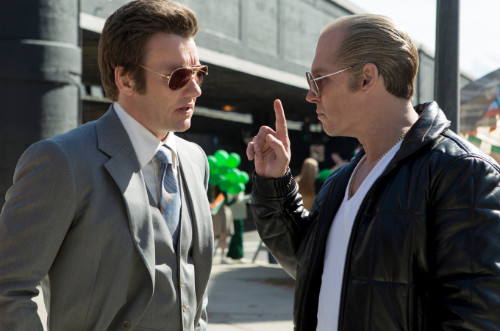 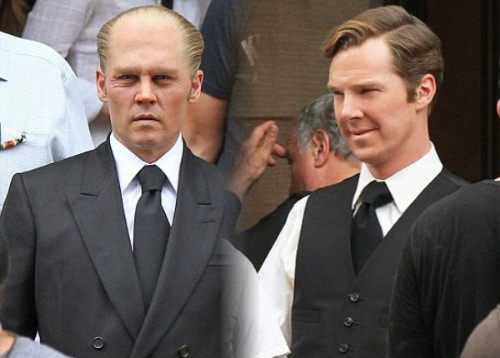 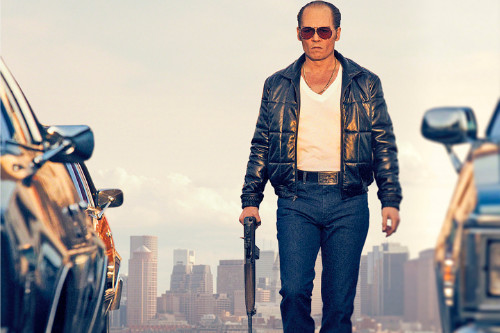 Whitey on a rampage. 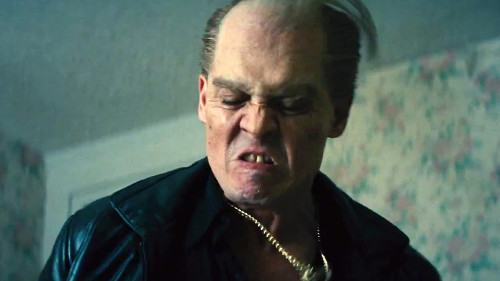 For his ghoulish, deadpan, mask-like transformation into the brilliant, cold hearted killer, James Whitey Bulger, the media is buzzing about this as a comeback role for Johnny Depp with anticipation of an Oscar nomination.

In interviews, Depp, who doesn’t go to the movies, stays away from Hollywood, and pursues his own eccentric muse and motivation that notion is treated as insulting and absurd.

That’s a sanguine gloss for the last few flops that caused him to drop on the Hollywood flow charts. The often feisty Depp knows that the best defense is a good offense. Taunting the media and his loyal fan base works well for him.

But it doesn’t cover for an at best flawed performance in a generally mediocre and formulaic gangster picture. His Bulger lags far behind that of Jack Nicholson in the much superior “Departed” of the master Martin Scorsese.

Nicholson’s Irish thug was truly menacing compared to Depp’s performance, under that layering of makeup attempting a physical resemblance, he is more method than madness.

As a native Bostonian of mixed Irish and Italian heritage, for me, the run of the mill film directed by Scott Cooper; written by Mark Mallouk and Jez Butterworth, and based on the book by Dick Lehr and Gerard O’Neill, sails wide of the mark.

They miss the point of the traditional clash of Irish catholic Southie and Italian catholic North End and Eastie. The reality is a face off of corned beef and cabbage vs. pizza and cannolis.

The true story of “Black Mass” is a period piece of the last gasp of immigrant Boston and the turf wars of its deeply ethnic neighborhoods. It harkens back to what Oscar Handlin documented in “Boston’s Immigrants, 1790-1880.” Were one to update his classic study it would include the gentrification of Southie and how relatively few Italians remain in Eastie which is now a mix of Hispanic and increasingly middle class whites. There have even been media reports of the shrinking of Chinatown with an Asian population dipping under 50%.

The core of the epic focuses on the brothers Bulger, Whitey and Billy (Benedict Cumberbatch), and their friend John Connolly (Joel Edgerton).

With deep roots in hooliganism and a dash of the bloody IRA the three Irish pals grew up on the streets of Southie in a juvenile version of cops and robbers. They evolved into adult ramifications of those roles with the kind of hoodie code of honor and silence (the Irish version of the Mafia code of omerta) that forged the unholy alliance of FBI agent Connolly and his CI or confidential informant Whitey. As Connolly explains to the Agency he is know as Jimmy to his friends.

The plan is to use Whitey’s insider intel to infiltrate and take down the Angiulo family which runs the mob from the North End. In reality the Angiulos answered to the New England don, Raymond Patriaca of Rhode Island, who resided in a Newport fortress.

When an earlier Angiulo patriarch passed on he was given a royal send off. Cardinal Cushing presided and the Boston Chief of Police directed traffic.

In its pact with the devil, to get the Italians, the FBI empowered the crime spree of a minor Southie hood, Bulger, head of the Winter Hill Gang, who evolved into a major player. While playing god and king maker the government agency swapped apples for oranges.

The failed strategy of the Cooper film is to reveal the humanity of Whitey who was widely admired as a community leader in the hood. It explores the corruption and degeneration of Connolly who was sucked into the lifestyle and bravado of the mob that paid him off for running interference with the cops.

In an approach that could have been more fleshed out Cooper offers flashes of the impact of a life of crime on the wives and lovers of the thugs. One of the most chilling scenes in the film is a terrifying interaction between Whitey and Connolly’s wife (Julianne Nicholson).

Similarly, we crave more of Dakota Johnson (Lindsey Cyr) the mistress of Whitey and mother of their son that died. She bravely stands up to him in a manner that earned a bullet in the brain for an associate who dared to publicly insult Whitey.

The key character in the saga, who ends up on the cutting room floor, is the fascinating other Bulger. While his brutal brother was doing time in the slammer his younger brother Billy, a triple Eagle (BC High, Boston College, Boston College Law School) rose to the position of speaker of the senate and after the governor, was the second most powerful politician in The Commonwealth. A man of elegance and scholarship Bulger was, for a time, chancellor of the University of Massachusetts. It was a plum position which he orchestrated in the back halls of the State House. He resigned when it was revealed that he communicated with his brother while a sixteen year fugitive from justice.

The more fascinating story is how the brothers coming from the same circumstances evolved into yin and yang opposites while maintaining familial commonality. Billy is as deserving of a film as is Whitey.

The decision of casting the brilliant but inappropriate Benedict Cumberbatch just never gains traction. Cumberbatch is a superb actor but this may prove to be his least inspired role. He conveys none of the smarmy, supercilious arrogance, nuanced deftness and utter corruption of the real life Billy. In addition to fathering a family of nine he enjoyed phone sex and liked to watch according to a CI. There is none of that in this film and he is portrayed as a benign loyalist.

Shame on all of us for buying into the Whitey mythology. My Bad. But there are no excuses for Depp who made an off-his -rocker statement about a mass murderer and sociopath.

“No disrespect to any victims or families of victims but there was some element for me that was kind of glad that he got away” Depp said. “For 16 years he was on the lam and he wasn’t causing any trouble. He was living his life. Good on him.”

Johnny, you’re a bit weird but do you know the difference between right and wrong? At what point do you turn off the act? Say five Our Fathers and Five Hail Marys and wash your mouth out with soap. Then stick the Oscar, when and if, up your ass.

Ok you did a pretty good job with Whitey but you ain’t no Brando as Don Corleone.

When it comes to movies, let’s face it, the Italians are much more interesting and iconic than the Irish. Give me a cannoli any time and save the corned beef for St. Patrick's Day with a Guinness.