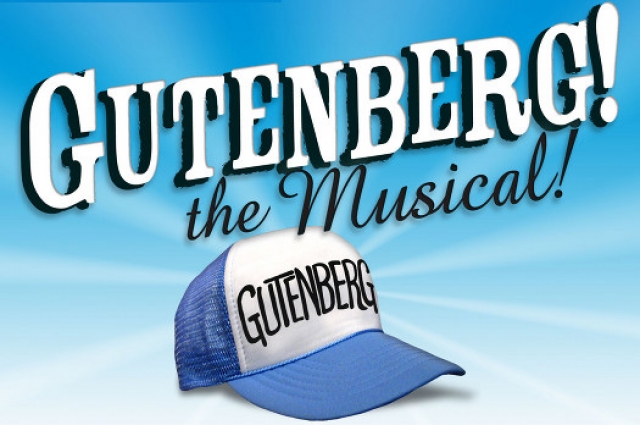 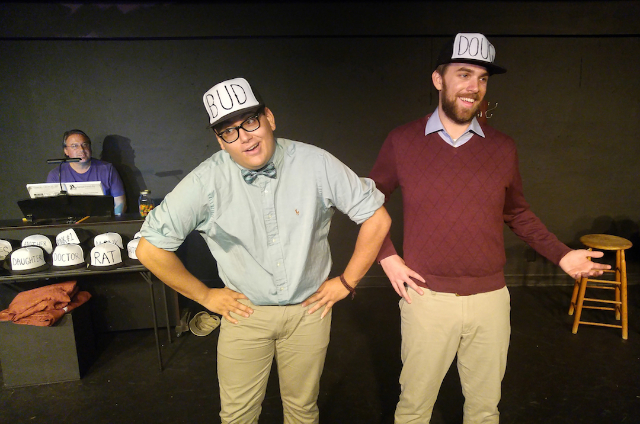 -Each seat for Evening Star Productions’ hilarious, tour-de-force staging of “Gutenberg! The Musical!” is reserved for producers.

Audience members can sit in them anyway.

Well, they’re producers – at least for the afternoon or evening they’re attending.

Audience members play a pivotal role in any show, but especially this one. That’s because the fate of a musical by characters Doug and Bud rests in the pocketbooks and banks of the producers.

“Gutenberg! The Musical” is framed as a backers audition for the show-within-the-show, also called “Gutenberg: The Musical.” The show, Doug and Bud hope, hope, is a splashy, big musical bound for Broadway about Johannes Gutenberg and his invention of the printing press.

Problem is, as ambitious, devoted, likable, wide-eyed and enthusiastic as the duo are, they’re inexperienced when it comes to writing for the theater. That becomes obvious in the musical-within-the-musical, which real-life Broadway producers would scoff at for many reasons.

There’s a development in Doug and Bud’s show that even audience members with the strongest ability to suspend disbelief would have trouble accepting: A wine press turned into a printing press by Gutenberg in a single day. There’s also a distracting song about biscuits, the music in general is unmemorable, the lyrics aren’t clever and the plot is steeped in melodrama that seems quite a stretch. But the fact that the naive Doug and Bud so wholeheartedly believe in their show, despite its shortcomings, is part of “Gutenberg the Musical’s” appeal.

Far from a biting satire, Brown and King’s small-scale musical is a huge-hearted love letter to and gentle parody of the art form that is musical theater.

Some of its material is naughty and even borders on the offensive, but it’s all in good nature. Brown and King’s show has gentle fun with musicals such as “Sweeney Todd: The Demon Barber of Fleet Street” and Brooks’ “The Producers.” The show also pays tribute to and parodies musical theater conventions and “fanboys.”

Bud and Doug are such individuals, although they’ve taken their love of musical theater further by creating their own show. You can’t help but admire them: Their finances and resources are scant but, like true troopers, they’re committed to presenting their show to the producers…even if it means playing all the parts and singing without an orchestra. Each time they switch to a new character, they don a hat with that character’s name. Talk about wearing many hats…

The pair might bring to mind characters from a musical in a similar vein titled, simply, [title of show]. Those characters, Jeff and Hunter, are just as charming and likable. With the deadline looming for submissions for a new musical theater festival, the pair decide to create a show. [title of show] takes us through the creative process and the two men learn about art and themselves.

Like “Gutenberg The Musical!,” [title of show] was highly regarded, receiving a Tony Award nomination for Best Book of a Musical in 2009. “Gutenberg,” also garnered accolades, including a nomination for Outstanding New Off-Broadway Musical.

“Gutenberg” has echoes of the Broadway smash hit “Something Rotten” that will close its Great White Way run Jan. 1 and launch a tour on Jan. 18. In that critically-acclaimed musical comedy, two brothers are also desperate to write a hit play.

As is the case in “Gutenberg,” “Something Rotten” takes us way back in time, to the 1590s, where Nick and Nigel Bottom try to succeed in the shadows of William Shakespeare. A soothsayer comes to their rescue, foretelling what we, the audience, already know: That the future of theater involves acting, singing and dancing simultaneously. The soothsayer is, of course, referring to musical theater. A light bulb goes off in the brothers’ heads.

Part of these shows’ appeal lies in our ability to identify with the very human desire to create something artistic and achieve success with it. We’ve either experienced such success, dream of basking in it or know someone who has succeeded or has strong desires to come out on top.

Of course, any theater lover, especially musical theater aficionados, will find plenty to love in this valentine to the art form. Such individuals and even those new to theater will even learn something about live theater in a fun and humorous manner.

Speaking of fun, humorous and vivacity, we must mention the immense talents of performers Robyn Eli Brenner as Bud and Alex Weiss as Doug. That’s especially true since they play dozens of characters and are able to summon plenty of stamina to do so.

Brenner plays Bud as a wide-eyed, goofy guy, while Weiss’ Doug is a doggedly determined and unabashedly ambitious dude who delivers funny lines in a deadpan manner.

Brenner is particularly effective as an evil Monk, who is trying to thwart Gutenberg’s attempt to spread the written word through his newly-invented printing press. He speaks in a gravelly voice, yet is always easily understood. His wide, dangerous eyes and calculating manner lend a conspiratorial nature to this conniving man.

Brenner excels in song, reaching a falsetto-like voice in some songs without screeching. Brenner and Weiss, who sings ably as well, are backed by the skillful playing of Jason Buelow on a keyboard.

Both actors, under Ben Sandomir’s vigorous direction, excel at seamlessly changing from one character to another. However, it’s questionable why, at times, they speak in a man’s voice while playing female roles.

The scenery, credited in the program to Dean Landhuis, Seth Trucks and Kate McVay, is simple. A hanger and stool are about all the scenic elements on Sol Theatre’s intimate “Black Box” stage. It’s one that allows the focus to be more on the story and characters and less on the scenic elements.

Landhuis is also the lighting designer and he’s chosen appropriate hues, such as red for danger.

The primary danger of attending a show like “Gutenberg the Musical” is addiction.