The New Group Presents The True 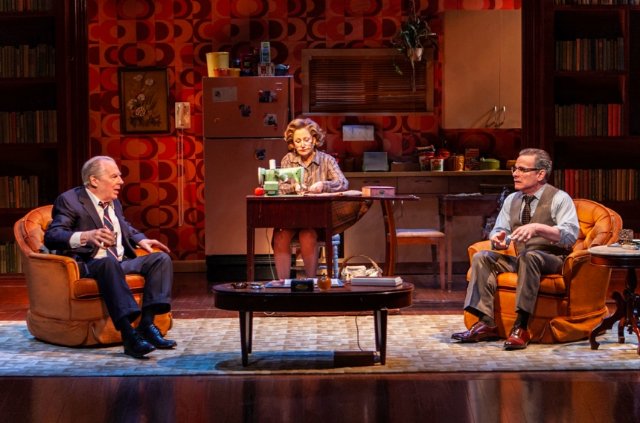 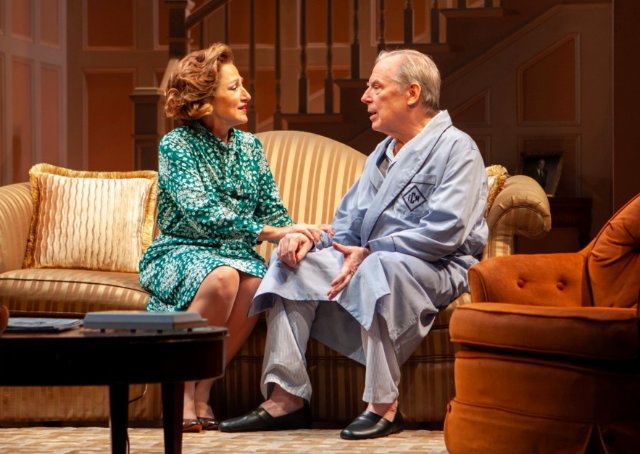 The True by Sharr White premiers at The Pershing Square Signature Center. Edie Falco headlines the New Group's show. She is a tough talking Albany political figure in 1977, the year that Danny O’Connell, for over half a century the head of the Albany Democratic machine, died. Falco says of director Scott Elliott, "I'd never worked with him before. Holy Mackerel, he is good!"

Erastus Corning, Mayor of Albany for four decades, was O’Connell’s man and Polly manages him. O’Connell had promised Erastus he could keep his job until O’Connell stepped down. He died instead and the playwright speculates that Charlie Ryan, his successor, ran Howie Nolan, a Ryan favorite, against Erastus.

Michael McKean gives us Erastus, somewhat stooped now and trapped by his wife, who imperiously floats once across the stairs and front hall of their home, as Erastus fires his long time campaign and staff chief, Polly Noonan (Falco).

Falco wraps herself, and particularly her tongue, around a barrage of curse words that make her sound like political operative Mary Matalin. Polly is the center of a triangle. The two men in her life, Erastus and her husband (Peter Scolari), hang on her apron strings. Falco has no trouble doing business in the kitchen, which places the play in time past.

Erastus needs Polly for his success. Husband Peter may be relieved that his over active wife has more than enough to do. We enter this world as rumors of an affair between Erastus and Polly swirl over his campaign. If she is going to stick with her husband, Mrs. Erastus insists Erastus dump Polly. He does, but his campaign against new Ward favorite Howie Nolan (Glenn Fitzgerald) tanks.

Polly’s men do not seem to care much about suggestions of impropriety, although we are told they do.

The most interesting scene is with the new Albany boss, Charlie Ryan. John Pankow gives a fully rounded performance in which we get a glimpse of Ward politics at its heart. O’Connell and now Ryan are the main stop for Democrats on the way to heaven through public office. In their office was the largest safe outside a bank vault. How did the ward bosses get money? If you back someone for office, and they win, they give you a year’s salary. Lies are the leaders' business because without avarice there would be chaos at City Hall. William Kennedy portrays this world wonderfully in his novels.

The Albany world through much of the 20th century was a place in which a rooming house had six cots and 62 voters. O’Connell is thought to have murdered gangster Legs Diamond. After Legs’ body was found, it took three hours to call the police. No investigation could be held. The question, was of course, why waste time investigating when you know who committed the murder. The cops said, “Whoever did it, give him a medal.” In one district of the Ninth Ward Republicans got no votes at all. It was explained that the Republican line was soldered.

In Polly’s time, honesty was no substitute for experience, and Polly is an experienced master.

Derek McLane has created a complex set, in which interior rooms move seamlessly from one house to another.

Our current hunger for explanations of how politics work finds an audience eager for the events unfolding on stage. An incidental fact of Falco’s character is that Polly is the real-life grandmother of Senator Kirsten Gillibrand. Caveat emptor.