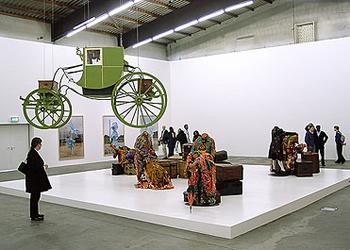 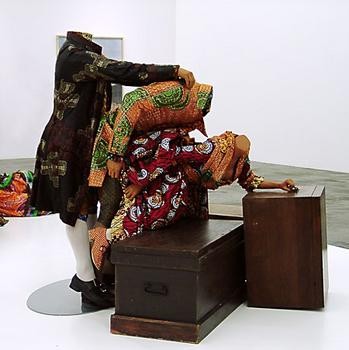 The sun also rises on the British Empire.

In the context of the strident and controversial Sensation exhibition featuring the collection of Charles Saatchi at the Brooklyn Museum in 2000 the single work on view by Yinka Shonibare (born in London, 1962) was subtle and possibly even sly and subversive. Compared to being clobbered by Damian Hirst’s tanks of sharks and split farm animals the work of Shonibare, hardly remarkable in such a busy and provocative context, had a way of sneaking up on you. It lingered in the back of the mind only to be reinforced by later experiences and encounters with it.

That first view was both amusing and puzzling. It is best to know some art history when confronted by this British artist who was raised in Lagos and returned to London to study at the prestigious Goldsmith’s College of Art from 1989-1991. Prior to that, he studied at Bryan Shaw School of Art in London from 1984-1989.

The piece in the Sensation exhibition was a send up of my favorite painting by Gainsborough, that most British of artists, Mr. and Mrs. Andrews. The original painting depicts the fashionable couple on the land of their country estate. She sits demurely on a bench in a day/ garden outfit while he stands casually to her side with a shot gun under his arm and an affectionate hound nuzzling his leg. The work speaks volumes about the nature of the British aristocracy which, because of Magna Carta and the creation of a Constitutional Monarchy was not required, like their French counterparts, to live under the nose and absolute control of the King. The British, such as the Andrews, could enjoy casual country life and then come to London for the season in their Town Houses. So, the Andrews depict country life in the manner that Gainsborough’s "The Morning Walk" represents city life.

But in that memorable work the artist deconstructed the icon of Gainsborough by decapitating the couple, an oblique reference to the era of the French Revolution although the British kept their head, and then dressed the life sized mannequins in “African” cloth, which turns out not to be African at all. Although it is widely and proudly worn in African and is indeed a signifier of African pride and identity.
File that notion under the theory of Post Colonialism and the real smart thinking that informs and underlies the disarmingly easy access to the work of Shonibare. To properly absorb his work one must not only be familiar with works of French Rococo and British Georgian art but also a ton of theory.
In the catalogue that accompanies the exhibition, on view in Vienna through September 5, the artist states in an interview that while at Goldsmith’s he drank of the mother’s milk of Derrida as well as the classic study, Orientalism, by Edward Said.

The many posters plastered along the streets of Vienna depict floating Astronauts garbed in that signifying colorful African “Dutch Wax” cloth which is not authentic, hand made batik, based on Indonesian origin, but actually manufactured in GB and the Netherlands and then exported to African consumers. Hence the clever double entendre of the title of the exhibition, “Double Dutch,” which cuts both ways as both African and surrogate for colonialism and all that entails.

“In a way, when people see an artist of African origin, they think: oh, he is here to protest,” the artist is quoted in the catalogue. “Yes, okay, I am here to protest, but I am going to do it like a gentleman. It is going to look very nice. You are not even going to realize that I am protesting, you are going to invite me to your museum because the work is nice, and when I am inside it is too late. But I have to do it nicely- because if I am already coming at you with a knife, you’re going to send me away.”

Actually, the work is way better than nice. Just visually it is gorgeous, colorful, stunning and often hilarious. It is very slick, elegantly crafted, and has superb production values. Clearly, the artist is successful enough to afford the very best photographers, and craftsmen to execute the works under his direction. This is particularly true of elaborate set pieces involving mannequins and sculpted animals. For example, several Georgian gentleman engaging in a fox hunt including a few elaborately crafted hounds. In another piece, a woman in long sleeved, floor length dress, Leisure Lady, 2001, is walking a troika of Ocelots.

The exhibition, the most in depth and beautifully presented survey of the work that I have seen to date, included two suites of staged photographs. In both themes the artist is himself the key player in costume. He attributes this to the influence of Cindy Sherman. But beyond that there is the racial Double Dutch of posing a black African man as the key player in the Dorian Gray series, 2001, and as the rake in Diary of a Victorian Dandy, 1998, which plays fast and loose with the satirical painter Hogarth. In such historical works, a black man appears, if at all, in a minor role as a servant. Here he is the protagonist and white servants bow and scrape in his attendance.

“Actually, it is funny, for it is a sort of love-hate thing,” the artist states in the catalogue. “Living in England with my colonial relationship to this country, one cannot escape all these Victorian things, because they are everywhere: In architecture, culture, and attitude. Initially, my approach was to hate all this and ignore it. But then I thought: Perhaps one should try to actually understand it and see what one can do with it.”

It was important to reencounter "Gallantry and Criminal Conversation" which was commissioned for, but hideously installed in, Documenta 11. The piece entails a large circle with 11 headless mannequins dressed in Georgian garb in a range of erotic couplings in every possible combination. Also, part of the work was stacks of trunks and luggage. Hovering above was a life sized coach minus the horses. Apparently, it references the idea that during that era young adults went on a Grand Tour in which they both saw the world and experienced life (and sexuality) before returning home to assume roles as proper ladies and gentlemen. Arguably, it is a surrogate for that kinky dark side of the seemingly reserved aristocracy. Like all the traditional physical and sexual abuse in the public schools intended to form the statesmen and soldiers who built an Empire. On the playing fields of…etc. Oh how they played. It was all so pervy as Shonibare reveals to us.

The initial response was raucous humor. It was one of the most insightful and memorable works in the last Documenta. But poorly installed, jammed into a cluttered space with distracting other works, and really pathetic lighting. Here the piece was powerful and stunning. One could truly appreciate it where the big shows like Documenta just tend to throw a lot of stuff at you. While it is useful to get a broad overview it takes well curated shows such as this to present the work in an appropriate context and setting.

At the Kunsthalle Wien, in the new Museum Quarter in what were formerly the Hapsburg Stables, one may encounter contemporary art under the best possible conditions. The Kunsthalle is flanked to the left by the new home of the Leopold Museum, this time featuring a dense survey of Goya prints, and on the other side, by the fabulous new home of the Museum of Modern Art with a superb special exhibition of contemporary portraits, in addition to several floors of its permanent collection. Once again, when it comes to high culture, Vienna gets it right. What a magnificent city. But, oh so complex.