Raise a Glass to Michelangelo 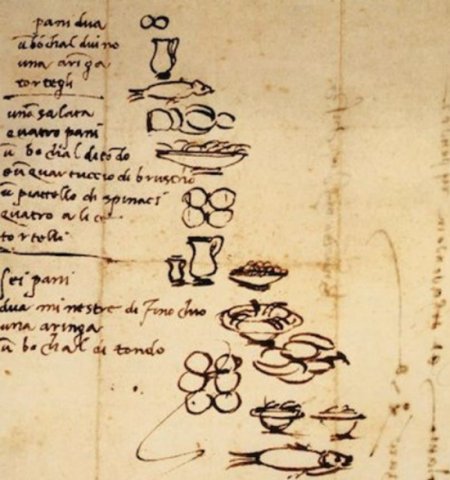 Michelangelo at the Getty Museum

Ever wonder what the great artist, sculptor, architect, painter and poet, Michelangelo, ate and drank?

According to his handwritten, and illustrated, 16th century grocery list, the Master thrived on a diet of fish, bread and lots of wine.

Clearly the artist wasn’t doing his own grocery shopping. The illustrations were for his illiterate servants to show them what to buy on their trips to the market. The 500-year-old shopping list, housed in the Casa Buonarroti Museum in Florence, Italy, includes requests for such items as pani dua (two loaves of bread), un aringa (a herring), un bocal di vino (a quart of wine.)  The drawings are actually rough caricatures in pen and ink. Bread rolls are quickly-sketched circles. Two dishes of stewed fennel are drawn side by side. When he wanted a smaller amount of wine he drew both a large jug with the smaller one next to it.

By the time the surviving grocery list was penned, the artist had completed his most famous works: the David, the Peita, Bacchus and of course the Old Testament frescos painted on the ceiling of the Sistine Chapel in Rome’s Vatican Museum – probably  the most important series of paintings in the entire world. (Contrary to popular belief, he did not paint the legendary frescos lying on his back; rather, standing upright with the use of a devised wooden scaffold.)

The fact that the shopping list, dated 1518, has survived at all is somewhat of a miracle. Only about 600 of Michelangelo’s sheets of drawings and sketches exist.

Shortly before his death, in 1564, he built two bonfires and torched most of his preparatory drawings and other papers. Why? Simply put, to maintain his reputation. Michelangelo was lionized during his long life. He was referred to as Il Divino (The Divine One.)  He worked hard to foster the illusion that his masterpieces were envisioned in his head and popped out perfectly, with little effort. Therefore he wanted to keep his non-masterpieces private, not letting the public see the effort it took to achieve his greatness.

And with his greatness came money. Tons of it. He was the highest paid artist of his day.  He received gigantic salaries and fees for his work. He also received untold amounts of goodwill cash and gifts from grateful popes (he worked for ten of them,) and princes.

Then why was the grocery list scrawled on the back of a letter? Paper in those days was not cheap. In spite being the richest artist of his time, Michelangelo was a miser. When his father asked for a bit of help, he melodramatically responded: “I don’t have any money. What I am sending you now I tore out of my heart and it doesn’t seem right to go begging.” He once told his apprentice, Ascanio Condivi: “However rich I may have been, I have always lived like a poor man.”

Michelangelo passed away in 1564, just weeks short of his of 89th birthday. The “poor man” seems to have socked away a tidy nest egg. According to Art Historian Rab Hatfield in his book, “The Wealth of Michelangelo,” he left behind an estate worth 50,000 florins – about $50 million in today’s money. How does Hatfield know all this? He was able to track down  two of Michelangelo’s bank accounts along with several deeds of purchases.  “When I saw the figures I forgot all about the ceiling,” says Hatfield.

Michelangelo did manage to write out a simple Will: “I leave my soul to God, my body to the earth, and my material possessions to my  nearest relations.” In addition to the money, these possessions included four farms, a vineyard, real estate in Rome and Florence, a cheese cave and an orchard.

On October 4th the Getty Museum invites you to raise a glass, or two, to Michelangelo by joining Fred Plotkin, specialist in Italian gastronomy, opera, and history, along with Getty drawings curator Julian Brooks, as they travel back in time to explore the fascinating connections between art, food, drink, and this incomparable Italian Renaissance artist.

Audiences can live chat with presenters during the premiere. This program is part of the Drinking in the Past series and complements the exhibition Michelangelo: Mind of the Master.

The Wine
Discover three wines that would have been familiar to Michelangelo. Get all three in advance, select one, or just grab a glass of whatever you have at home – preferably Italian!

The Food
Enjoy some tasty Italian cheese and bread with your wine (Michelangelo did). We suggest:

• Pears: Forelle, San Martino, and/or other

The Fun
Explore this downloadable pdf for wine notes, tasting cards, and a few Renaissance etiquette tips to get the festivities started.

(All images for the article are permission of the Getty Museum.)