John Cage a Genius for Eternity 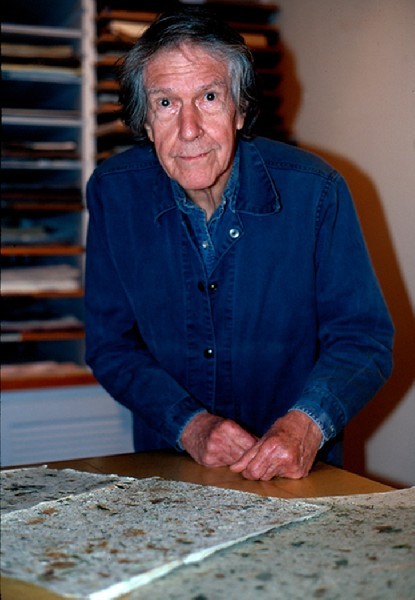 John Cage (Los Angeles 1912-New York 1992) is a name familiar to many but well known by few. This is mainly due to the fact that the conceptual artist  a brilliantly handled the status of the avant-garde art, and only rarely or never compromised.

Some 30 years ago I met him at the museum in Lucerne, where his manuscripts and scores, regarded as a concept and Fluxus drawings  were exhibited. Cage was an  approachable artist., Only a limited group of people in  the art world believed in him at that time.

Avid collectors acquired his work as relics. The cadre of  "fanatical fans" cherished him  because of  so many new and unfamiliar factors in the work and what they meant. Despite neglect and misunderstanding Cage  engaged in many exhibitions and experiments. His work was present in most Fluxus exhibitions, an art movement with which he was originally associated. His work was by its extreme  nature is not in the spotlight. Moreover, he took an extreme position with little or no concession to the public. His biography, in hindsight, is impressive.

In Belgium, there was a little or no place for John Cage. Lp's of his sonorous works were untraceable and therefore it was obliged to go abroad or to acquire them directly from the publisher. Today you'll find CDs by the master in any self-respecting trade places.

Cage was rarely invited into our country. In 1958, on the occasion of the World Exhibition in Brussels, he gave one of his famous "lecture" rallies in the Philips Pavilion. The "lectures" contain a reading of John Cage about sound. Music of his hand was simultaneously carried out by his mate David Tudor. They were released by Folkways Records in 1959 on a double LP. Karlheinz Stockhausen published the manuscripts of the Brussels' lecture in his journal “ Die Reihe ". When Stockhausen informed Cage that he  "would" publish the lectures Cage replied that he would be better to wait until he had read them. To this Stockhausen replied "no, I publish them”.

Cage's work is extremely accessible but very challenging to experience. It is not like looking at a painting or listening to Stravinsky. Necessary in the work of Cage was imagining a world that even in dead silence arouses tensions. There  is his famous composition 4'33 "(1952) in which a pianist sits behind a grand piano and plays nothing during that time. The background noise in the hall, which arises during the performance of 4'33 ", were a part of what Cage wanted us to feel and experince. There is a score for the work which is precise but all of the notes are silent.

It is clear that Cage and his conceptual approach to the processing of sounds influenced many contemporary developments in the art world. Silence and timing have become familiar concepts. The interesting and much debated question entail is what Cage created identifiable as music?

Cage created sound fiels within a volume of space. In his earliest work he created an 'Imaginary Landscape,' 1939, which he returned to in  1951 with 'Music of Changes'. Harmony is definitely not among the merits of his work. Cage used the elements of chance and play here. It seems to me that the presence of Fluxus was a major factor in his substantial oeuvre. Only later will he go in search of more fixed composition with minimal lasting interventions, although coincidence works until the last moment continued to dominate.

Cage plays, or his mate David Tudor, the most unorthodox instruments, from anvils to the drum brakes of cars. These were used as percussion. The most famous are the "prepared piano” and computer generated instruments. The prepared piano refers to the strings in the piano that Cage worked by introducing various types of materials such as felt and screws between  the stops. In his work "Imaginary Landscape No. 4 for 12 radios and 24 performers"  the players operated the sound buttons. The performers were instructed to select broadcast locations according to precise insttuctions as to timing and volume. They also walked randomly about the recital hall.

For  his lectures at the New York School for Social Research (1956-1960)  they were also portrayed as performances. In fact, his entire oeuve in the art world, was an extended conceptual performance. For example, he randomly selected  from his mailbox and sforwarded the material to several universities as a conceptual work. Similarly Andy Warhol put much of his mail in boxes which he stored as “Time Capsules.”

The genius of Cage place in contemporary art sticks out like a sore thumb. For several months traveling in Europe, starting with the MACBA in Barcelona, there is a wonderful exhibition  now on view in the Dutch town of Heerlen. The exhibition "The Anarchy of Silence - John Cage and Experimental Art”  confirms his status in an unprecedented way.

This exhibition also shows how, in parallel with the artists of his time, their work is interpreted. Figures such as Jackson Mac Low, George Brecht, Dick Higgins, Allan Kaprow, Merce Cunningham, and even Robert Rauschenberg and Ellsworth Kelly, were close to him. It is also the generation of "experimental art" with performances and happenings.

Nobody could say with certainty where the movement and writing would end. Or, what its impact would be on the further course of artistic development. This was the reason that many museum took a  wait and see stance. This exhibition shows that there was a gross underestimation of the experimental art of the last century and especially that of Cage.

That he maintained a good relationship with the father of the 'readymade' and the  founder of the ‘conceptual art’, Marcel Duchamp, seems both  self-evident as well as  not so evident. Both Duchamp and Cage sustained throughout their careers "loyalty" to the "experiment." They took the element of chance as the highest goal to be achieved in art. It is given to few artists to resist the temptation of the art.

Following van 'The Anarchy of Silence, John Cage and Experimental Art " in Heerlen SCHUNCK * is an 'open call' project. Artists inspired by John Cage's revolutionary ideas can submit a project. The selected entries will be at the exhibition and displayed on the site, part of it is also extended to November 28, 2010. Thiswonderful initiative may be viewed at http://www.schunck.nl

The exhibition travels to the Henie Onstad Art Centre in Norway.