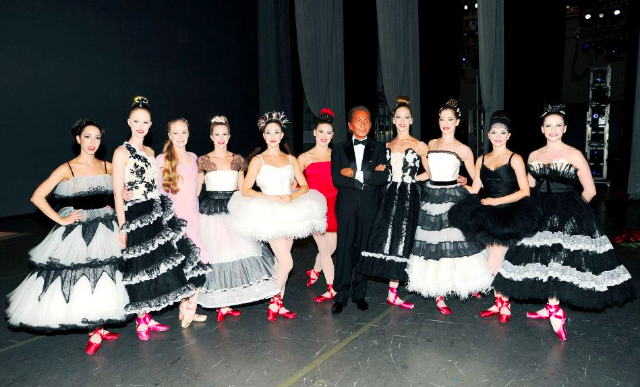 Valentino surrounded by ballerinas in his costumes. 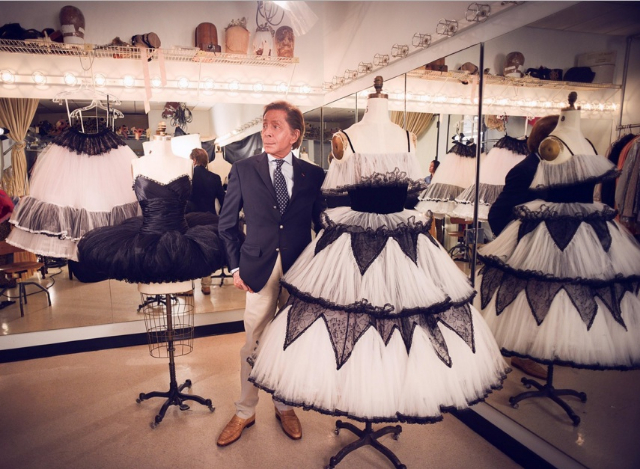 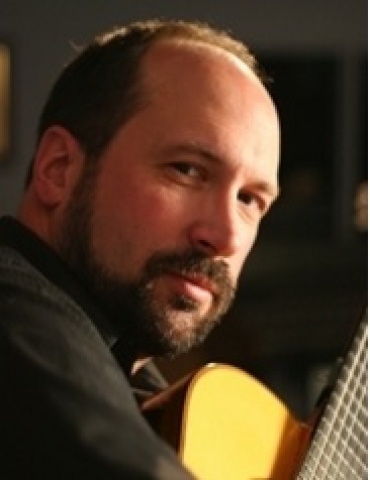 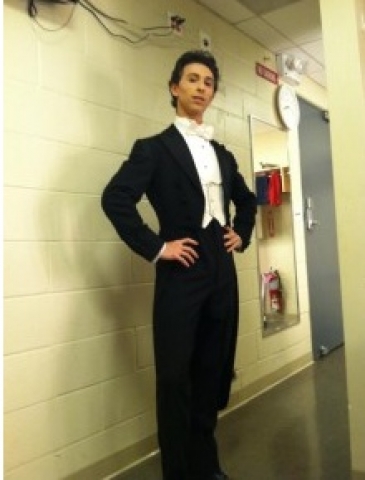 Spartak Hoxha was particularly dashing and electric in Walker's 'ten to seven.'

Although the event left, the Fashion Gala continues. A wonderful case is made for the use of high fashion costumes in ballet.

This year’s gala reprised a ballet created by Peter Martins with costumes by Valentino Clemente Ludovico Garavani, better known simply as Valentino. There is nothing simple about the ballet wear created for Bal de Couture. Set to Tchaikovsky’s dance from the second Act of Eugene Onegin, long black and white gowns floated with the ballerinas. Designs varied adding to the visual pleasure. As the dancers leap, the red underskirts are revealed. Red toe shoes dotted the horizon. Red whisked by wherever you looked.

Even the more conventional tutus were eye-catching. Multiple layers of red tulle appeared to support the floating dancers.

The Tchaikovsky music, which reminds one of the joy of dancing, and also Tatiana’s pain at the hands of Onegin, only adds to the deep pleasure of the Martins’ choreography.

In this piece, all the elements work together to provide jaw-dropping eye candy and ear-catching musical satisfaction.   The combination of the insinuating, seductive music, exuberant dancing, and gorgeous black and white gowns which emphasized the romantic individuality of the couples, transformed a cool, observant critic into an emotionally involved participant for a few magical moments.

Peter Walker, a member of the troupe, is emerging as an important choreographer and his ‘ten to seven’ shows us why. It was easy to imagine sitting on the Santa Monica pier and looking west as the sun descends when you see the musicians perched on a platform rising above the stage, and accessible by steps. On one, Thomas Kitko sits with his electric guitar in action. Kitko was commissioned by the ballet to compose for Walker’s choreographer and his driven beats thrill.

Walker in collaboration with designer, Jason Wu, has created slashing dance. Just as Wu used electric-cool-acid slashes across black costumes, Walker choreographs in dramatic moves. Kitko’s music underscores the movements. This combination of choreography, costume and music in both ‘ten to seven’ and ‘Bal de Couture’ suggest some of the excitement aroused by the early conjunction of Russian artists in Paris.

Each ballet was introduced by a documentary on the creation of the costumes. This allowed the audience to peak into the inner workings of the ballet. Two other pieces, The Dreamers and Unframed were interesting, but did not weave the elements together as satisfactorily as the Martins and the Walker.

We expect the New York City Ballet to be the very best. It is repeatedly pointed out that George Balanchine, who made its first big mark, wanted ballet to be now. We were very much in the now at this Fashion Gala.